Did Jesus the Christ approve weapons carry?  Can a man who carries a weapon for self-defense consider himself a Christian?

Some people think not.  They may believe that since Jesus the Christ advised turning the other cheek, he was a pacifist who would not approve either open or concealed carry or weapons.

Notice that he only asked you to turn the cheek once. No further instructions are given.  Therefore, after receiving a second slap, a Christian is free to do whatever necessary to subdue the assailant.  This instruction is to show some restraint in punishing the evil doer.  If its only one slap – i.e. a minor thing – Christ tells us to tolerate the abuse and even invite another slap.  But the buck stops there.

Slapping is one thing, but violating the Law is another.  Mathew tells us  the Christ was not averse to using physical force to enforce God's Law, as shown by his overturning the tables of the money changers in the temple. 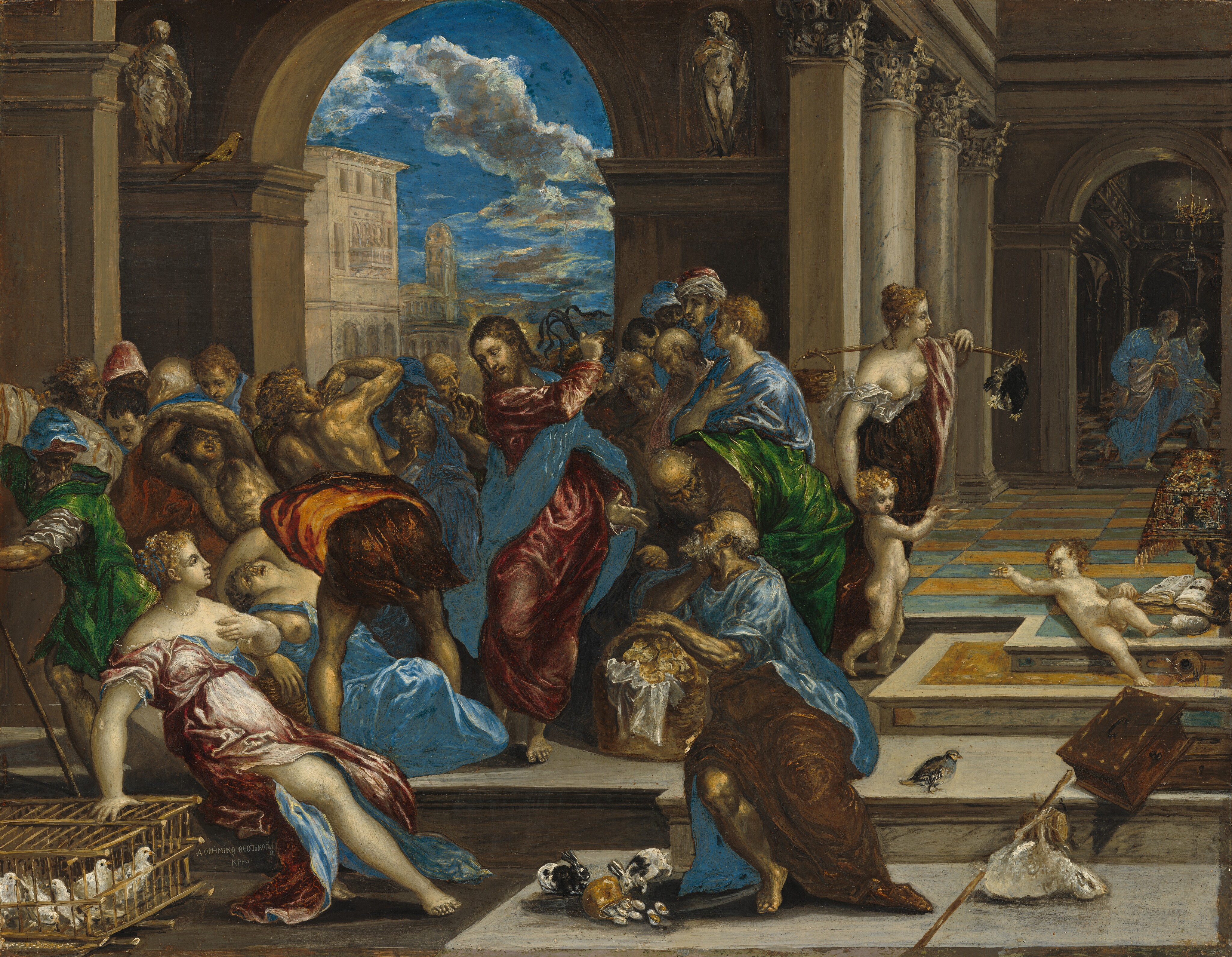 From the National Gallery of Art

Note: It is uncertain that Christ had long hair as depicted in this painting.  It was not the style of the time, and in 1 Corinthians 11:14 the apostle Paul wrote: "Does not nature itself teach you that if a man wears long hair it is a disgrace for him..."

From this account and the fact that he was a carpenter who did heavy manual labor for a trade we can gather that Christ not only acknowledged the need to use physical force to keep order in the community, but must have been a strong, well built man who commanded respect and even struck fear in the hearts of lesser men such as those he drove out of the temple.

In the times the Christ walked the earth, men habitually carried knives and swords as sidearms.  Now consider: if the Christ was an unarmed weakling, it is highly unlikely he would have been able to drive the probably armed money-changers (bankers) out of the temple.  If the Christ did not approve weapons carry it is highly unlikely he could have drove several probably armed criminals out of the temple as they would have resisted his commands and fought back.

As a carpenter Jesus the Christ would have used tools, including various blades, that can also be used as weapons.  Among his disciples were fishermen, who would have carried and used knives as a matter of course simply to carry out their work.  Moreover, men of the time also regularly used knives for both hunting and butchering animals for food.

Further, carry of weapons is not prohibited by the ten commandments:

Regarding the 6th commandment, murder is defined as the unlawful (criminal) taking of a human life, especially with malice aforethought or with recklessness manifesting extreme indifference to the value of human life.  It should be obvious that carrying a weapon is not itself murder.  Further, one does not commit murder if one either intentionally or accidentally kills someone in self-defense or defense of others threatening extreme bodily harm to another, because both self-defense and defense of others against aggressors is lawful, not criminal.  Indeed, it can be argued that it is a crime in violation of the first commandment if you do not defend oneself or other righteous individuals – to protect Life – against criminals if/when one is capable of doing so, because righteous individuals are the children and images of the Living God, and a lover of the Father should love and protect all righteous members of the family who are in spirit images of God.

Although that is plain common sense and logic, people will want scriptural proof.

Luke records Christ directly commanding his apostles to purchase swords even if necessary to sell a cloak to do so:

Further, three accounts in the New Testament confirm that at least one of the Christ's disciples was not only armed with a sword but also able and willing to use it .

It is of interest to note that Simon Peter was a very important disciple:

Once Simon Peter removed the ear of the high priest's servant,

and, according to Mathew,

Notice He told Simon Peter to put his sword back in its place.  He did not tell him to stop carrying a sword.

I take this to meant that it is lawful for a Christian to carry a weapon, but not to draw a sword and wield it against another when 1) neither your own life nor that of the any other individual is truly at stake, 2) using the sword is not the will of the LORD.  Jesus was neither a physical nor a spiritual weakling incapable of defending his own life.  As He said, he could have had more than twelve legions of angels defending him if he so requested.  Christ was fulfilling our Father's will in not resisting arrest by the authorities.  Resisting arrest would have been refusing the cup given by the Father.  I suggest this is a completely different situation from, for example, defending yourself, or a child or woman from assault or rape by a criminal.