Meat-eating increases life expectancy, according to an analysis of United Nations data published February 22, 2022 in the International Journal of General Medicine.

You and colleagues found that total meat-eating reduced childhood mortality and increases life expectancy even when they statistically controlled for influences of caloric intake, urbanization, obesity, education, socioeconomic status, and carbohydrate crops consumption. 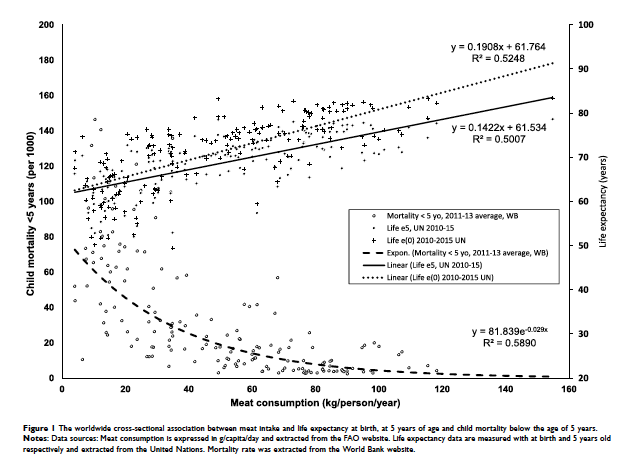 Take notice from the graph above that the lowest childhood mortality and greatest life expectancy was associated with consumption of more than 150 kg (330 lbs) meat per person per year, or about 0.4 kg (400 g; 14.5 oz) per day.  The best outcomes were associated with the highest intakes of meat.

Their other key findings included:

In their analysis, they found that consuming carbohydrate crops –– cereals, starchy roots and sugars –– was not associated with reduced infant mortality nor increased lifespan.  This indicated that the positive effect of meat-eating on life expectancy is due to its provision of vital nutrients other than calories, i.e. not due simply to caloric intake (which could as easily be provided by carbohydrate crops).

In The Hypercarnivore Diet (out of print for revision), I wrote:

Similarly, in their discussion of their findings, You and colleagues note:

As the Vedic scripture Satapatha Brahmana says, animal flesh is the best kind of food.

You and colleagues note that, contrary to popular misconceptions promoted by "authorities," we lack evidence that vegetarian diets enhance longevity.  Studies purported to find that vegetarian or plant-based diets contribute to a high life expectancy suffer from questionable study designs, including failure to account for overall healthier lifestyle patterns among vegetarians compared to general population.  Many studies concentrate on subjects not representative of the general population, e.g. Seventh-day Adventists who have healthier lifestyles, including non-smoking, marital maintenance, regular exercise and maintaining a health body weight.

Further, they note that vegetarians may be able to maintain ‘health’ on their diets only when they avoid meat-related nutrient deficiency in one or more of the following ways:

Exclusive carnivores do not have color vision, sweet taste receptors or enzyme systems dedicated to metabolism of dietary sugars.

These are just a few of the features of human biology that indicate that we are by Nature designed for a diet of meat and fruits.

In addition, many studies also link fruit intake to health and longevity.  A review of research on the health effects of fruit consumption concluded that we have evidence that regular consumption of fruits may protect against many degenerative conditions including:

The Global Burden of Disease Study estimated that in 2017 about 2 million deaths and 65 million disability-adjusted life-years were attributable to low intake of fruits.2