Was it low carb, keto, exclusive carnivore, or meats & sweets?

Some people have circulated memes suggesting that the 1970s American diet kept people lean because it was relatively low in carbohydrates and plant-based foods compared to the 21st century American diet.

Photos like the one below are circulated to demonstrate how the American diet of the mid-20th century kept people lean: 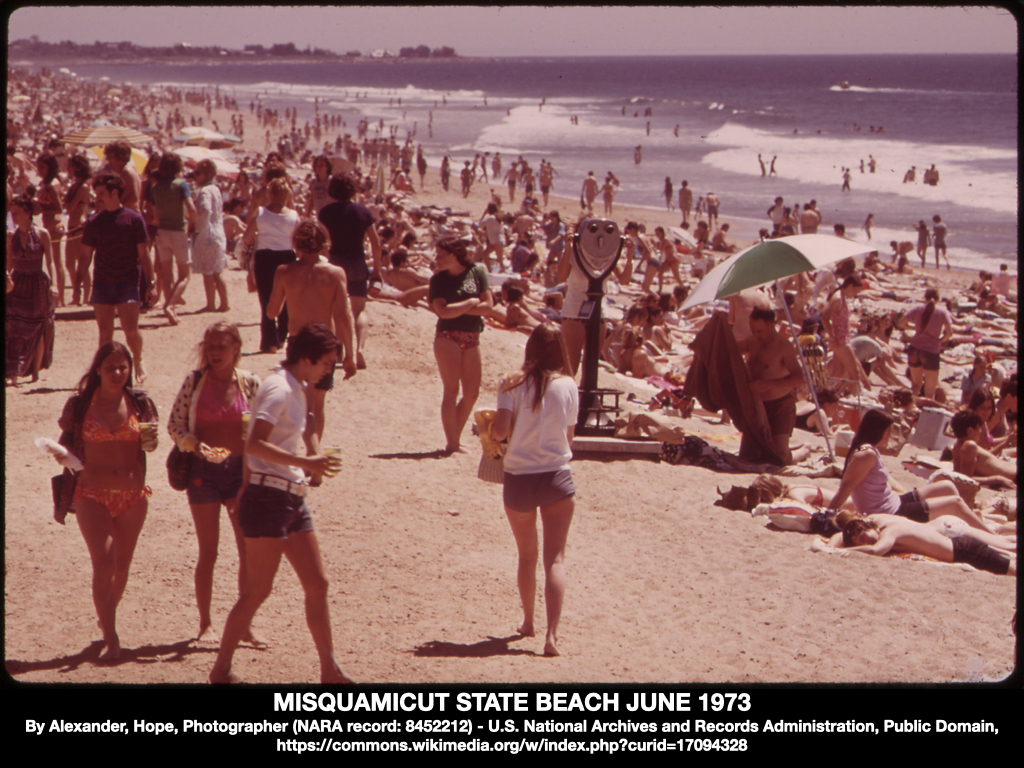 I remember those days.  I lived through them and can confirm that extreme overweight and obesity were uncommon.

Some memes suggest the American people were lean in the 1970s because they ate lots of meat and fat and little carbohydrates.

But was the 1970s American diet low in carbohydrates and plant-based foods?  Let's find out!

A study published in the journal Cancer Research in 1975 provided the following data on the 1950-1970s American diet: 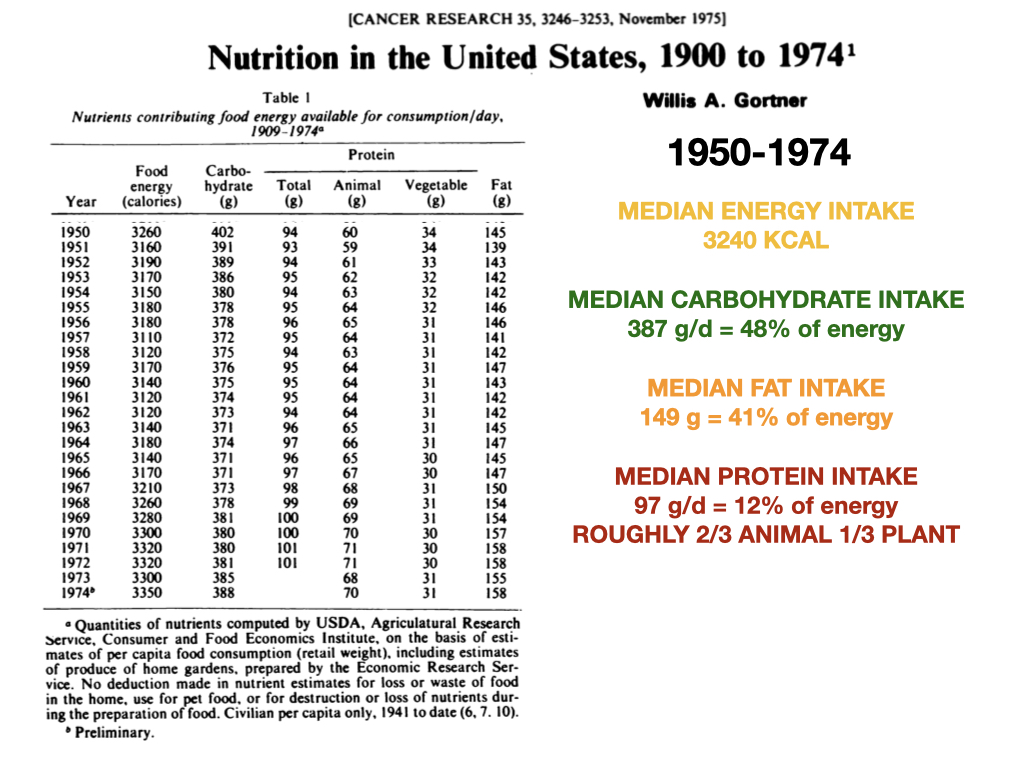 Clearly, between 1950 and 1970, the American diet was not low in carbohydrates.  Carbohydrates provided a median of 48% of daily dietary energy during this time period.  I don't think anyone would call this a low carbohydrate diet. 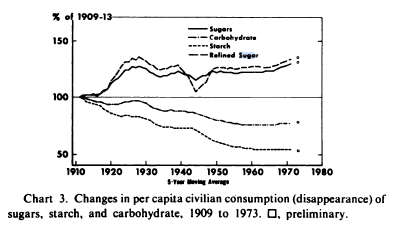 Moreover, the 1970s American diet was not particularly low in sugars.  Between 1900 and 1965, sugar consumption increased while starch consumption decreased.  Indeed, Gortner states that "Starch has dropped off at a much more rapid rate than the total carbohydrate during these 6 decades.  The rather marked rise in sugars and refined sugar that occurred during the 1920's has (after a decline during World War 2) been maintained in the years subsequent to this." (italics added)

The median fat intake was 149 g per day, or 41% of dietary energy.  I don't think anyone would call this a low fat diet (typically defined as less than 30% of energy per day), but it also is not a high fat diet such as recommended by advocates of ketogenic and carnivore diets (60-80% of dietary energy).

Here's the amounts of fats consumed by sex and age groups: 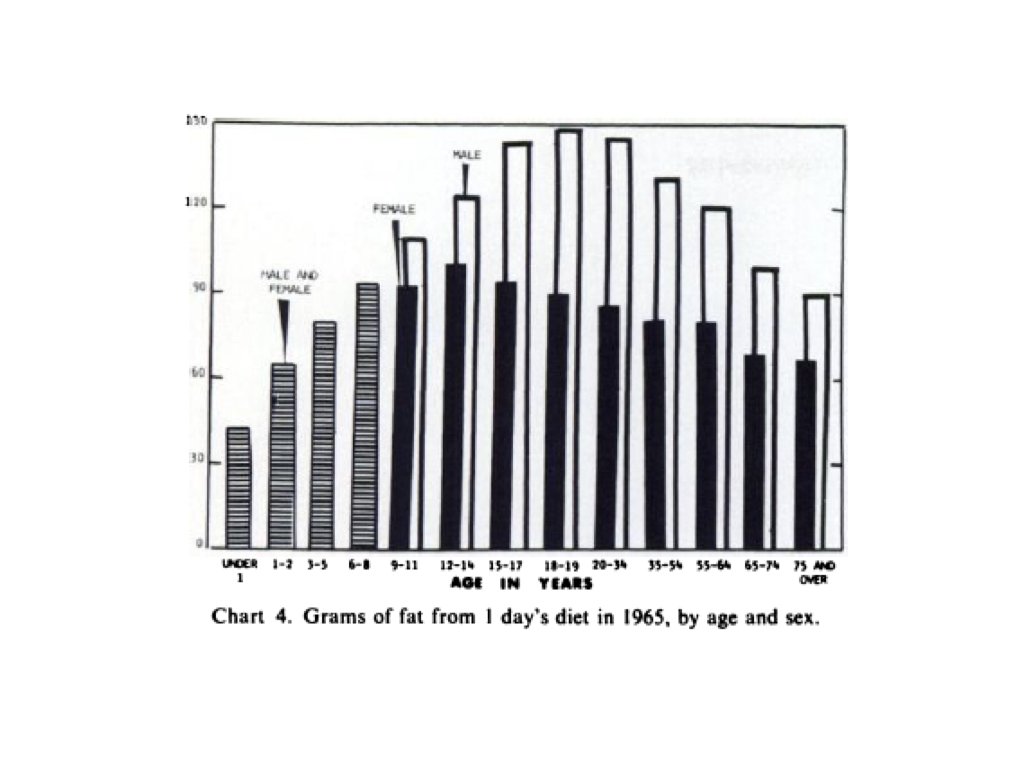 Thus, between 1950 and 1975 there was "a noticeable increase" and "steady and marked rise" in dietary intake of omega-6 polyunsaturated fatty acids from plant-based seed oils and hydrogenated plant fats, yet the people on the beach were still quite lean despite 20 years of rising seed oils intake.  Hence the 1970s beach scene meme probably doesn't provide evidence that the people were lean because they did not eat omega-6 seed oils.

I remember those days; I was in junior high and high school.  My mom cooked with vegetable shortening, we used margarine, and we used vegetable oil for cooking and salads.  I'm not advocating use of hydrogenated oils or indiscriminate use of plant seed oils, but I don't find photos of the 1970s beach scene a convincing conviction of polyunsaturated fats.

The median protein intake was 97 g per day, only 12% of daily dietary energy.   The 1970s American diet provided more than the recommended daily intake of protein, but it was not particularly high in protein or a "high protein diet" by standards of advocates of low carbohydrate diets. 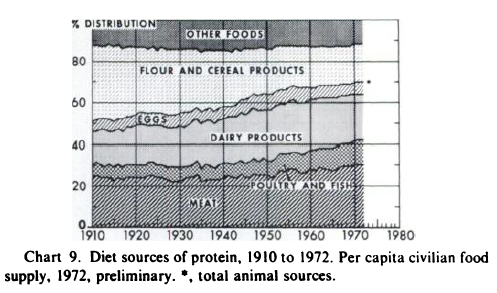 The 1970s American diet did not exclude animal foods. 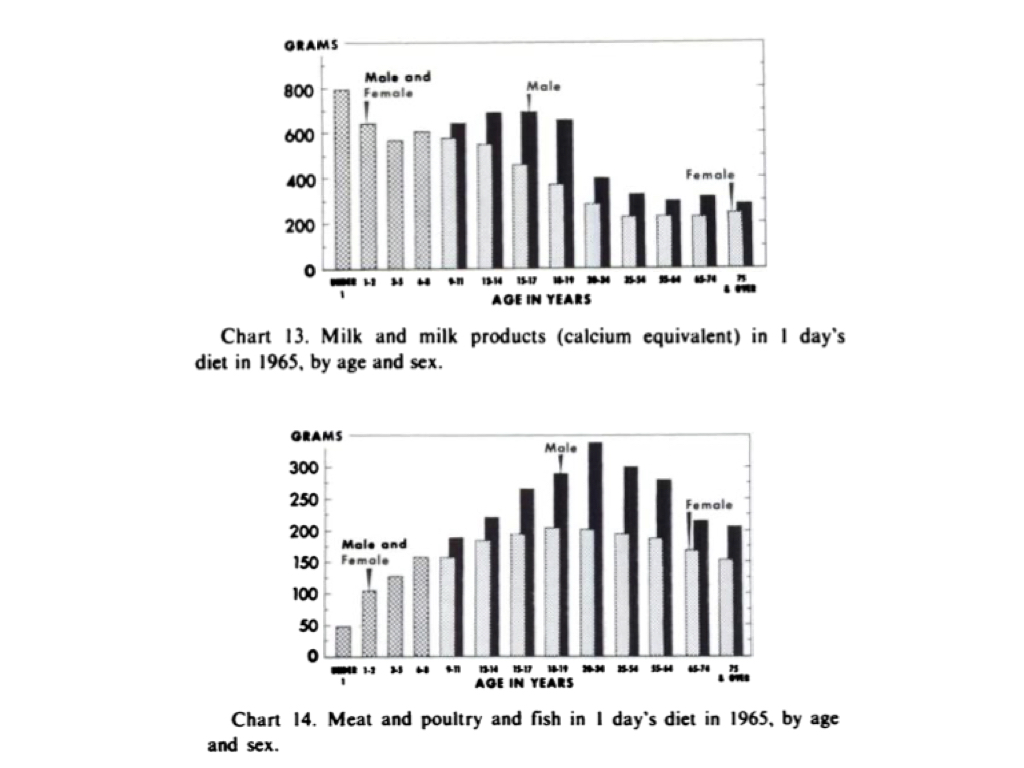 Men and women greater than 25 years of age consumed about 300g and 200g of milk and milk products daily, respectively.

Clearly, most Americans were (are) carnivores – they ate/eat meat – but they were/are not exclusive carnivores/plant-avoiders.

They weren't excluding lectins from grains, tomatoes or potatoes either. 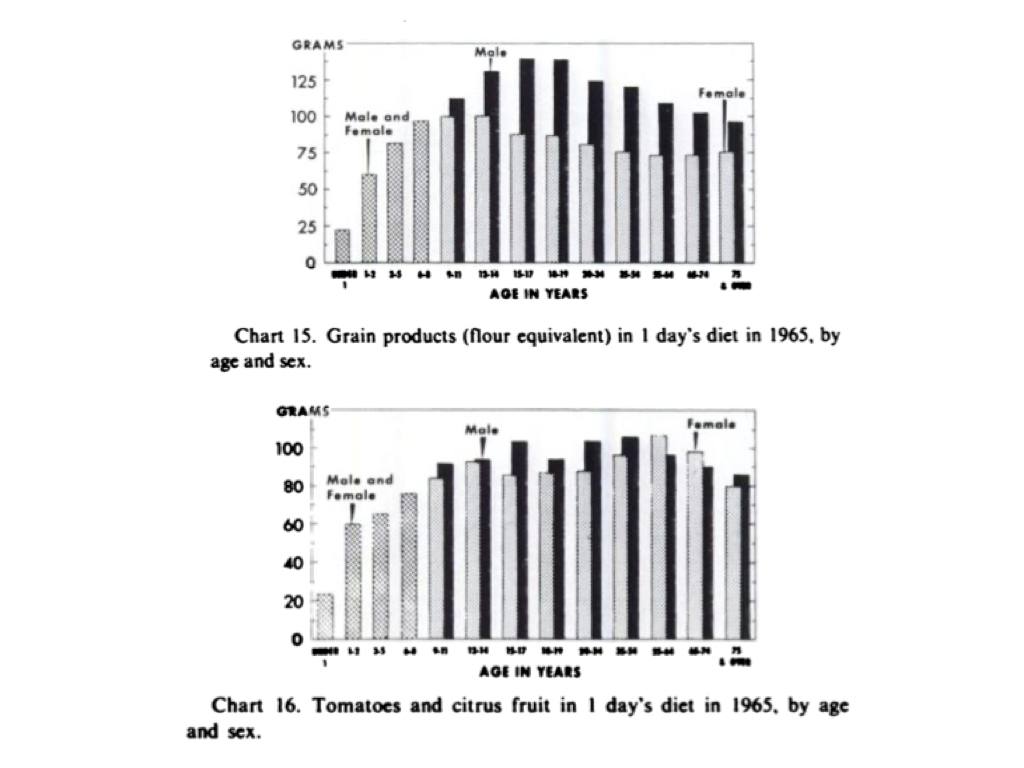 Women and men over the age of 25 consumed about 75g and 100-125g of grain products daily, respectively.  Since white bread was the most commonly consumed grain product in the 1970s American diet, and a slice of bread weighs about 25-30 g, this indicates that women and men consumed about 3 and 4-5 slices of white bread daily, respectively, when everyone was so lean at the beaches.

Both men and women were consuming about 70-100g of tomatoes and citrus fruit daily.  Apparently the tomato lectins and citrus fruit sugars that are allegedly so harmful to people in the 21st century didn't make people overweight in the 20th century.

What about the antinutrients in green and yellow vegetables or the starch in potatoes? 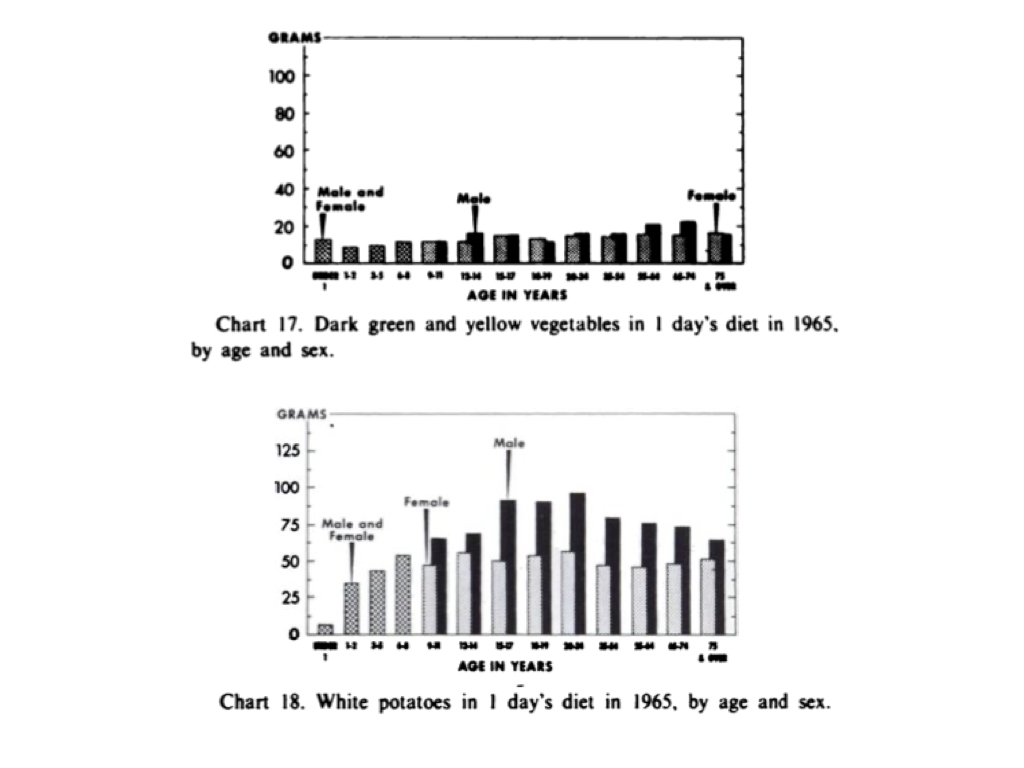 Regardless of age or sex, in the 1970s American diet the daily intake of green and yellow vegetables did not exceed 20g.  That's less than one ounce.  They weren't eating greens by the bunch, or drinking green smoothies.  Yes, I remember.  We ate green stuff 2-3 times weekly and carrots the same.

The 1970s American diet memes I have seen are circulated by advocates of animal-based diets that restrict sugars, starches, and plant oils.  The meme-makers suggest that the people eating the 1970s American diet were leaner than people today because they didn't eat much sugar, starch or plant-based fats, but ate diets high in animal fats or animal protein or both.

The above data on the 1970s American diet fail to support the hypothesis or suggestion that the people on the beaches during the 1970s were lean because they ate very high animal protein diets, or little or no sugar, seed oils, starch, or plant foods in general.

Human milk supplies 39% of energy from sugar (lactose), 55% from fat, and 6% from protein.  This is a food designed to satisfy human needs.  The 1970s American diet had a remarkably similar macronutrient profile at 48% carbohydrate/sugar, 41% fat, and 12% protein.

One might hypothesize that the 1970s American diet prevented overweight and obesity because, like human milk, it provided 'enough' protein, total, saturated and unsaturated fat, and carbohydrate, including sugars, along with micronutrients, to satisfy all tastes and nutrient needs, and thus prevented cravings that lead to chronic overeating.

However, regarding the beaches full of lean people,  few if any overweight or obese, I must also say that it is possible that most of the people found on the beaches during the 1970s were lean largely because they were young and active, and most of those who were not young, active and lean just didn't go to the beaches because they didn't want to be seen in a bathing suit.