Chin ups – a.k.a. supinated grip pull ups – are my preferred vertical pulling exercise for building strength and size in the upper back, biceps and forearms.

Why I Prefer Chin Ups

If you have time for only one vertical pulling exercise, choose chin ups over all others.

A supinated grip – palms facing towards you – puts the biceps in their strongest pulling position.  That means you can train with more load and repetitions for the upper back as well as the biceps.

Most people do pull ups with a pronated grip, with palms facing away from you.  This puts the biceps in their weakest position.  Consequently you have introduced a weak link into training the upper back; by using a pronated grip you can't generate as much bicep force, so you are limiting the load you can impose on your upper back.

In addition, the pronated grip is inferior for training the biceps.  If you try to contract your bicep with your palm in a pronated position – such as a reverse curl – you will find that you can't contract it as fully as if you supinate the palm.  This is why we do bicep curls with a supinated grip!

By performing EMG experiments, Bret Contreras found that the weighted chin up strongly activates both the latissimus dorsi and the biceps.  The weighted chin up was superior to all other upper back and bicep exercises for both muscle groups.

Yes, chin ups produced greater activation of the biceps (mean and peak values) than all bicep curl variations.  Research has shown that if you do progressive weighted chin ups, you may not need bicep curls.1  As Arthur Jones wrote, when you get to the point where you can do 6-10 one-arm chin ups – or 6-10 chin ups with an additional load equal to your body weight strapped to your waist – "your arms will leave very little to be desired."2

Chin ups are most comfortable performed on rings or a suspension trainer, which allow you to rotate your wrist to your natural position.  My power rack has a cambered bar which is also more comfortable than a straight bar. 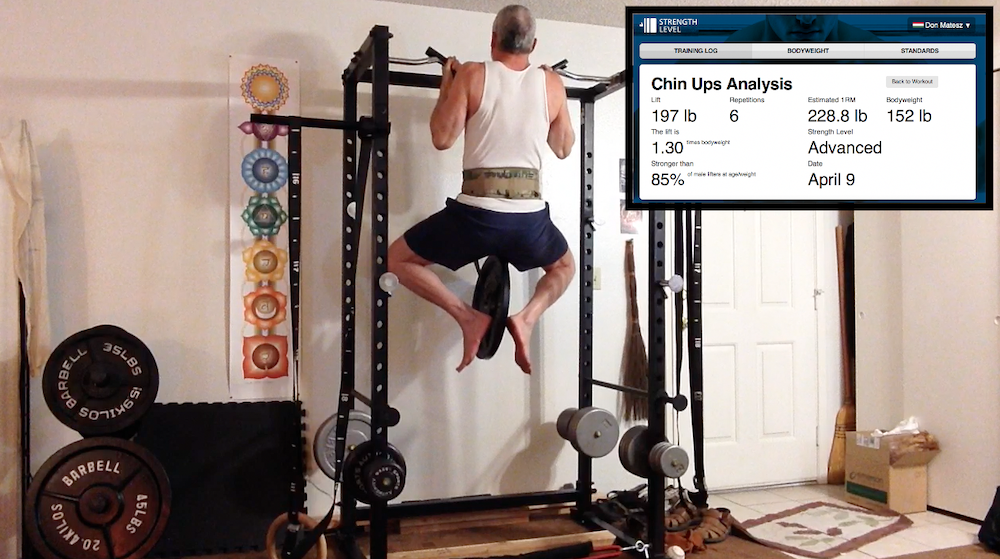 Once you can perform 10-12 bodyweight chin ups, you progress by three main methods:

1) Improving your chin up form

(Note: I don’t recommend using elastic resistance bands to load chin ups because elastic bands have a resistance curve that is opposite to the strength curve of chin ups.)

I recommend improving form first.  When adding load, you can easily and unconsciously adopt form that on't get obsessed with adding weight at the expense of optimal form.  In the following video I discuss how I made that mistake, and found that I could eliminate the need for added resistance for bilateral chin ups by improving the quality of my chin up form.

This can lead to doing tuck 90 degree chin ups:

Working on the tuck 90 degree pull up today, after handstands, side to side chin ups and dips with embedded tuck planche. #fitafter55 #highintensitytraining #pullups #homegym #gymnasticstrengthtraining #pullyourownweight

You can progress the 90 degree chin up by going from tuck to advanced tuck, 1/2 lay, straddle and full lay leg positions.

You can also make chin ups harder by doing them in an L-sit position, and using alternating grip, which shifts more of the load to one side:

Moved beyond 6 repetitions in the side to side chin up today. I can feel that holding the pike position is a limiting factor. I might change to a set up that will allow me to have my legs hanging. #bodyweighttraining #highintensitytraining #onearmchinuptraining #fitafter55 #gymnasticstrengthtraining #grind #persist #homegym

Another way to progress is to use mixed grip eccentric chin ups:

Why Chin ups Are Better Than Rows 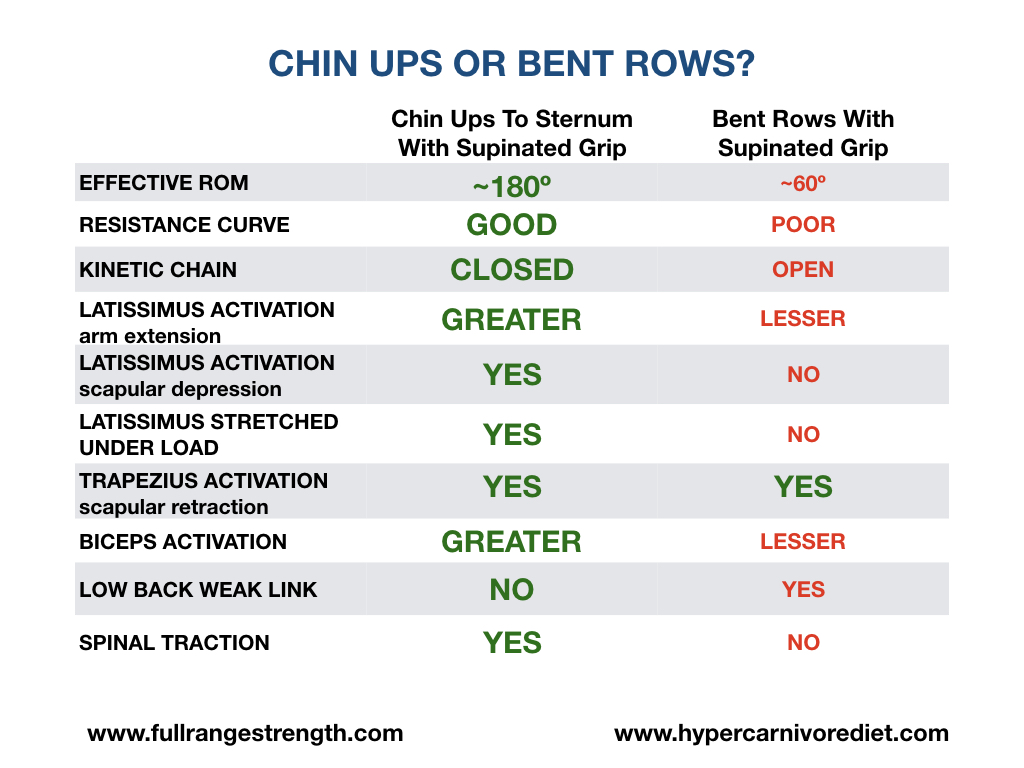 Chin ups are the best vertical pulling exercise for building strength and size in the upper back and biceps.

You train chin ups once weekly in the Gaining Strength program.  There is no reason to do inferior exercises.

2. Jones A.  My First Half-Century in the Iron Game, No. 68. http://www.arthurjonesexercise.come/First_Half/68.pdf