The Most Dangerous Superstition

Most people have been taught to believe that humanity needs to obey "authorities," "rulers" and "governments" to prevent widespread chaos and maintain civilization and moral order. In The Most Dangerous Superstition Rose clearly demonstrates that this belief and its practice ––i.e. obedience to authority–– is on the contrary the primary source of chaos and immorality.

The Most Dangerous Superstition opens with this dedication:

"Government" is also the primary agent of murder, most spectacularly through the mass human sacrifice rituals called "war."  Historical records indicate that prior to the 20th century alone, people who were "just following orders" given by their "governments" because they believed in "authority" murdered approximately 625 million people, as shown in the table below from Statistics of Democide.

During the 20th century, people who were "just following orders" of their "masters" murdered at least 262 million people:

I say at least because the numbers above appear to account only for the people murdered by agents obedient to the listed "governments" and not the people murdered by agents who were obedient to other "authorities" who waged war on those "governments."  For example, the table lists 21 million people killed by "Germany" between 1933 and 1945, but does not list the people killed by U.S. or U.K. soldiers who fought against "Germany."  According to Encyclopedia Britannica:

The Most Dangerous Superstition Punchline

Rose starts The Most Dangerous Superstition with the "punchline":

The belief in "authority" is the belief that some people have the moral right (are morally right) to create 'laws' and use force to control others.  Rose thoroughly proves that this belief has no rational foundation.  It is an article of faith, which means that belief in authority and government is a religion.

Liberals believe they have the right to use force to make everyone behave according to their "liberal" preferences.  They "elect" so-called "representatives" to use police forces to take wealth from some people (via taxes) and give it to others via schemes like 'welfare' and 'social security'; and to force people to associate (do business) with people they don't want to associate with, as in forcing "integration" of racial groups, or forcing small business owners to perform services for people they disagree with.

Conservatives believe they have the right to use force to make everyone behave according to their preferences.  They "elect" so-called "representatives" to use police forces to take wealth from some people (via taxes) in order to give it to others for military and police operations, or to "bail-out" failing industries.  Both of these are types of socialism: forcibly taking wealth from some people ––so-called 'taxpayers'–– and giving to others ––order-following police and military personnel, military equipment makers, failing corporations, bankers, etc..

Many liberals and conservatives alike will claim that they follow high moral ideals given by spiritual or religious traditions.  In reality, whenever the commands of government conflict with the commands of their avowed religion, they choose to obey human government rather than God's law.

For example, many "progressive" people also claim to adhere to the moral teachings of yoga, Buddhism, or Christianity, all of which prohibit stealing from others.  Yet progressives don't oppose taxation, which is nothing but theft.  Conservatives claim to be opposed to murder, but are also often the first to sign up for military service, wherein they will follow orders to commit murder.  Rose writes:

This reminds me of something attributed to Jesus of Nazareth:

The Greek word mamona means riches, money, possessions, property. Please note that the money he referred to was the Roman coin, an instrument by the government for the collection of taxes.  Therefore, serving money is serving government.

This is why Jesus attracted the attention of tax-collectors: he was teaching people that tax-collection was a sin.  He condemned tax-collection as a sin on par with swindling, fornication, and prostitution (Mathew 18:15; Luke 18:9-14). He succeeded in getting one of the chief tax collectors, Zaccheus, to repent and return property he had extorted (Luke 19:1-10).

Jesus knew that the kings of the earth are the true heads of tax collection.  In other words, Jesus was teaching the people that tax collectors –– including all worldly "rulers" –– are more corrupt and evil than ordinary swindlers, fornicators, and prostitutes.

Luke records the following account of the charges the Pharisees brought against him:

“Then the entire assembly of them set out and brought him before Pilate.  And they began to bring charges against Him, saying, ‘We found this man misleading our nation, and forbidding us to pay taxes to Caesar, and saying that He Himself is Christ, a King.’”  Luke 23:1-2

Jesus did not deny the tax charge!  Further, Jesus held to the Natural Law, do unto others as you would have them do unto you, which means that every man is a sovereign, a king of himself, subject (slave) to no other man. Not only Jesus but everyone is by God an anointed (christened) as a sovereign, a king (ruler) over one's God-given domain (life and property), which is why Jesus said "behold, the kingdom of God is within you" (Luke 17:21).

In other words: The only domain you have a God-given right to rule is your own life, and God has given no one the right to rule over any one other than oneself.

Neither the Pharisees nor the Romans would let this knowledge spread, for they aimed to remain "masters" and keep everyone else as slaves. They needed to crush anyone who gave the people the idea that the "rulers" had no divine right to rule and collect taxes.

Jesus was assuredly an anarchist.  He did not pay taxes and he refused to comply with orders given by either Jewish or Roman 'authorities.'  He did not run for office or seek control over the lives of others.  He taught the moral law –– God's Law –– and ignored man-made law. 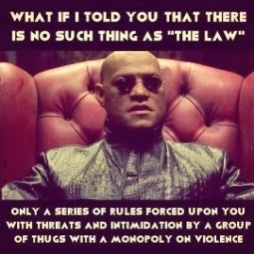 Does the idea of life without "authorities" and "government" strike you as stupid, terrifying or impossible? This is evidence that you have been deeply indoctrinated in the faith and regard unbelievers as intolerable. You really need to calmly read The Most Dangerous Superstition.  Rose observes:

Rose goes on to prove that indeed neither "authority" nor "government" has ever actually existed.  All that has existed is a near universal and very deeply held belief that "government" not only exists, but is the true savior, protector, teacher, and master of humanity.

You Can't Have Liberty and Authority Too

Read The Most Dangerous Superstition!

The Most Dangerous Superstition has four parts:

In Part I Rose proves that the belief in authority is a superstition or religion and irrational.

In Part II Rose proves that no one has "authority" over others and no one can grant such "authority" to anyone else by any ritual (such as 'elections').

In Part III Rose discusses all the ill effects of the superstition, including: the effects on the "masters," the effects on the enforcers (police and military), the effects on the targets, the effects on the spectators, and the effects on the advocates.  He includes here extensive discussion of the Milgram experiments, which showed how ordinary people will carry out orders that inflict harm on others so long as the orders are given by someone they believe to be an authority who has the right to issue such orders.  I would say that Rose here well-documents how the belief in "authority" induces mental and moral illness.

In Part IV Rose responds to those who believe that we need to believe in "authority" and specifically "government" to maintain an orderly society.  He goes into some detail discussing what life would be like without the superstition, that is, without rulers. Contrary to common fear, life without rulers does not devolve into life without rules.  Very importantly, he discusses how a society can muster defense against invaders without a centralized government to plan and execute a defense.  He also discusses how to raise children so that they respect moral law without believing in authority.

Rose ends The Most Dangerous Superstition with the following:

I think everyone who values freedom, justice, compassion, cooperation, and peaceful coexistence should read The Most Dangerous Superstition.