Foods for Strength and Health

Choosing foods for strength and health is really pretty simple...

Natural whole foods that are delicious, highly nutritious, and low in toxins are best for both health and strength.  What are they?

Like many other modern people, I have spent much of my adult life confused about food.  We have been misled about food into dietary binary cons by two kinds of people: sincere but misguided people who themselves were confused because they lost their roots; and malicious people who were intent on inducing confusion for the sake of generating profits in the food, pharmaceutical and medical industries.

For example,  prior to industrialization, the basic European farmer's diet consisted of bread, porridge, noodles, lentils, peas, potatoes, seasonal fruits and vegetables, milk/yogurt/cheese, eggs, and occasionally a bit of meat.

Traditional Chinese medicine explains that we find humans tending to eat in this fashion because it complements human nature.  We know it is a human-natural way of eating because pre-industrial humans spontaneously adopted it without any badgering or coercion by social engineers or dietitians.

It is also the most efficient way to use land, producing more food from less land while making use of both arable and non-arable lands and waters.  By being plant-based, this dietary pattern minimizes the amount of arable land needed per person to meet caloric needs, and yet uses water ways and otherwise unusable lands to also produce animal products which meet critical human nutrient needs.

Chinese medicine has always maintained that people need plant and animal foods to thrive.  Humans can and do choose to eat differently from this pattern, but Chinese medicine predicts that individuals and cultures that choose to eat otherwise will tend to have poorer health, lower physical and mental creativity and productivity and shorter life expectancy than those that eat in harmony with this pattern.  In other words, neither individuals nor cultures really thrive when their diets markedly differ from this pattern.

Traditional Chinese civilization exemplifies the point.  Chinese people have been eating this way for about 4000 years, and Chinese culture has been continuously alive for at least 2500 years.  Chinese philosophy, science, and arts spread from China to occupy all of far east Asia, and now are spreading throughout the world.  The Chinese population  proper grew to 1 billion and maintained a high level of health during this whole time.  The Chinese diet produced Chinese people who produced and propagated advanced arts and sciences and a highly intelligent and developed culture and civilization for more than two millennia.

As I said, I have been a victim of the dietary confusion that reigns in popular culture.  Despite having studied Chinese culture, medicine and macrobiotics in my twenties, I was still seduced by slick illogic into veganism, paleo, carnivore, keto, Zone and other non-traditional diets.  I feel ashamed for having fallen for those pits.  However, I consider this shows how easy it is to take down someone who is not well-rooted in tradition.  Above all, the social engineers of modernity want to cut us off from and at our roots, because once we are rootless, they can lead us into their brave new communist world where we slaves eat Soylent Green, own nothing and are just cogs in a machine that keeps elite gangsters filthy rich.

Plants can't run from predators, so to protect their above-ground portions from being eaten they produce defensive chemicals. The above-ground portions of plants – the leaves and stems – are typically richer in bitter-tasting compounds.  The fruit and root portions typically have lower levels of these compounds, and high levels of sugar, starch, or fat, which have a sweet flavor. 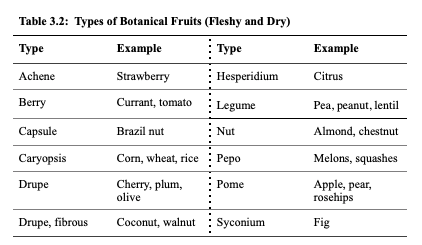 As shown, grains and legumes as well as many items commonly considered vegetables (squashes, tomatoes, cucumbers) are actually types of fruits.

Many plants have a highly successful reproductive strategy that involves producing delicious and highly nutritious seed-bearing fruits; these invite animals to consume the fruits and in the process distribute the seeds, often with a bit of fertilizing manure. If the fruits were toxic, animals would quickly learn to avoid the fruits and the plants' purpose would not be served.

Many people fall for the claim that grains and legumes are toxic to humans.  I'm ashamed to admit that I did.  As mentioned this claim is generally supported by slick but ultimately illogical arguments.  No civilization can be built on toxic foods.  The simple fact that literally billions of people sustain their lives on diets consisting largely of cooked grains and legumes clearly refutes the claim that these foods are toxic.

The arguments against grains and legumes consist of getting you to pay attention to minutiae –– the invisible alleged anti-nutrients in the grains –– to hypnotize your mind so that you don't see the fact right in front of you –– the billions of people living on these supposedly toxic foods.

The human digestive system is basically the same as that of other primates that specialize in eating fruits, known as frugivores.  Therefore it makes sense to emphasize fruits (including all the types listed in the table above), roots and tubers in our diets. 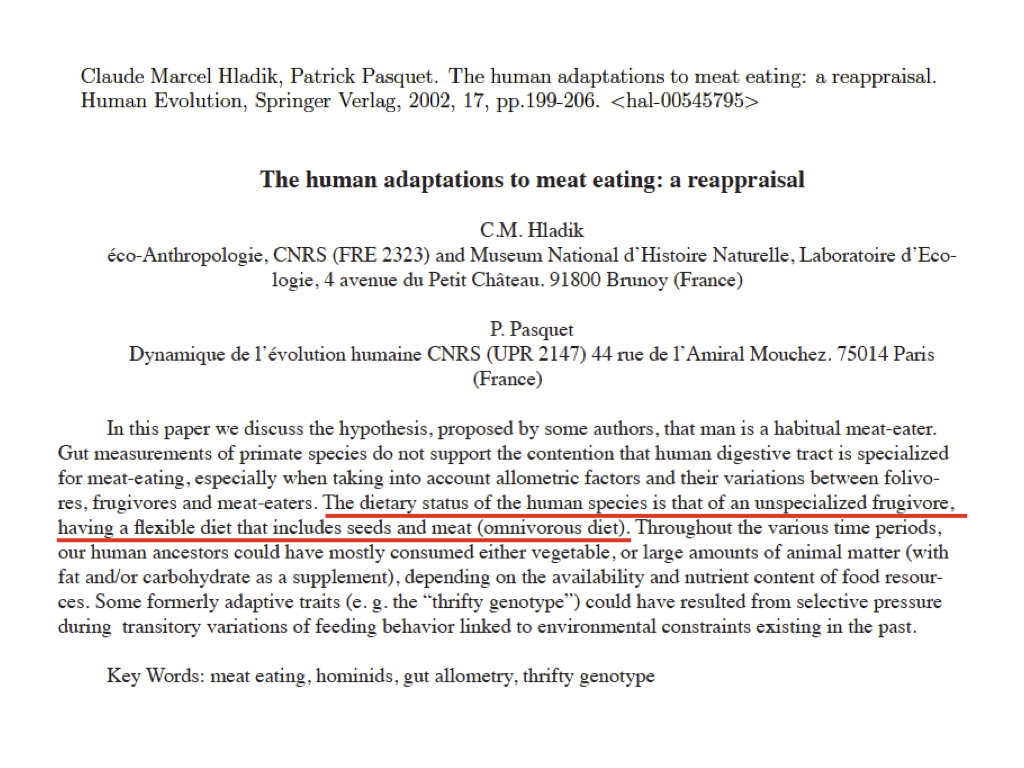 Unlike canines, cats and other non-human carnivores, all of which are relatively color blind, we have color vision.  This has the primary purpose  of enabling us to detect ripe fruits.

Unlike other carnivores and like other primates, we have a strong taste for the sweet flavor, which in Nature is provided by grains, fruits, honey and saps of trees. The only purpose of this sweet taste is to guide us to find and consume sweet foods.

Many underground portions of plants – roots and tubers – are also rich in sweet-tasting starches and sugars and low in bitter-tasting chemicals.

For example, our stomach acidity is actually greater than that of typical carnivores and most like that of animals that feed on carrion.  Our stomach pH is 1.5, similar to falcons (1.8), Swainson's hawks (1.6), ferrets (1.5), wandering albatross (1.5) and possums (1.5).  Our stomach is actually more acidic than that of some dogs (beagle, 4.5 pH) and the common cat (3.6 pH).   This suggests we are adapted to a regular intake of animal products that could contain pathogenic bacteria.

In addition we have a high capacity gall bladder, which stores bile for digestion of fats, and is not typically found in animals adapted to very low-fat plant based diets.  However, this doesn't mean we are optimally adapted to a diet providing most of its energy as meat or fat (such as the diet of a wolf). Non-human primates typically consume diets providing less than 5% of energy as fat, so a diet containing only 25% of energy as fat provides about 5 times as much fat as a typical primate diet.   In other words, a 25-35% fat diet is a high fat diet for a primate.

We now have good evidence that a diet high in total fat (i.e. greater than 25-35% fat) promotes obesity (by increasing dietary energy density), and a likely promoter of diabetes, cardiovascular disease, and other maladies.  We are neither apes nor canines, we are humans.  Our natural diet is neither as low in fat as that of a primate nor as high in fat as that of a wolf.

Good foods for strength and health

According to the principles of yoga and Ayurveda, the world's oldest medical system, foods can be divided into three basic types:

Sattvic foods support physical health and strength and spiritual development.  Rajasic foods are prone to overstimulate the body and mind causing restlessness and aggression so should be limited.  Tamasic foods promote disorder and disease of body and mind.

According to Ayurveda and yoga sciences, if you want to achieve not only physical health and strength but also moral and spiritual excellence, the best foods are those that we find delicious, easily digestible and highly nutritious, including:

A diet consisting of a broad selection of cereal grains, fruits, vegetables, and a moderate amount of milk products can meet all essential nutrient requirements.  In addition, it can be easily produced locally and even by a family on their own land.  It can give people freedom from diet-related diseases, freedom from the merchant system, and support personal spiritual evolution and liberation (moksha).

The optimum proportions will vary from person to person.  Each person needs to find his/her own sweet spot, which may even vary from time to time, depending on physiological needs and goals.