Training with elastic resistance bands produces strength gains similar to weights, according to a 2019 meta-analysis of the 8 high quality trial reports culled from a pool of 365 published articles that reported research involving resistance bands. 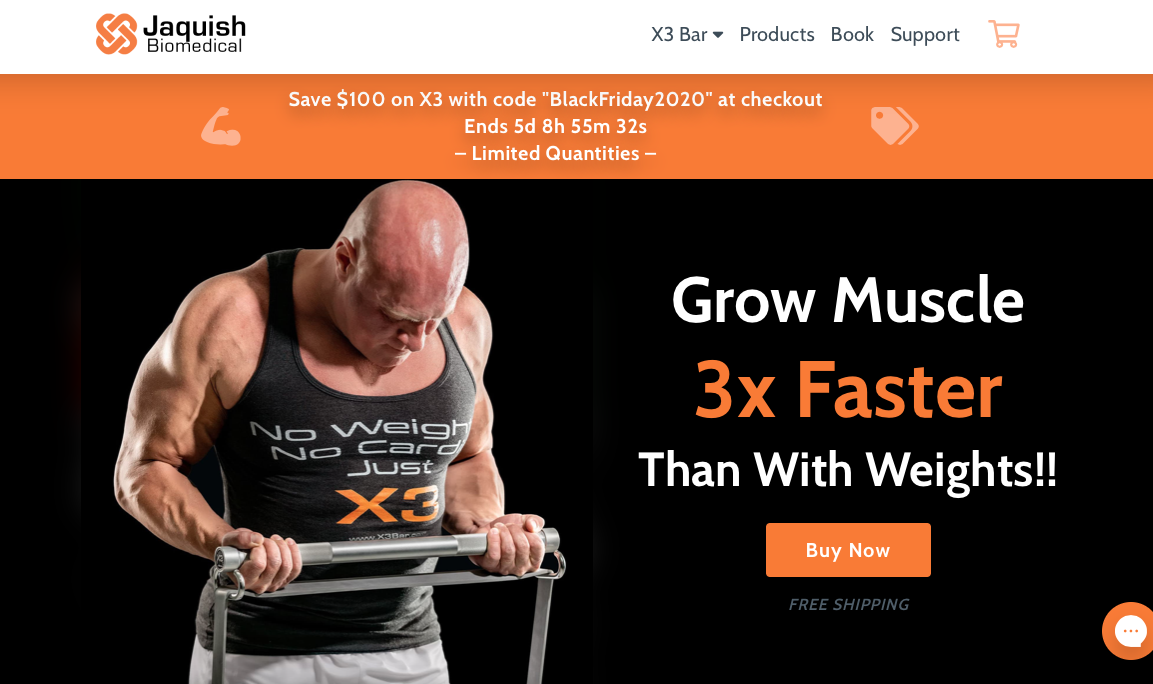 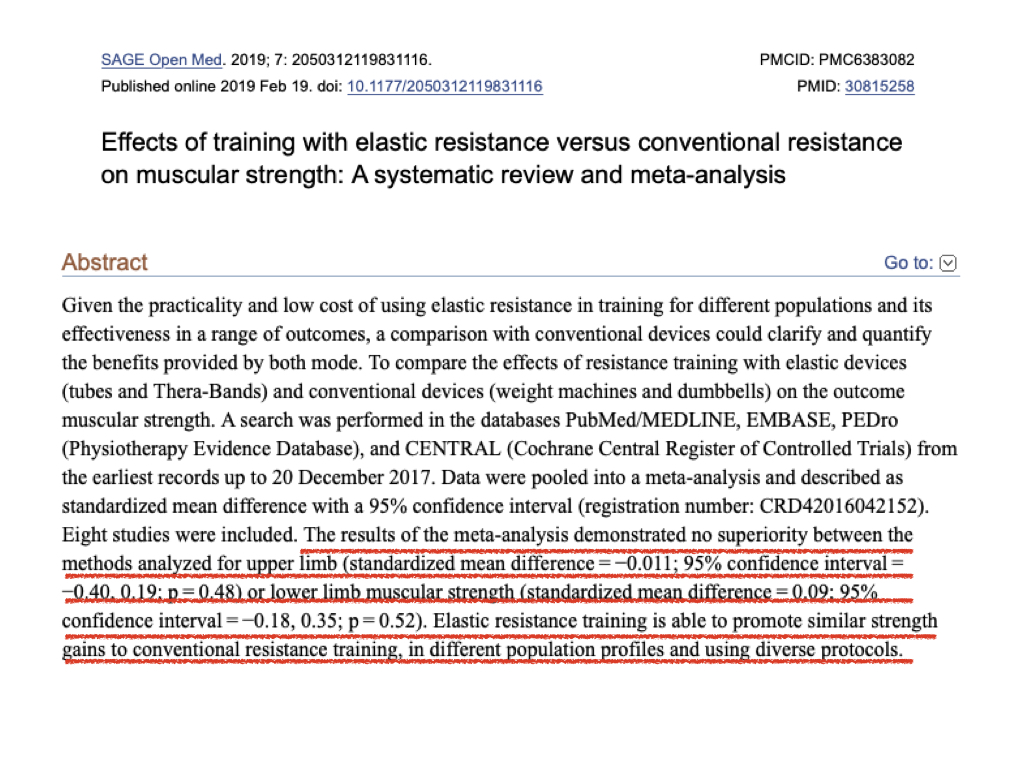 Lopes and colleagues analyzed data from 8 studies comparing outcomes of training with elastic resistance bands with those of training with conventional equipment (weights).  These studies included 224 subjects aged between 15 and 88 years, all of whom had pre-established habits of performing strength training (they were experienced trainees, not newbies).

All studies used weight machines for conventional resistance; one study used free weights.  Four studies used the Thera-Band as for elastic band resistance, and the other four used elastic tubes (like the Bodylastics bands I use and recommend).

Duration of the training studies ranged from 4 to 12 weeks.  Frequency of training ranged from 2 to 5 times weekly.

Methodological quality of the studies was moderate – 6.5 on the PEDro scale –, individual studies ranging from 5 to 8 (one scored 8, four scored 7, one scored 6 and two scored 5).

Meta-analysis of the outcomes for upper and lower limbs showed no superiority between training performed with elastic band resistance and training with weight machines and/or free weights on strength gain.

No superiority means neither tool produced superior outcomes.  The authors represented the outcomes on forest plots: 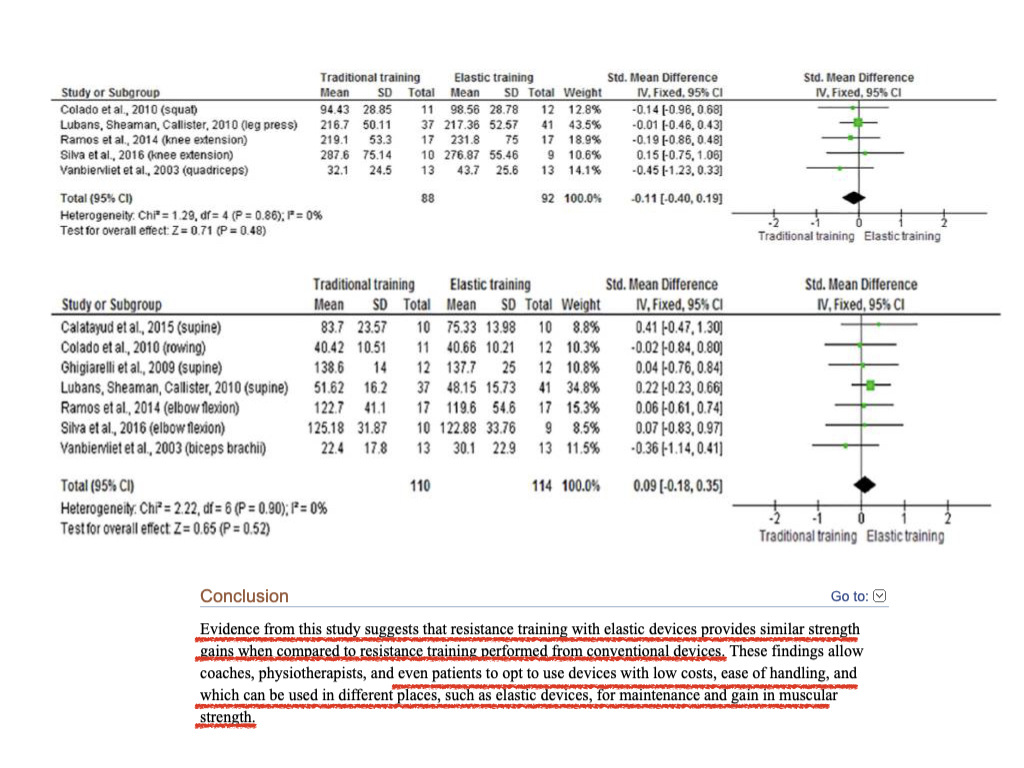 As shown in the forest plots above, training with elastic resistance bands produces strength gains similar to weights.  There is no statistically meaningful difference in outcomes.  Bands were neither inferior nor superior to weights.

Lopes and colleagues performed a secondary analysis of the data to group health individuals and those with chronic diseases.  Again they found no statistically significant differences in outcomes between training with elastic resistance bands and conventional weights or weight machines.

Training with elastic resistance bands produces strength gains similar to weights whether you are 18 or 88, male or female, or an athlete or patient with chronic disease.

This really should not be surprising.  Muscles do not know or care what is the source of the resistance against which they are made to exert force.  Resistance is simply a tool to elicit a high degree of muscular tension for a sufficient period of time to stimulate increases in strength and muscle mass.  So long as you train with adequate intensity, develop adequate levels of muscle tension, sustain that tension for a sufficient time period during each set, and repeat training sessions with adequate frequency, the source of resistance does not matter.

You can push or pull your own bodyweight, sand bags, logs, iron bars and plates, hydraulic resistance, flywheel resistance, any type of resistance that suits your fancy, or even apply self-resistance (use one muscle to resist another).  That said, training with bodyweight calisthenics and resistance bands combined offers distinct advantages over other methods.

Muscles do not know or care what is the source of the resistance against which they are made to exert force.  Resistance is simply a tool to elicit a high degree of muscular tension for a sufficient period of time to stimulate increases in strength and muscle mass.  The source of resistance does not matter.

Limitations of This Analysis

One important limitation of this report is that all the data included in the meta-analysis came from studies comparing two types of resistance, weights and variable elastic bands, both of which provide uneven loading of muscles through the exercise range of motion, due to the interaction of leverage and the properties of the resistance source (weights or bands).

In comparison, combining weights and resistance bands improved the resistance curve so that it more closely matched the strength curve of each exercise.  This means that simultaneously combining the two forms of resistance produces more even loading and therefore longer time under high tension during every repetition and set.

With a better resistance curve, one set can equal several sets in actual time under heavy load and high muscular tension.  For example, when performing bodyweight split squats, the muscles work hard in the bottom half of the squat, but the top third of the ROM is quite easy due to leverage.  This means that the muscles are only working hard for about one-third to one-half of the ROM and time spent doing full range repetitions the conventional fashion.  Now add some bands and the upper ROM becomes far more difficult due to the variable resistance of the bands.  Now your time under heavy load per repetition has doubled or tripled.   This makes one set similar to three sets without the bands.

This might elicit greater strength and hypertrophy gains per set performed than using either mode of resistance alone.  This remains a hypothesis awaiting confirmation or rejection by well-designed studies.

Free Yourself From Weights and Gyms

As Lopes and colleagues conclude, "These findings allow coaches, physiotherapist, and even patients to opt to use devices with low costs, ease of handling, and which can be used in different places, such as elastic devices, for maintenance and gain in muscular strength."

Extraordinary claims require extraordinary evidence.  Although we presently have no such evidence that training with elastic bands will 'grow muscle 3x faster' as claimed by Jaquish Biomedicals in their marketing for the X3 bar, and the X3 is more expensive than Bodylastics bands, I like, use and recommend it for overhead presses, ATG split squats, and front squats.  Although I don't think it is essential equipment for a home gym, its a nice piece of equipment to have if you want the feel of a barbell for the stated exercises.