Is Salt An Essential Nutrient?

Many people have been convinced that table salt – sodium chloride – is essential in the diet.

Is granular sodium chloride essential for health?  Would we suffer deficiency diseases if we didn't add it to food?

Some people have written books to convince people to consume more of this non-organic food additive and preservative.  James DiNicolantonio, for example: 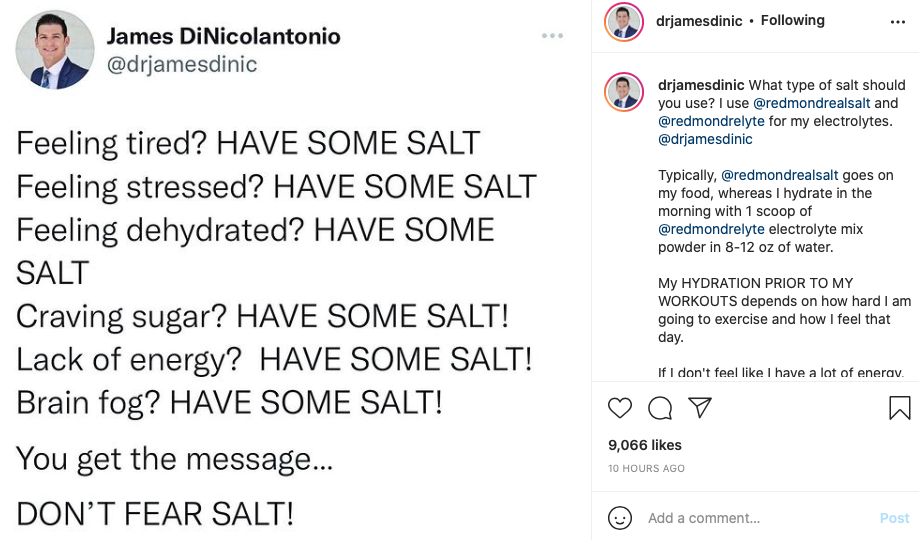 But do you really need table or cooking salt in your diet?

No.  There is no dietary requirement for adding isolated sodium chloride salt to your food.

No Salt Required For Sodium

Salt consists of sodium and chloride.  The Food and Nutrition Board of the National Academies of Science has this to say about sodium requirements: 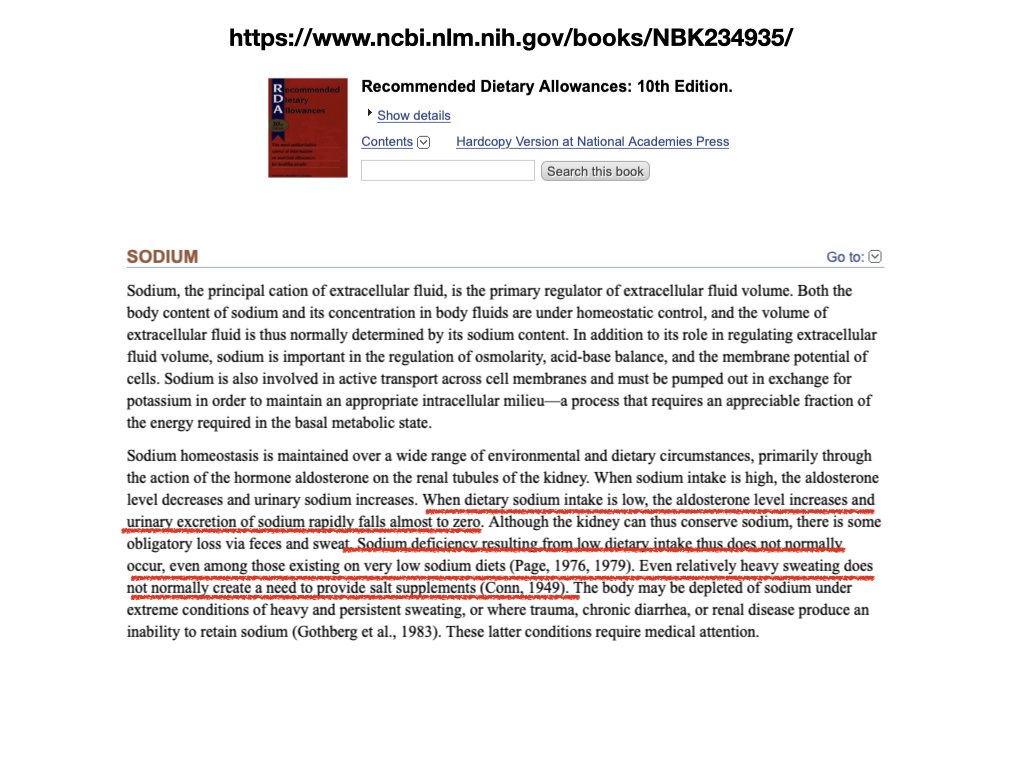 Sodium deficiency resulting from low dietary intake does not normally occur, even among people on very low sodium diets.  Moreover, they don't even identify a sodium deficiency syndrome on which to base a requirement for sodium: 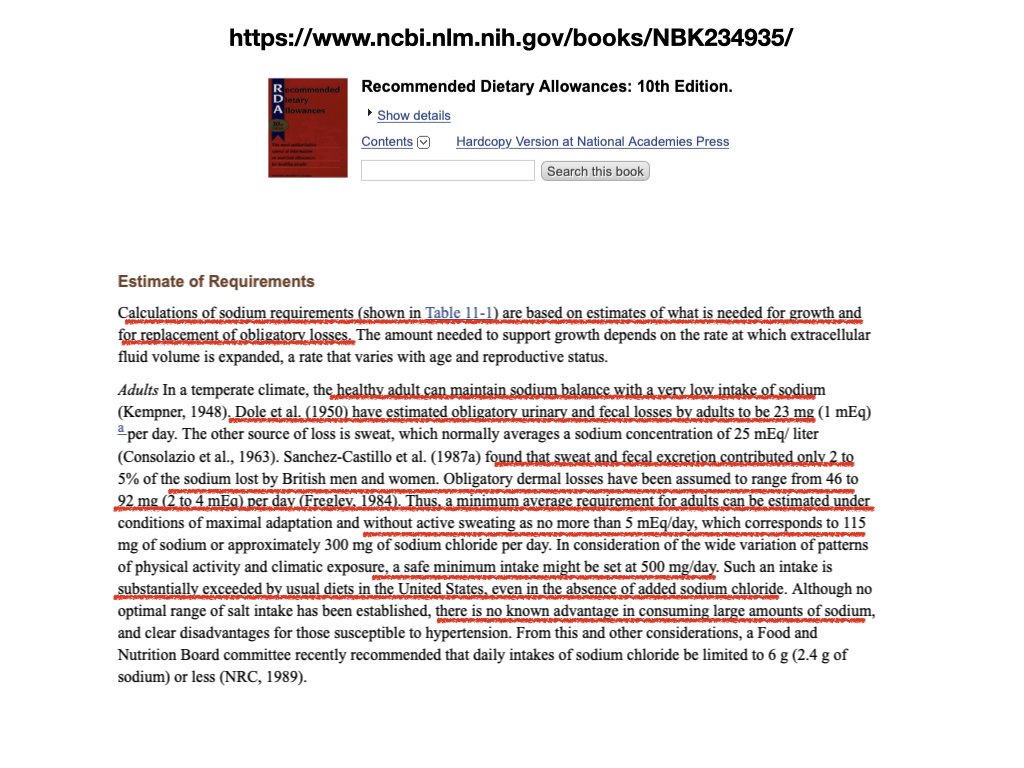 Calculations of sodium salt "requirements" are based on "estimates" of what is needed for growth and replacement of unavoidable losses.  Adults are not growing, and they already admitted no evidence of sodium deficiency related to diet.

Notably they never cite any evidence for a true sodium requirement.  Instead, they talk about "sodium balance" by which they mean the amount of sodium intake required to replace what is lost in urine, sweat and feces.  In their words:

"In a temperate climate, the healthy adult can maintain sodium balance with a very low intake of sodium."

Losses by these routes will always be proportional to intake:  more in means more out, less in means less out.  They have no proof of any absolute sodium requirement. 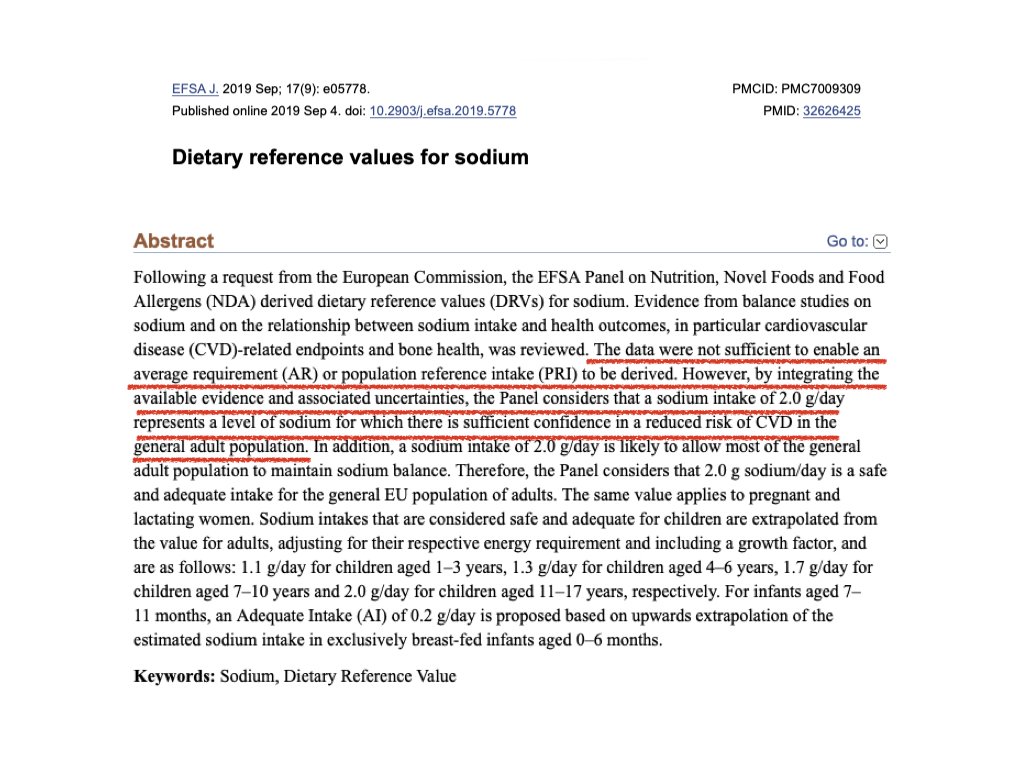 No Salt Required For Chloride

Since the medical and nutrition professions often refer to salt as a primary source of dietary sodium, most people do not know that the bulk (about 60%) of the weight of salt consists of chloride.  The Food and Nutrition Board reports that "Under normal circumstances, dietary deficiency of chloride does not occur." 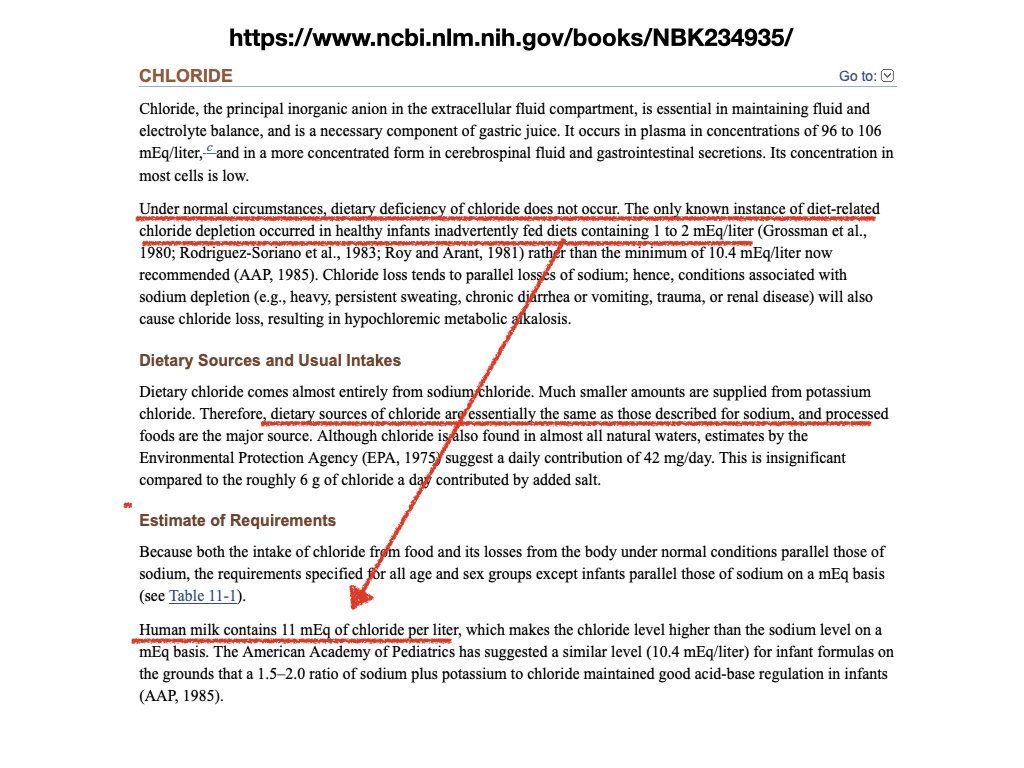 Here as "evidence" of dietary sodium and chloride deficiency in infants they cite for example this study of infants fed an artificial formula Neo-Mull-Soy: 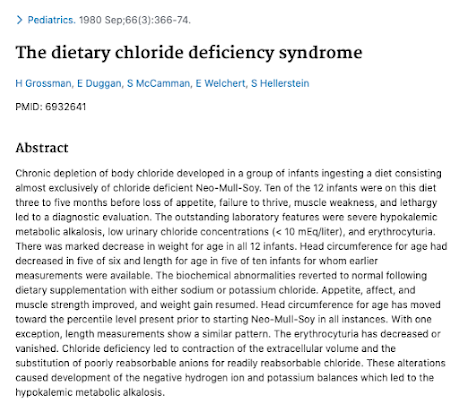 This is suspect simply because Neo-Mull-Soy is an industrial product substituted for God-given human mother's milk.  Note that they say that the outstanding laboratory features were: 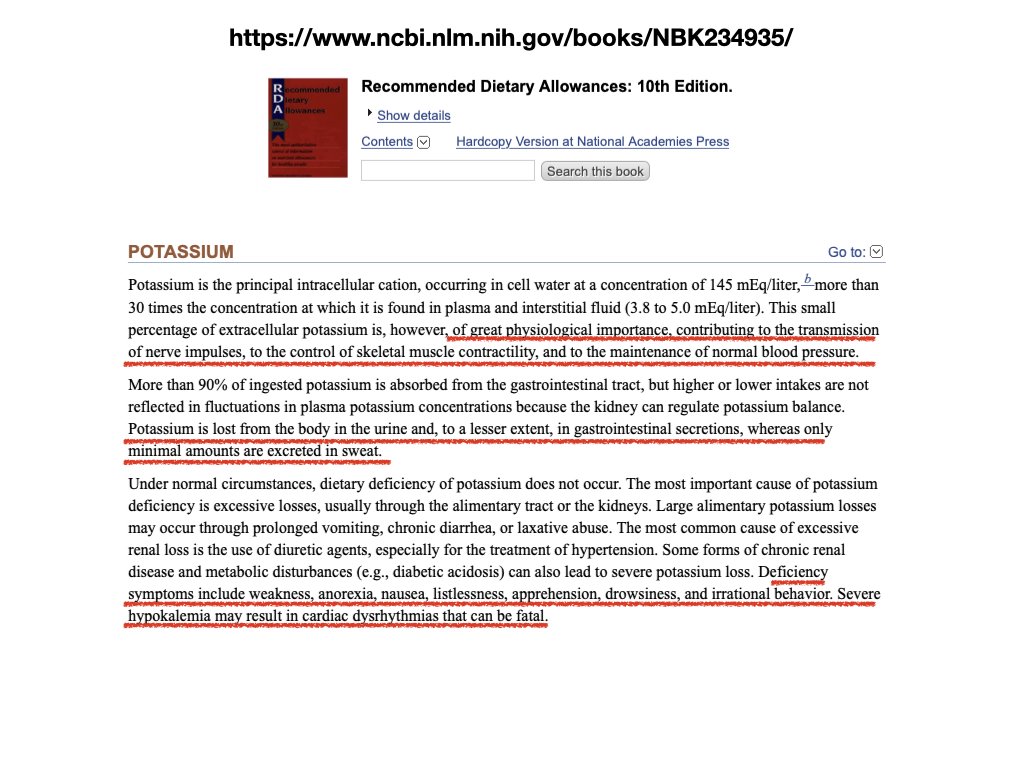 The fact that this condition resolved by supplementing either sodium chloride or potassium chloride does not prove that the condition was caused by chloride deficiency.

First, since the authors did not isolate chloride supplementation, they did not prove that the condition was caused by chloride deficiency.

Since sodium and potassium ions are both alkali elements with similar +1 electrical charges, sodium can substitute for potassium to some extent.

They noted very low potassium in the blood, and symptoms consistent with potassium deficiency, and provided supplements of either sodium or potassium that could provide some relief from such deficiency.  They did not prove a chloride deficiency syndrome.

The EFSA has no strong evidence for a chloride requirement either: 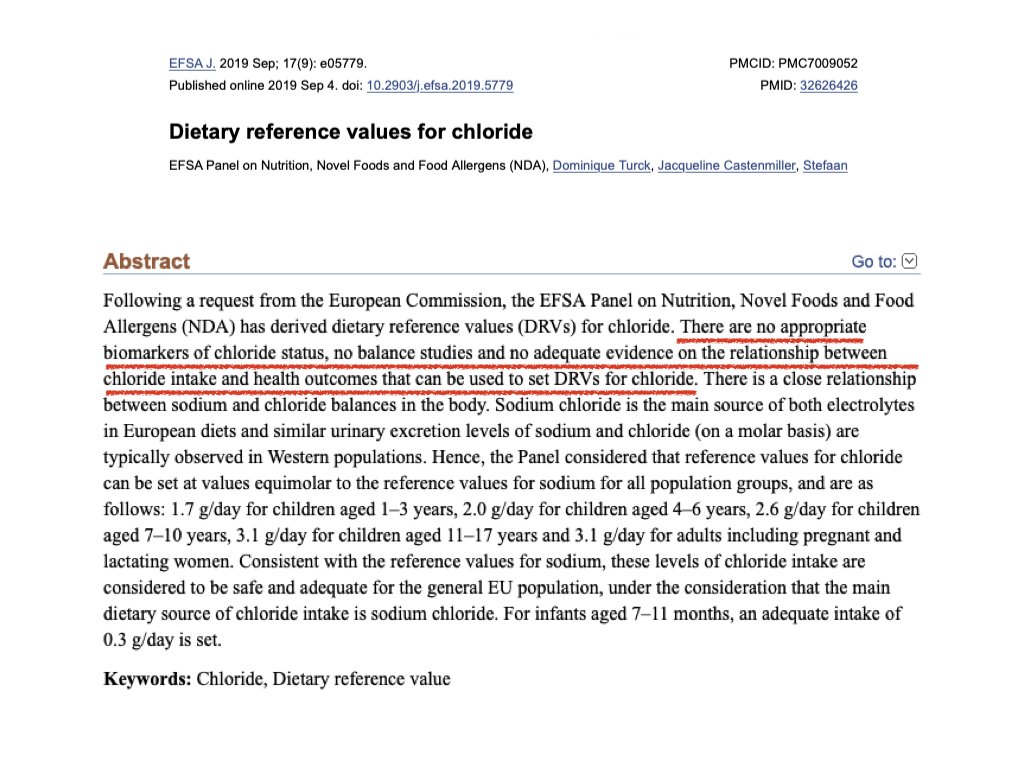 To emphasize:  There are no appropriate biomarkers of chloride status, no balance studies and most importantly no adequate evidence on the relationship between chloride intake and health outcomes to determine any "requirement" for chloride.  Since there is no evidence for a dietary requirement for chloride, the EFSA defaults to suggesting "safe and adequate" intakes of chloride based on their sodium "reference values" which refer primarily to avoiding harm from eating salt.

Its really not clear how much if any chloride we need in our diets.  However, it is clear we do not need to add salt to our diets because there has never been reported a case of sodium or chloride deficiency due to avoidance of the food additive salt.

Indeed there are whole nations of people who live their entire lives without ever adding sodium chloride salt to their foods.  These populations show no evidence of sodium or chloride deficiency (if such can ever exist), while showing a high immunity to diseases of civilization.  The Yanomami are a good example.

There is no dietary requirement for salt apart from food.  The Yanomami tribe of South America never uses salt on or in food.  They show no signs of either sodium or chloride deficiency, and have a high immunity to diseases of civilization. 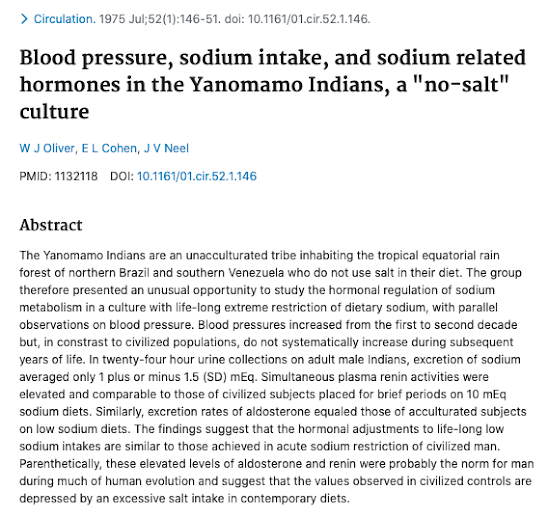 No Need To Add Salt to Food

So far, we know potassium is essential; and have no strong evidence that either sodium or chloride is essential, but we know that people on salt-free diets have no signs of either sodium or chloride deficiency. Instead, they (exemplified by the Yanomami) have life-long low blood pressure and a high immunity to cardiovascular and other degenerative diseases common among people eating salted diets.

Here are the sodium and potassium contents of commonly consumed animal products: 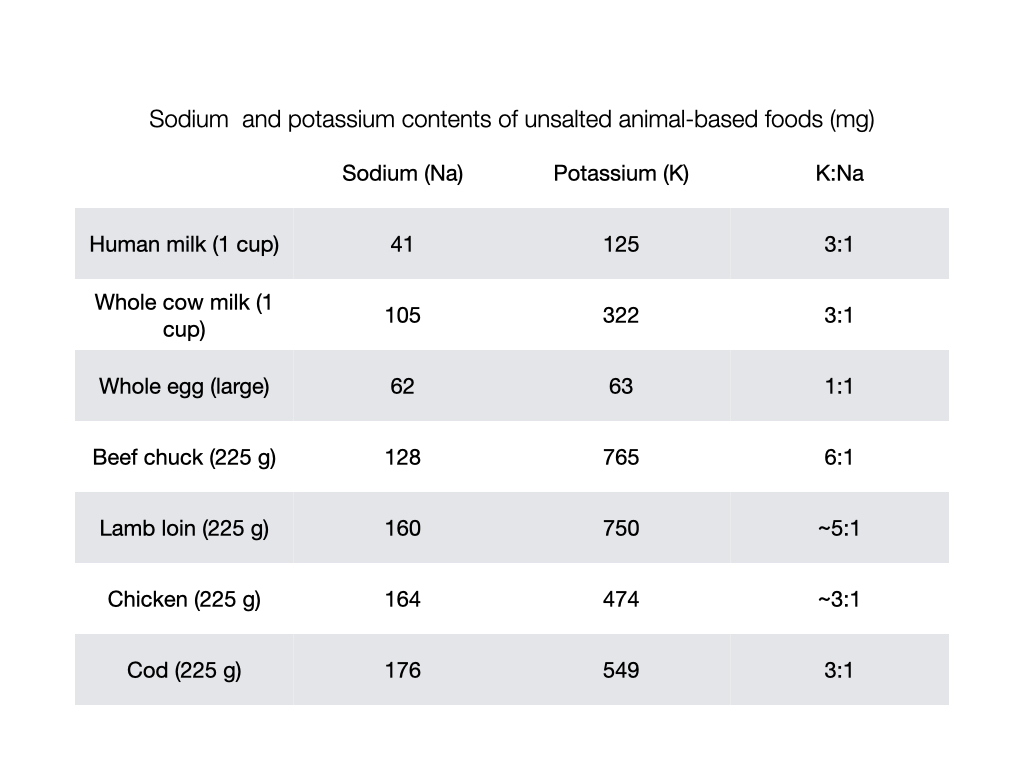 Note that human mothers' milk provides 3 times as much potassium as sodium.  This ratio or greater is found in cow milk, beef, lamb, chicken and cod.  We can safely assume that this is the baseline optimal dietary K:Na ratio for humans of all ages because it is the ratio consumed by infants as well as any hypercarnivore.  We should get at least 3 times as much potassium as sodium.  The foods have the optimal ratio as they are; adding salt to them will only reduce the ratio.

Here's an hypothetical 2000 kcal menu with the sodium and potassium contents: 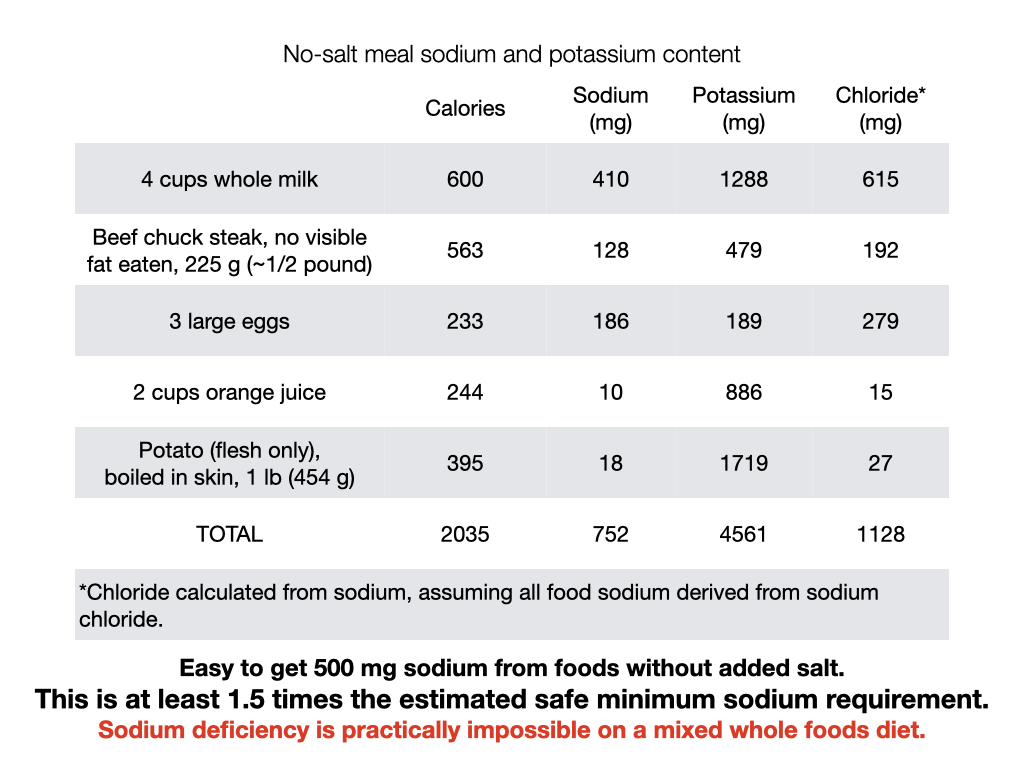 You can see that without adding any salt whatsoever, the sodium content far exceeds the Food and Nutrition Board's estimated true minimum of 115 mg required to prevent negative sodium balance, and exceeds by 50% the guesstimated 500 mg that would cover all common circumstances (as discussed above).  In other words, it already has excess sodium; adding salt only increases the excess.  Meanwhile the potassium is safely above the estimated minimum requirement of 1600-2000 mg.

Note that the menu presented provides 69% of energy from animal products (a hypercarnivore ratio) and the potassium:sodium ratio of the menu is 6:1.  We can safely assume that the human body is designed to obtain at least 3 times as much potassium as sodium in the daily diet, as found in human milk, and that adults are designed for diets containing more than 5 times as much potassium as sodium, as this is what an unsalted mixed animal-based diet of whole foods will supply. 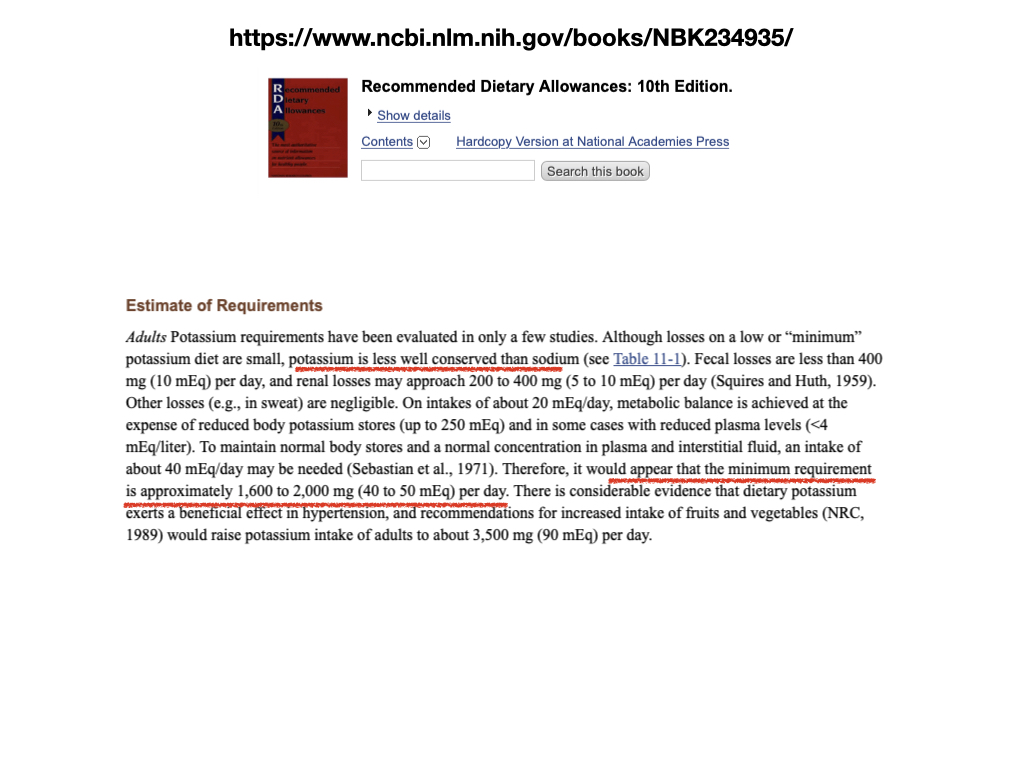 However, as stated directly above, potassium is less well conserved that sodium.  You need 1,600-2,000 mg/d  just to avoid frank deficiency.  A greater intake is required to keep blood pressure optimal. 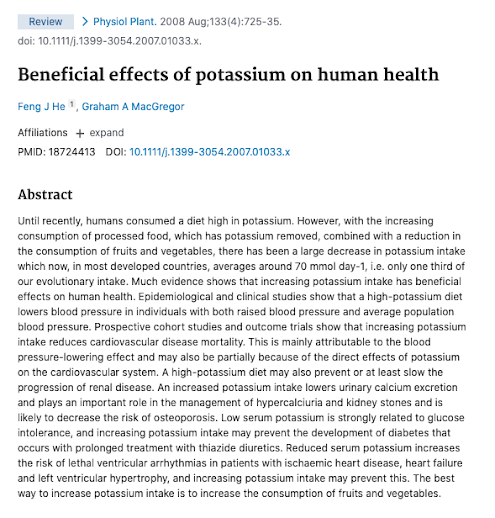