Not the best hamstring developer

Nordic Hamstring Curls (a.k.a. Nordic Curls) have become quite popular, with some people promoting them as the best of all hamstring exercises.  According to some fitness influencers, mastering the Nordic curls will contribute to rehabilitating your knees and making them more resistant to injuries, while providing hamstring development unattainable by any other means.

I have tried Nordic curls off and on for several years now.  When I followed the ATG Knee Ability program during 2021, I tried doing them regularly, but did not like them.

I would try them for a period, then give them up, never finding them comfortable.  After experimenting with Nordic curls, thinking about the physics/mechanics of the exercise, and reading about knee injuries related to kneeling and reports of research comparing them to other bodyweight hamstring exercises, I have concluded that Nordic curls are a dangerous and inferior hamstring exercise, for the following reasons.

To understand why Nordic curls increase knee injury risk, let’s analyze the mechanical forces on your knees when you perform the Nordic curl.

When you kneel as needed to perform the Nordic curl, you put about 89% of your bodyweight directly on your knees , and this smashes your patellar tendon between your femur (thigh bone) and the surface on which you kneel.  Then you extend and flex your knee while the patellar tendon is being crushed by the load.  As you lean out forward to perform the eccentric action, the force smashing the knee into the platform dramatically increases as your bodyweight is multiplied by a lengthening lever.

No other hamstring exercise is performed while the load is compressing the patellar tendon and its bursae, which are small sacs of fluid with thin linings that reduce friction between tissues. 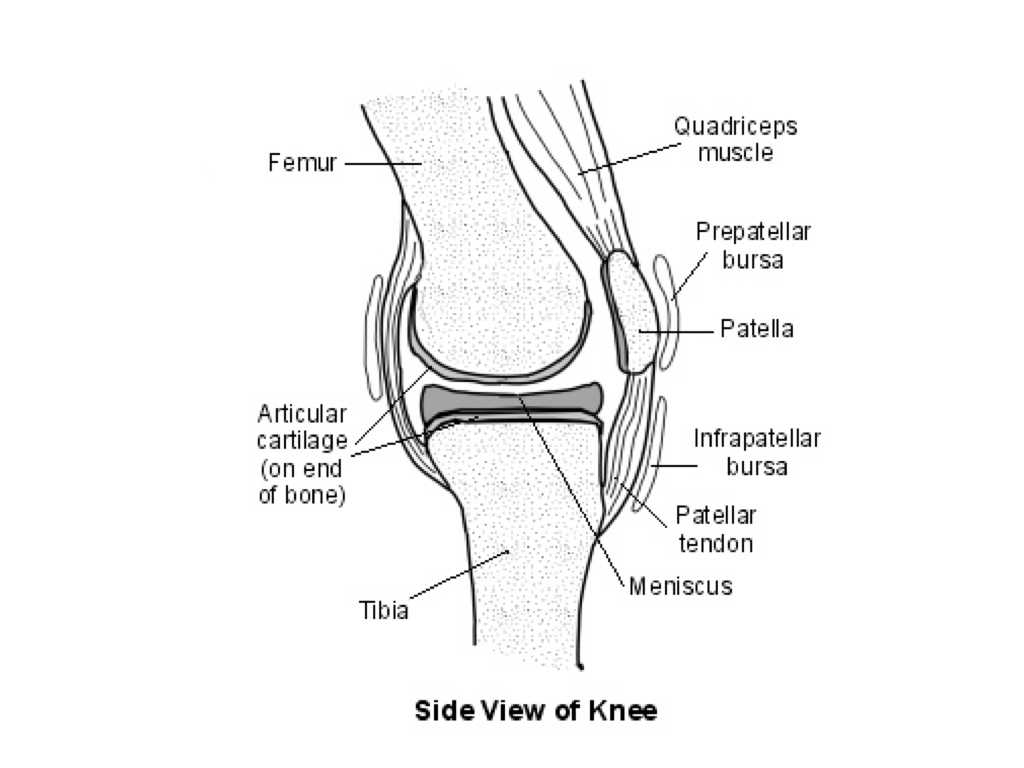 Extensive kneeling on your patellar tendon is a proven cause of knee injury.  Prepatellar bursitis––a.k.a. housemaid’s knee––commonly occurs among people who spend long periods of time kneeling.  Bursitis means inflammation within a bursa.  The knee includes four bursae, of which those between the  skin and the kneecap are most commonly affected.  Housemaid’s knee is the name given to inflammation of these prepatellar bursa.

Carpet layers kneel to perform their work and the CDC reports that carpet layers frequently report bursitis of the knee, fluid buildup requiring knee aspiration, and a variety of symptoms that are caused by frequent kneeling on hard surfaces.  Although carpet layers make up less than 0.06% of the U.S. workforce, they file 6.2% of all workers’ compensation claims for traumatic knee injury, a rate that is 108 times that expected in the total workforce and the highest rate of any occupation reporting such claims.  Knee injuries also occur at a high rate among tilesetters (53 times that expected) and floorlayers (46 times than expected), other occupations requiring kneeling on hard floors.

People who advocate the Nordic curl will likely point out that individuals performing the exercise for hamstring development do not spend long periods of time kneeling on hard surfaces, but use a cushion under the knees, unlike carpet layers, tilesetters, floorlayers, and housemaids.

Although this is true, these occupations do not involve leveraging your bodyweight over the knee, forcing the patellar tendon and its bursae to operate while being crushed by forces equivalent to multiples of your bodyweight.  In short, although use of the Nordic curl for hamstring training does not put pressure on the knees for extended periods of time, it does subject the patellar tendon to much higher forces than simple kneeling over short periods of time.  Soft tissue injury can occur when the tissue is subjected to low forces over long periods of time (e.g. heel blisters after a long walk in ill-fitting shoes), or when it is subjected to very high forces over a short period of time (e.g. sprained ankle due to sudden torque).

Certainly Nordic curls are more likely to cause knee injury than hamstring exercises that do not involve loading 89% of your body weight (and multiples thereof) directly onto the patellar tendon.  Does the Nordic curl provide such uniquely amazing training effect for the hamstrings that the risk is outweighed by the potential benefits?  No.

There is no doubt that the Nordic curl puts tremendous pressure on the knee, and poses a greater risk of knee injury than hamstring exercises that don't require kneeling while flexing and extending the knee.  This risk must be weighed against the potential benefit of performing the Nordic curl. 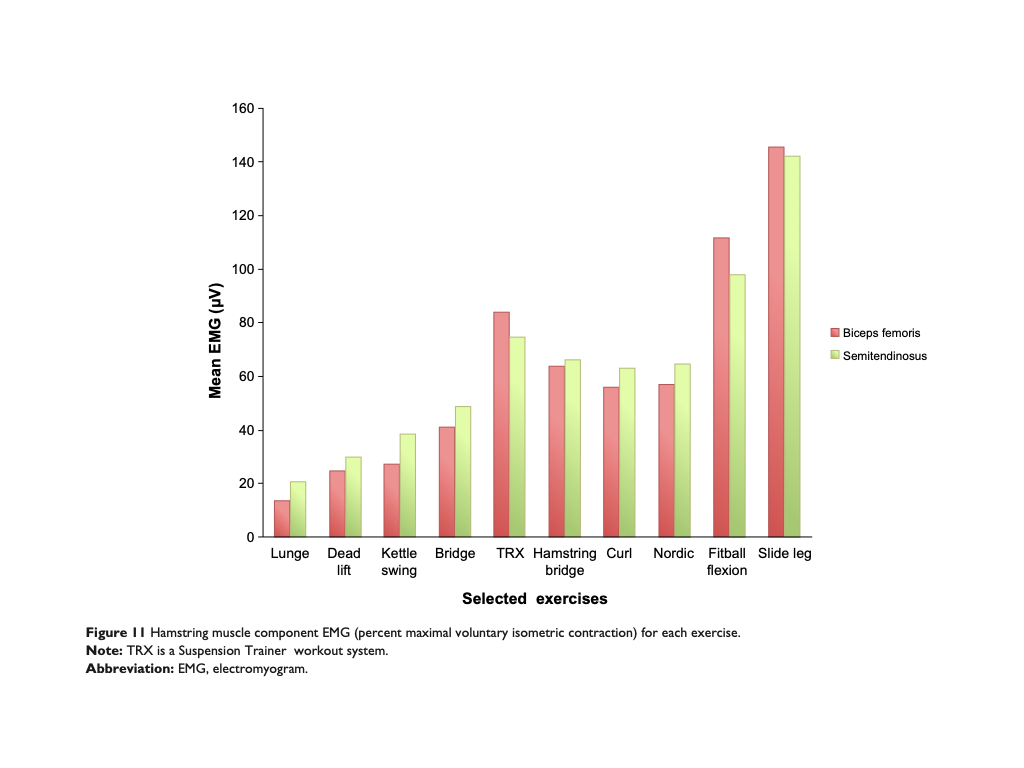 I am not going to discuss the Fitball flexion exercise any further because, as illustrated by this photo, it involves only a very small range of loaded motion (when the heel hits the ball) with virtually no loaded eccentric action, as it consists simply of squeezing a stability ball between the legs and the thighs with a hamstring contraction. 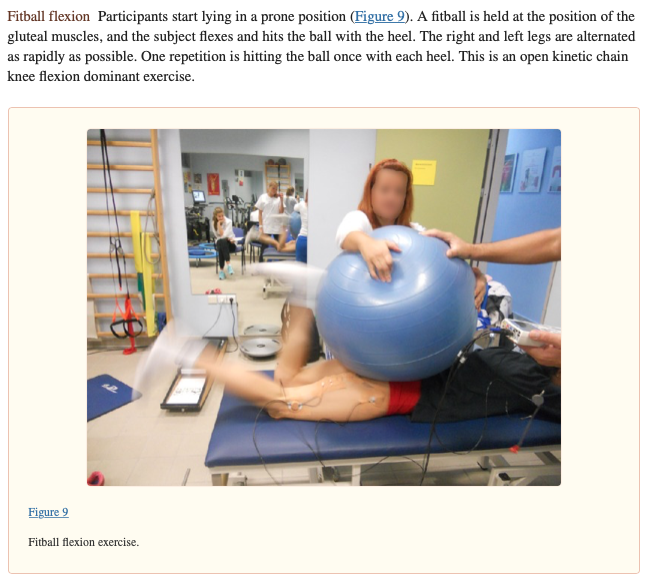 Although this can produce a strong hamstring contraction–– Tsaklis and colleagues found 100-120% of MVC––the absence of eccentric loading and resistance over the full range of motion makes this exercise inferior to the others.

In this study by Tsaklis and colleagues, the standing leg curl with band resistance was performed with a light resistance band and elicited a 60% MVC. 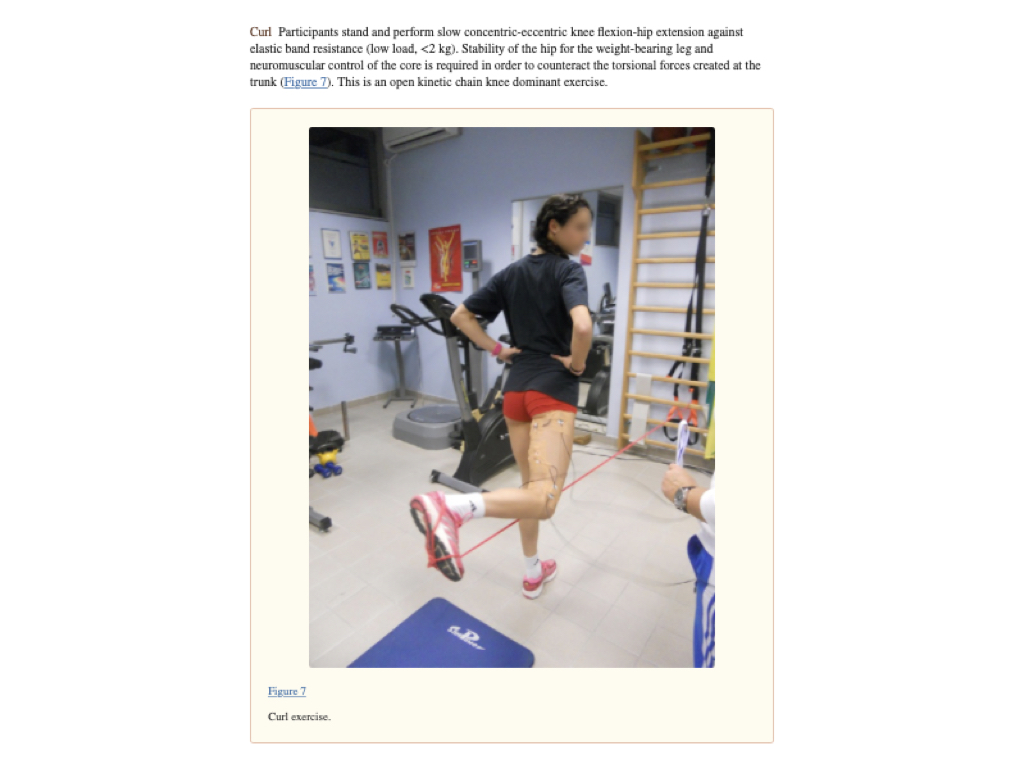 Tsaklis and colleagues noted that other studies have found that the leg curl performed with a load of 6RM produces a higher peak normalized EMG (81%).  In other words, they admit that if they had used a heavier resistance band for the leg curl they probably would have elicited a greater hamstring contraction than they found elicited by the Nordic curl.   In this older video I demonstrated performance of this exercise with torso stabilization and a higher (~8RM) load.

Properly set up, the standing band leg curl performed in this fashion engages both the hip extension and knee flexion functions of the hamstrings, and has the distinct advantage of training the hamstrings in the body position and range of motion they are used in running.

Tsaklis and colleagues found that the suspension alternating leg curl produced ~80% of maximal voluntary contraction of the hamstrings. 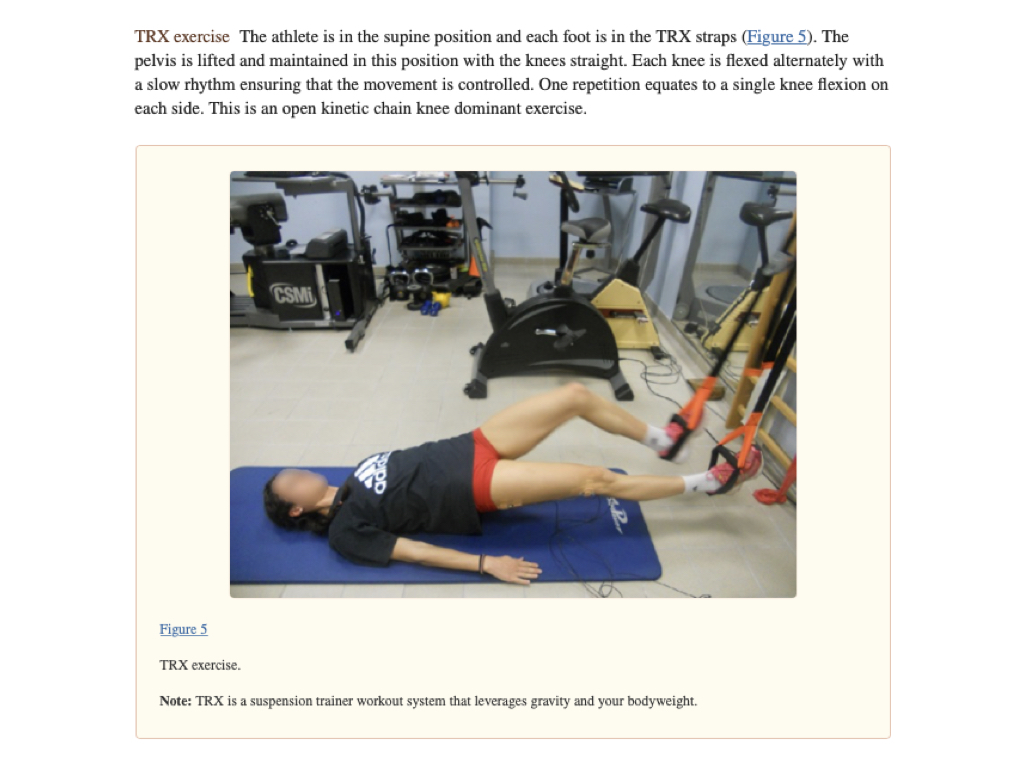 In my experience performing the suspension leg curl with alternating legs is much less difficult than performing the leg flexion bilaterally, evidenced by the fact that I can perform a bilateral set to momentary muscular failure, then immediately perform several repetitions unilaterally.

Although the supine posture is not the same as during running, the load on the hamstrings engages both the hip extension and knee flexion functions of the hamstrings, just like the standing band leg curl.  As with the standing resistance band leg curl, the intensity of muscular activation can be increased by incrementally increasing the load; I will discuss the various methods later. 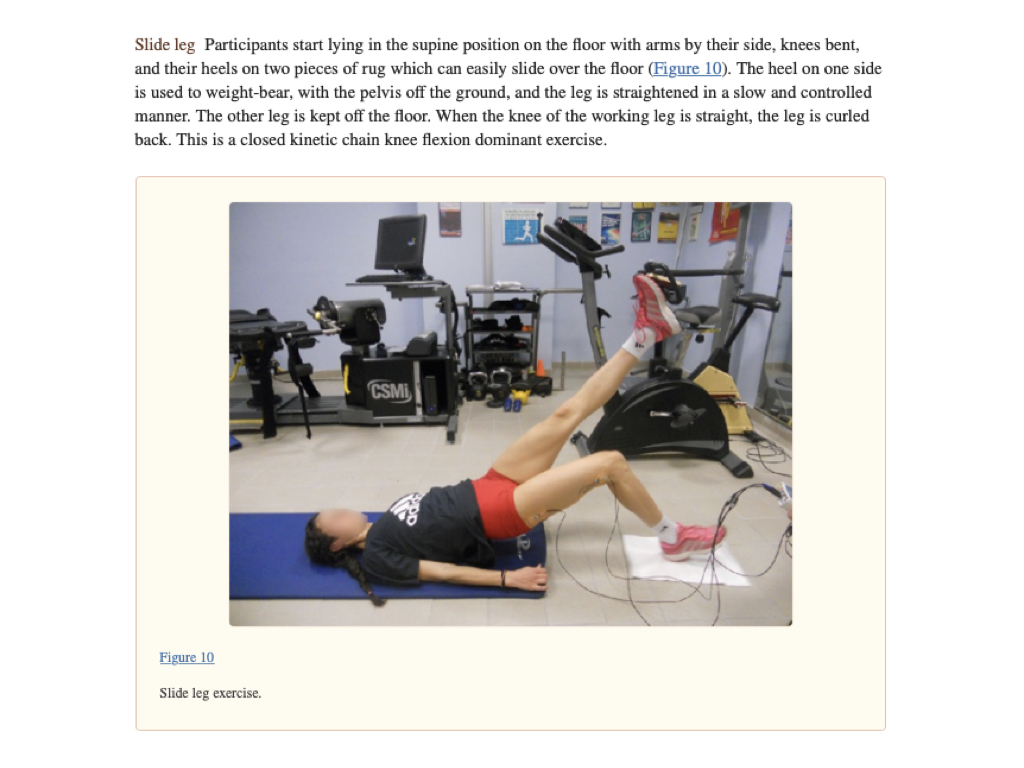 The sliding leg curl floor exercise lacks this force.  Also, when doing the sliding leg curl, the friction between foot and floor provides resistance to leg flexion as one closes the knee (concentric action), but when you reverse the motion, unless the floor is very slick, the friction is also resisting extension of the leg, so as you open the knee the hamstrings are not as well loaded as in the suspension leg curl.

In any case, Tsaklis and colleagues found that there is no special muscle activation benefit to performing Nordic curls.  Several exercises can provide equal or greater hamstring activation without subjecting the knees/ patellar tendons to compression under bodyweight.

This research indicates that by performing either the suspension leg curl or the standing resistance band leg curl with flexed hips we may produce superior hypertrophy and equal or superior injury-prevention, without subjecting our knees to the potentially injurious forces discussed above.

The standing resistance band leg curl performance can also be adjusted to work the hamstrings while they are lengthened by setting up a bench to provide support so that you can bend at the hips (half pike position) as shown below.

In summary, the Nordic curl does not provide any unique benefits that would justify subjecting your knees to the potentially injurious forces discussed above. The suspension leg curl and standing resistance band leg curl are just as effective and far safer to perform.

Nordic curls have a resistance curve inferior to that of suspension, slide or band leg curls.

During Nordic curls, in the initial position, when the leg is flexed (knee closed), the load (provided by your body) is borne by your femur and the patellar tendon, with very little work required by the hamstrings.

When you perform the eccentric of the Nordic Curl, the load on the hamstrings dramatically increases within the first 15-20º of movement, to the point that most people can’t perform a full eccentric without assistance from the upper body or bands.

In summary, during Nordic curls, the hamstrings are underloaded when they are most fully contracted and overloaded when extended and most vulnerable to injury.

The suspension leg curl has the advantage of working the entire posterior chain, including the buttocks and spinal extensors all the way up to the neck, because these are all activated to maintain the full-lay bridge position required to perform the exercise.

Nordic Curls Are Not Easily Scaled

The other major problem with the Nordic curl is that it is difficult to scale (reduce or increase) the difficulty of the exercise in measurable small increments.

You can scale the Nordic curl by providing assistance with the upper body or bands, reducing or increasing range of motion, changing the angle of the board you use to do the exercise, or other means, but except for using a series of bands of incremental resistance, none of these methods is exactly measurable and most involve relatively large increments of difficulty.  Moreover, none change the fact that you are grinding your knees into the mat with every repetition.

To attach increasing plate loads to your waist, I recommend using the Brute Belt set up I demonstrated in this video (leg curls demonstrated at 11:18):

Since we have good evidence that we can realize equal or superior strength, hypertrophy and injury-prevention outcomes from hamstring exercises that do not involve subjecting the patellar tendon to forces that can cause bursitis or other knee injury, I see no rational case for using the Nordic leg curl for hamstring training.  You can use resistance band leg curls, suspension leg curls, or slide leg curl floor exercise to get equal or greater hamstring training effect without increasing the risk of knee injury by opening and closing the knee while it is compressed under the load.