Can you build strength whilst training only three seconds daily?  Yes, according to a new study published in the Scandinavian Journal of Medicine and Science in Sports.

However, while this study did confirm that you can gain strength with an extremely small training time investment, it also reported no muscle gains from such limited training.

In their report on their experimental study of strength training only three seconds daily, Sato and colleagues note that a classic 1953 study by Hettinger and Müller showed that young men could increase isometric maximal voluntary contraction (MVC) strength by about 15% in several weeks by performing a 6-second isometric action at two-thirds of MVC every day.1  In 1958 Rarick and Larsen also reported a 14% increase in isometric MVC strength of the wrist flexors after performing a single 6-second isometric action at two-thirds of MVC daily for 4 weeks.2

Sato and colleagues decided to examine the training effects of a single 3-second long MVC per day using either concentric, eccentric, or isometric action.

The subjects in the concentric, eccentric and isometric groups trained 5 days per week for 4 weeks, using only one exercise: arm flexion (aka bicep curls).  The total contraction time was only three seconds daily, 15 seconds per week and 60 seconds for the whole month.

This is very brief training, but was for only one muscle group, the arm flexors (biceps and brachialis).  More time would be needed to train the entire body, but not much more.  If one used compound exercises it would be possible to cover the whole body in just 3-4 exercises each day, which would require only 9-12 seconds.  For example, chin ups, dips (or one-arm push ups), and single-leg squats, each performed for one 3-second eccentric.  You could alternate the single-leg squats with Nordic curls for the posterior chain from day to day, or add the Nordics to the workout for a total time investment of about 15 seconds exercise.  Including generous time for set up we are talking maybe 3-5 minutes of exercise daily.

Although very brief, this was also high frequency training, 5 out of 7 days in the week.  The subjects rested only 24 hours between training sessions during the week.

First, all participants in the training groups completed all 20 training sessions, training only three seconds daily.

Second, no muscle soreness was detected before each training session in any of the participants, and progress was continuous, indicating that the subjects recovered from each session within 24 hours.

This may call into question the idea that one must allow at least 48 hours between sessions to recover, if you use a low-fatigue method of training.  This protocol involved high muscle tension with low muscle fatigue since the maximal muscle tension was maintained for only three seconds daily.

Fifth, none of the groups training only three seconds daily produced any measurable change in biceps or brachialis muscle thickness.

First, if you perform strength training with an MVC lasting only three seconds daily, you may not need more than 24 hours rest between bouts.  This study focussed on developing maximum muscle tension for only three seconds daily, which means there was very little if any muscle fatigue after a training session.  Since fatigue and muscle damage were minimal due to the very low dose/volume, training daily had no deleterious effects.

Second, if you do strength training only three seconds daily per exercise, it is best to perform an eccentric action only, since it will improve concentric, eccentric and isometric strength.

Third, regardless of mode of action, a single 3-seconds duration MVC daily and 15-seconds per week produced no hypertrophy at all.  This study highlights that some very low dose (volume) training methods can/will increase strength without producing hypertrophy.

Sato and colleagues predicted that this extremely low volume training method would not produce any muscle hypertrophy.  They did not expect hypertrophy for two reasons.  First, the duration of the training intervention was only four weeks, during which time mostly neural adaptation occurs to increase strength.  Secondly, the training volume was too low to trigger a hypertrophy response.

Of interest to me here is that this study may predict that many very low volume “high intensity” training protocols (such as one set once weekly) may increase strength but produce little or no hypertrophy, because they deliver a weekly dose of MVC no different from training only three seconds daily with MVC in either concentric, eccentric or isometric action.

It has been reported that near maximal muscle motor unit recruitment occurs only when the load is at least 80-85% of maximal (i.e. a 5RM) or during the last ~5 repetitions of typical sets performed to failure with typical repetition duration (i.e. 2-3 s) and lesser loads (i.e. <80% 1RM).  Evidently, in sets with high loads (>70% 1RM) all motor units are activated well before muscular failure, and even in sets with lower loads (60% 1RM) and higher repetitions (15-20), all motor units are activated 3-5 repetitions before muscular failure.3  If you continue to momentary muscular failure, all muscle fibers have been recruited and fatigued, the final repetition involves a maximal voluntary contraction, and this momentary effort to overcome the resistance stimulates the muscle tissue to grow stronger and larger.

This suggests that if one performs a single set to failure with a load less than ~80% 1RM, then the muscles involved only reach a tension level high enough to trigger strength and hypertrophy gains during the last ~15 seconds of any set taken to momentary muscular failure.

Now ask yourself, which produces more muscle strength and hypertrophy, walking or jogging for a long duration with more continuous tension (less time in the air) or sprinting for a short duration with intermittent tension (more time between steps)?  This example should make it obvious that high peak force production is more important than continuous tension for both strength and hypertrophy.

Hence, if you perform only one such set during a week, regardless of the duration of the set, you might subject the involved muscles to only about 15 seconds of high tension per week.  That’s the same amount of weekly MVC tension time used in this study by Sato and colleagues, which was found to produce no hypertrophy at all in any of the subjects despite them being novices to training.

This reminds me of a 2011 study by Bamman and colleagues seeking to identify the dose of resistance exercise required to maintain muscle strength and size previously gained.4  The study found that either 3 or 9 sets to failure once weekly could maintain strength over 32 weeks for either young or old people, but 3 sets once weekly was insufficient for maintaining muscle mass regardless of age, and 9 sets once weekly was sufficient to maintain mass gains in younger but not older subjects. 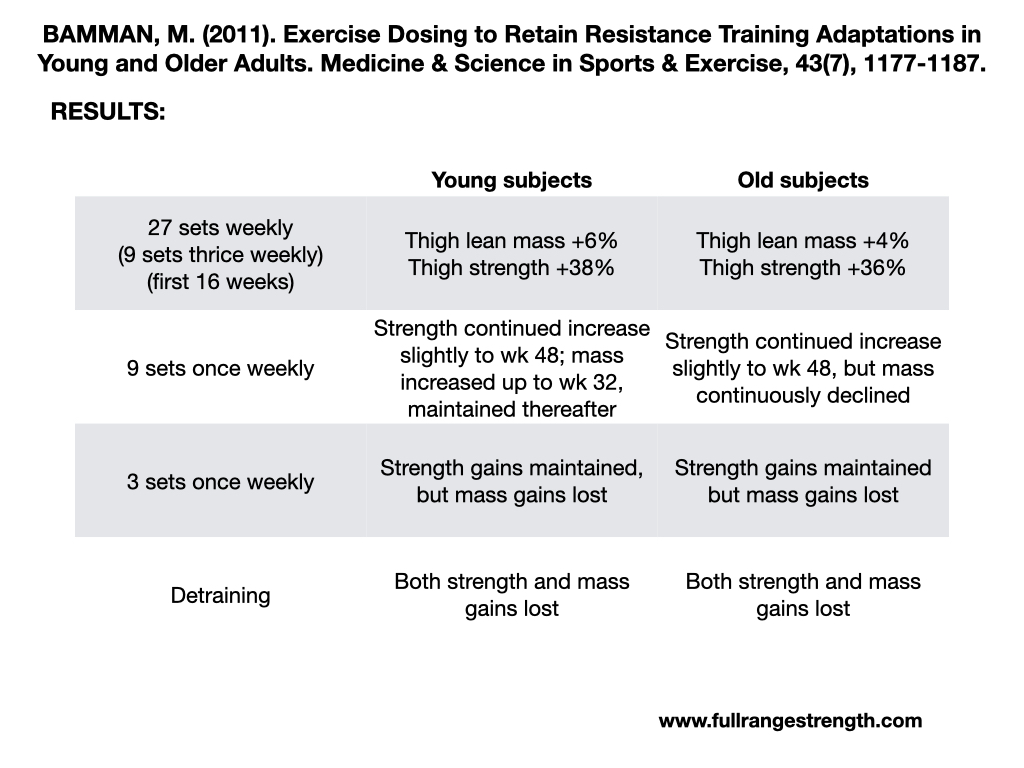 Now it is very likely that subjects in the Bamman study did not use exercise technique that would elicit sufficiently high levels of muscle tension in any one or multiple sets to maintain or increase muscle mass.  It is also evident that participants in this study by Sato and colleagues also failed to produce sufficient tension for sufficient time to trigger hypertrophy.  This may be an issue of training intensity as well as volume.