In this article I take a critical look at the rationale for for this method and review the several studies that have shown that pre-exhaustion protocols do not produce superior results.

The pre-exhaust technique was developed to get around this alleged weak link. The method involves doing a single- joint exercise for the torso muscle to "pre-exhaust" it then as quickly as possible do a multi-joint exercise for that muscle. It was claimed that then the fresh but smaller muscle ( biceps or triceps) would help the larger torso muscles (upper back or pectorals) do more work.

A simple mechanical analysis would have revealed that this was misguided. In order for one muscle to help another the two must cross the same joint and have the same function on the levers at that joint.  This does not apply to any of the pre-exhaustion protocols for torso muscles.

The biceps only functions are to bend the elbows, supinate the wrists and flex the shoulder. The latissimus dorsi extends and adducts the upper arm. Thus the biceps can't assist the lats because it doesn't perform the same function as the lats i.e. extension of the upper arm. Same applies to the triceps and pectorals or deltoids.

Moreover no one has ever established experimentally that the upper arm muscles fatigue before the torso muscles in multi-joint torso exercises, or that the quadricpes fatigue before the glutes (or vice versa) in squats or leg presses. It is unlikely this is the case since the direction of resistance in such exercises is not in direct opposition to the function of the arm or thigh muscles.

It is highly unlikely that Nature would design the body such that the limb muscles would limit the ability of the larger, stronger hip or shoulder girdle muscles. This would mean, for example, that during running, the lower limb muscles would be preventing you from using your much larger and stronger hip muscles to their full capacity.  There would be no point in having larger, stronger muscles at the hips or shoulder girdle if the strength of these muscles was ultimately limited by the smaller, weaker limb muscles.

Gentil et al performed a similar experiment using a pec dec and chest press and also reported that “performing pre-exhaustion exercise is no more effective in increasing the activation of the prefatigued muscles during the multi-joint exercise.”2

Fisher and colleagues, advocates of high intensity training, put the pre-exhaust hypothesis to another empirical test.4 They found that using the pre-exhaust method did not produce any better gains in strength or mass than performing the same movements but with a normal rest period between them. 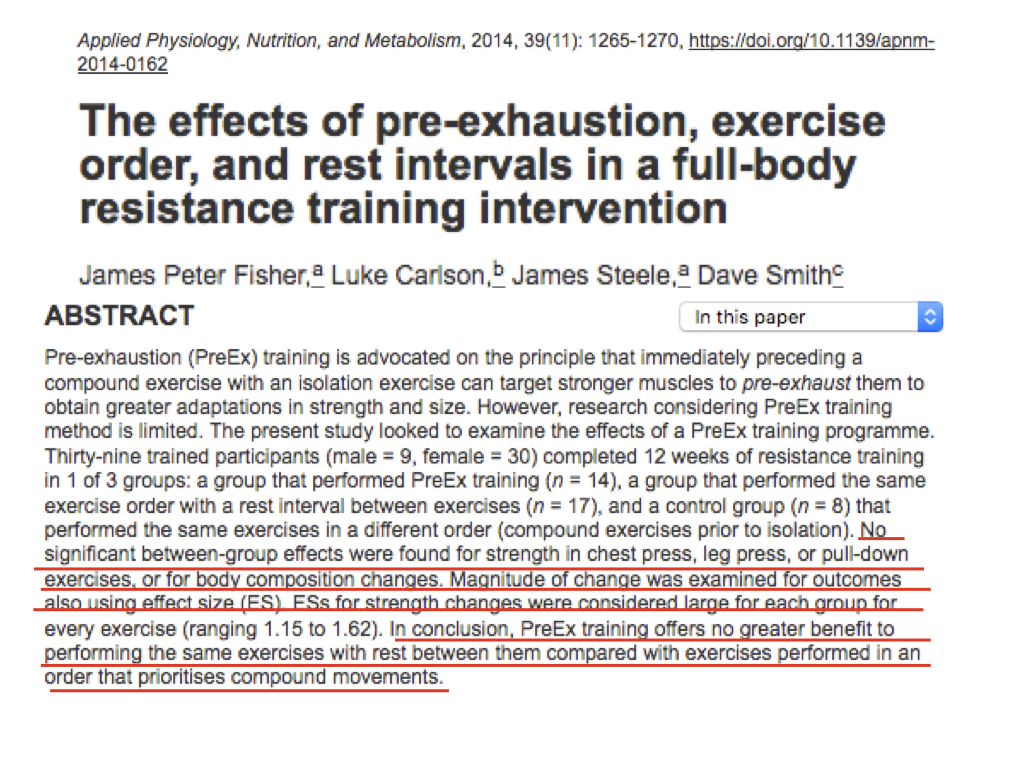 In fact, the graphic presentation of the results suggests that incorporating a normal rest period between the single-joint and multi-joint exercises shows a trend toward superior results in comparison to the pre-exhaustion method . 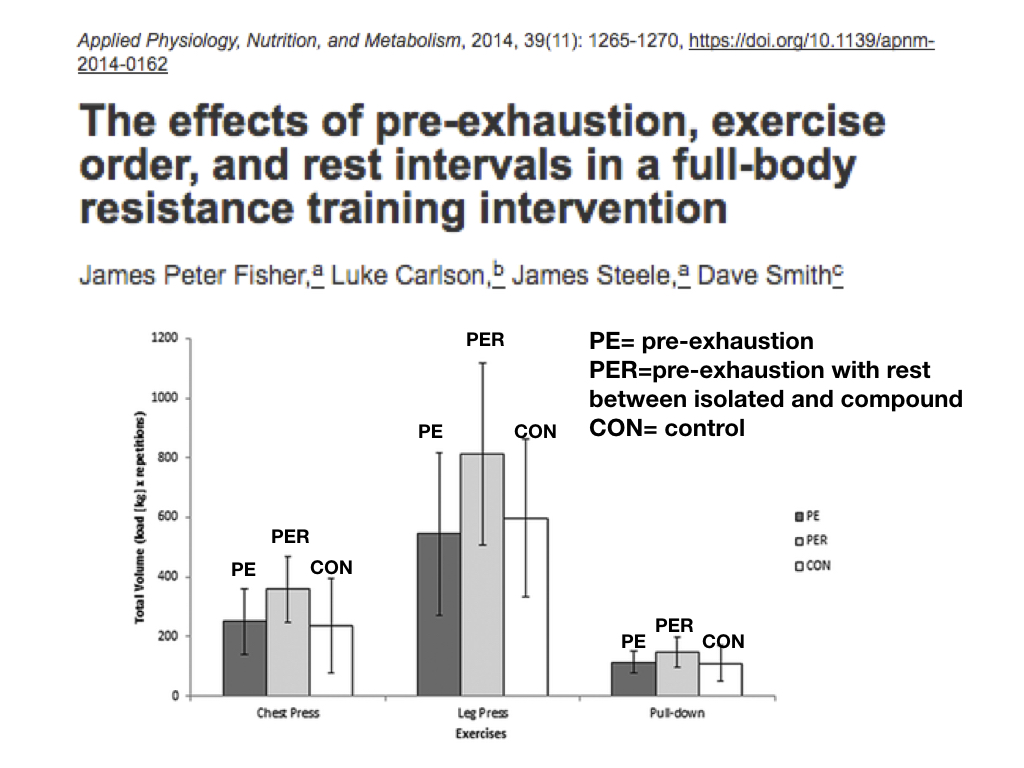 Trindade and colleagues investigated the use of leg extension as a pre-exhaustion exercise for the leg press, compared to traditional performance of the leg press alone.5  Both groups increased strength in both leg press and leg extension, with no difference between the groups for the leg press. Both groups increased thickness of the quadriceps, with no overall difference between the groups. The pre-exhaustion group showed slightly greater hypertrophy of the vastus lateralis, while the traditional training group showed slightly greater hypertrophy for the rectus femoris. These regional differences are likely due to use of leg extensions by the pre-exhaust group but not the leg press group, not a result of the pre-exhaustion method. The traditional training group gained more total body mass, almost twice as much total lean mass and slightly (insignificantly) more thigh lean mass.  The traditional training group also lost a greater % fat mass (–3.8 vs –2.2).  In the authors' words, "only the TRT group displayed an increase in total body fat-free mass, decrease in total body fat percentage, and lower limb body fat.