Can you build as much upper body strength and muscle with push ups vs bench press?

Yes. Three separate studies have reported push ups are as effective as bench press for development of strength and muscle. In addition, the push up will provide more effective training for the “core” muscles, and very likely is safer  than the bench press for the shoulders.

A standard push up (legs extended, weight on hands and balls of feet) loads the pectorals, deltoid and triceps with about 65% of your body weight.

A push up on knees loads the upper body with about 49% of your body weight.

The major advantage of the bench press seems to lie in the ability to use very small loads – less than 49% of your body weight – if necessary to start.

I say “seems to lie” because it is in fact possible to scale push ups to almost any strength level.  Simply, one raises the upper body, which results in more of body weight being borne on the feet.  The photo below shows one set up for reducing the load on the upper body. 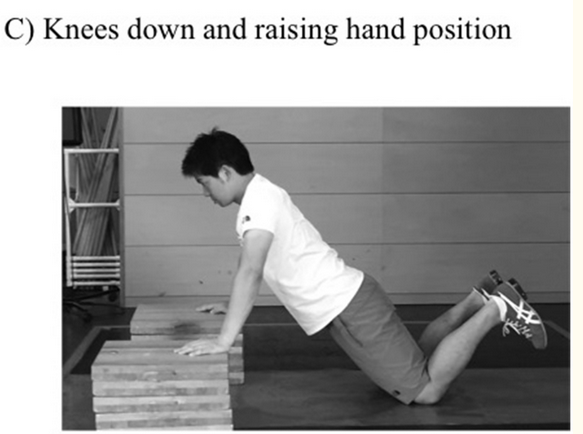 Photo from the 2017 Kikuchi study.

The hands are on stacks of what look like 1” wood boards.  As strength increases one can remove one level of boards and by this route gradually increase the difficulty of the push up.

We can use the same process with the legs extended and weight on balls of feet.  Thus there really is no difference in scalability of push ups vs bench press. 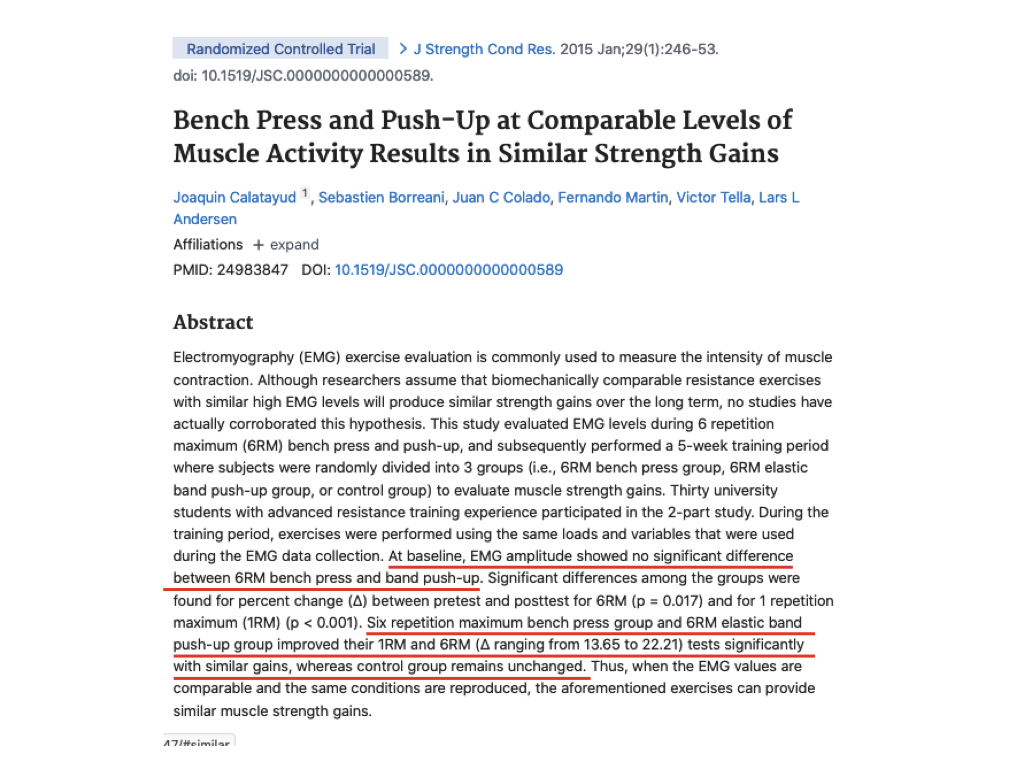 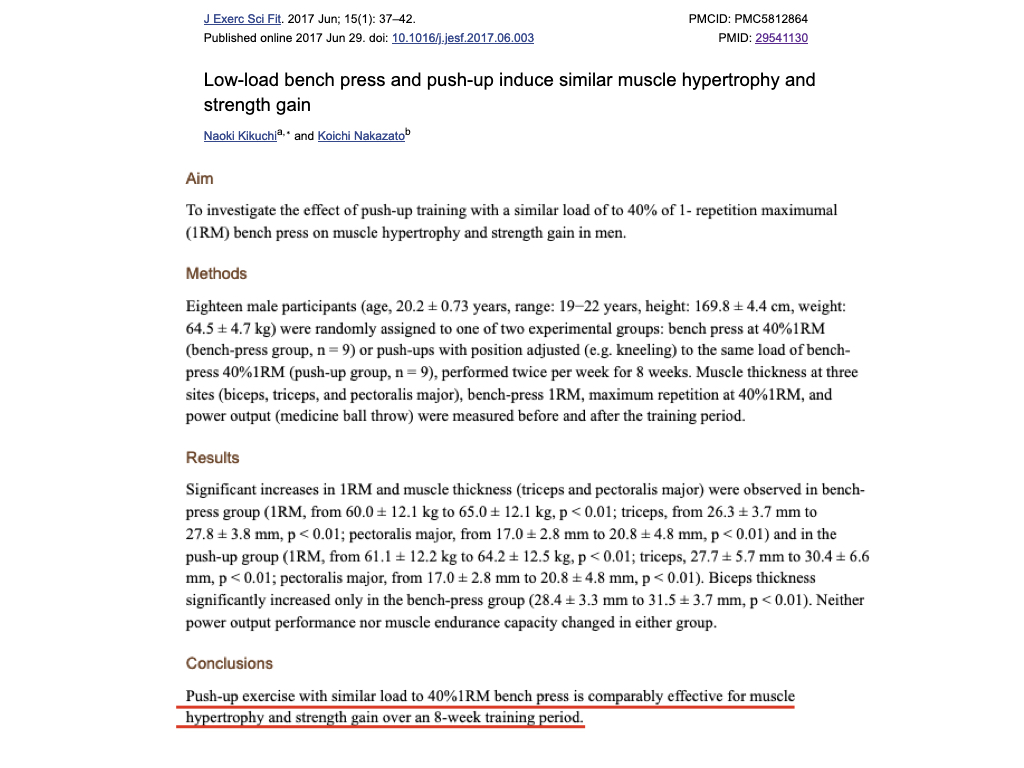 The 2019 Tillaar study of push ups vs bench press found no differences in kinematic and muscle activation between bench press and push ups performed at various loads using a weight vest to adjust push up load. 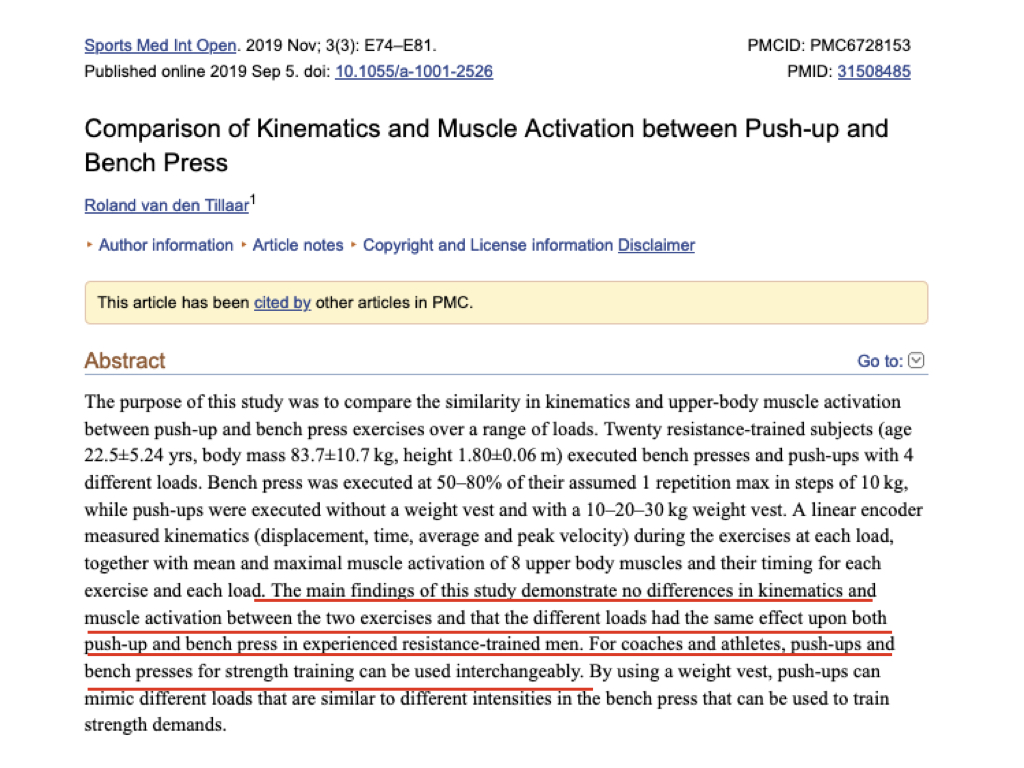 Another advantage of push ups vs bench press is that push ups involve more "core" muscle activation and are probably safer than bench press for the shoulders due to push ups being a closed chain exercise with the hands fixed, resulting in less degree of freedom at the shoulder. In addition, in the bench press you lie on the shoulder blades, which reduces their mobility for protraction and retraction and consequently endangers the shoulder joint.  Bench press is so frequently a cause of shoulder damage that “bench presser’s shoulder” is a recognized orthopedic disorder.  During a push up your shoulders can freely protract and retract, which provides optimal biomechanics for horizontal pushing, and protects against shoulder injury.

Additionally, the bench press presents a risk of dropping a heavy bar on the chest or neck, which can severely injure or even kill you.  One can find many examples of bench press gone awry on You Tube.  Here's one example.

Check out the Gaining Strength program.