Review of The Dharma Manifesto

The Sanskrit word dharma literally means "pillar, foundation."  In a Vedic philosophy and religion it refers to the fundamental laws governing the universe; in other words, Universal Natural Laws governing all things and beings.  We must base all of our actions on such foundation if we want our actions to have the support of Reality.  If we construct anything in opposition to Natural Law, it will fail.  Actions in accord with Natural Law produce order, strength and health, while actions opposed to Natural Law produce disorder, weakness and disease.  This applies to our personal lives, cultures and civilization.

As I have mentioned in my article on the good life, the concept of Natural Law permeated all traditional non-Abrahamic civilizations. In The Dharma Manifesto Sri Dharma Pravartaka Acharya explains this thoroughly:

All of these nations or civilizations existed and thrived independently of and long before the rise of the Abrahamic tradition (Judaism, Christianity, and Islam) which has waged all-out war on the Dharma tradition in search of complete dominance since its inception. Thus Sri Dharma Pravartaka Acharya correctly notes that "Dharma is synonymous with civilization itself, and is the shared ancient heritage of many of the world's people who are alive today."

The Dharma Manifesto lists some of the key elements of traditional Dharmic culture:

If you have any understanding of the history of European civilization, you will know that these were values of the Greeks, Romans, Celts, Slavs, Nordics and Germans long before Christianity took root, and indeed that Christianity violently opposed many of these elements of Dharmic civilization during its reign over Europe up until the Renaissance when Europeans began to reclaim these so-called "pagan" elements.

The Dharma Manifesto recognizes the central role of spirituality and religion in healthy civilization:

In The Dharma Manifesto, Sri Dharma Pravartaka Acharya contrasts traditional Dharma theory (dharmavada) with Marxism and modern materialistic "science".  The latter modern ideologies claim that your world and your own existence are products of a random, relativistic, meaningless, conflicting and chaotic purely material nature.  In contrast, Dharma theory correctly asserts that our world is a product of intelligent design and has a deep structural purpose and meaning, which gives our world its stable patterns of movement and intelligibility.  The patterns and design evident in the natural world are manifestations of Natural Law (dharma) and Dharma is nothing less than a manifestation of the Transcendent Intelligence, commonly called the Supreme Being or God.

When we observe Nature, we see a miraculous harmony of diverse elements –– species, ecosystems, weather, climates, and so on.  Despite diversity and seeming opposition, the Tao achieves harmony.  Dharma theory seeks to replicate the beauty and harmony of Nature in individual humans and human society by application of the Natural Law to cultivate the health of both individuals and whole human societies.  Thus, the Dharma Manifesto is what traditional Confucian-Taoist medicine calls shang-i:  higher medicine.

In my article comparing the outcomes of modern Western science to those of Confucian-Taoist medicine (commonly called traditional Chinese medicine) I noted that Western science wages war against Nature and humanity.  I argued that Western science is fundamentally anti-natural and anti-human because it is base on a false conception of Nature borne from the marriage of some false Greek philosophy (specifically, Parmenides, Plato, and Aristotle) and the Abrahamic religious tradition (Judaism and conventional Christianity).

Chapter 3 of The Dharma Manifesto discusses the Conflict Theory of Abrahamism in depth.  The Acharya quotes Jacob Burkhardt (1818-1897):  "Among the Jews we find history viewed as a great antithesis, i.e., a theocracy composed of the true Yahweh worshippers on the one hand, and all their enemies ranged against it on the other.  Their history is a series of indictments, argumentations, and testimonies in a long, drawn-out lawsuit."   The Acharya comments:

Judaism views Jews as "the chosen people" who are intrinsically superior to non-Jews and entitled to own and rule over Gentiles, and, as I will show below, Jews believe they are entitled to injure Gentiles by any means necessary; in short, Jewish authorities have stated that Jews are commanded by Yahweh to conflict with all non-Jews.  Orthodox Christianity accepts the Jews as "the chosen people" and also commands Christians to convert all non-believers to Christianity, which brings Christians in conflict with all non-Christians (hence the long history of Christians waging war on non-Christians).  For example, Charlemagne's massacre of 4500 non-Christian Saxons in 782 was inspired by the Bible; Charlemagne desired "to act like a true King of Israel," to emulate the biblical tale of the total extermination of the Amalekites by David.  Islam maintains that Muslims must conquer all infidels; the concept of jihad "struggle" (i.e. conflict) is central to Islam, and in his Study of War, esteemed political scientist Quincy Wright ranked Arabic civilization as moderately warlike, whereas Indian, Hindu, and Chinese were ranked as peaceful.  From 711 to 718, Muslims invaded Hispania (in the Iberian Peninsula), leading to almost constant warfare between Muslims and Christians. This was followed by the Crusades during which Christians re-conquered much of the territory previously seized by the Islamic state.

Marxism is, in the Acharya's words, the "philosophical apex of Abrahamic-inspired Conflict Theory." Few people know that Karl Marx was born into an allegedly "non-religious Jewish" family. His maternal grandfather was a rabbi, while his paternal line had supplied rabbis for nearly a hundred years before his birth, including his paternal grandfather Meier Halevi Marx (read Marx's biography on Wikipedia).

Whether he was aware or not, Marx simply repackaged Abrahamic Conflict Theory.  In Marxism, the workers (proletariat) are the chosen people, and they are inevitably in conflict with "capitalists" or aristocrats who own the means of production.  The heaven of Abrahamic religions is replaced with the utopian communist state.  Conflict between the workers and the aristocrats is inevitable and desirable because it will, according to Marx, inevitably lead to an utopia, the "dictatorship of the proletariat". Instead of sacrificing animals (as in Old Testament Judaism) or "the lamb of God" (Jesus) for expiation of sin, Marxism sacrifices all opponents to communism (some 61 million people in the Soviet Union, and 110 million by all communist regimes between 1900 and 1987).  For Marxists, Marx himself replaces God.

The Acharya clearly defines the Dharma Manifesto by contrasting it with the Marxist manifesto.  Some of the stark contrasts appear in the table below 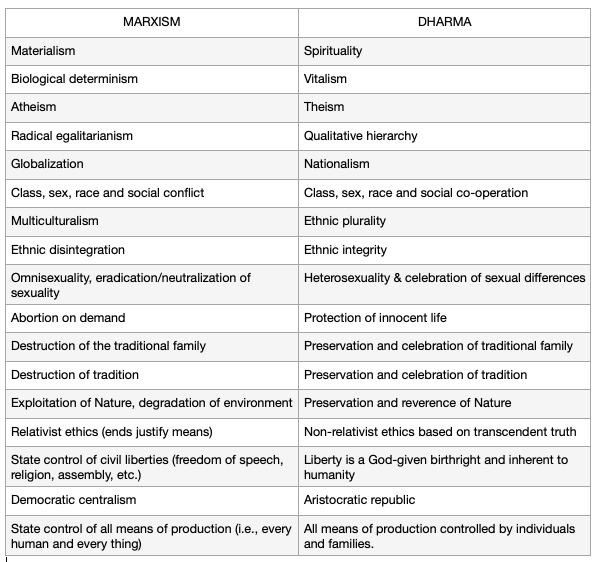 Neither Liberal Nor Conservative

In a similar vein, Dharma Nationalism rejects the Binary Con of Capitalism vs. Socialism.

Economically empowered, land-owning and dharmic extended families provide both the best means of production and the best social safety net.  This topic is too large to cover in this book review but Bruce Holbrook covers it extensively in The Stone Monkey.

In the last Sri Dharma Pravartaka Acharya outlines governance and policies of a Dharma Nation. As mentioned above, some of the policies would be considered 'conservative' and some 'liberal.' The central point is that Dharma governance aims at affirmation of life, liberty, and pursuit of happiness via spirituality.

A Dharma Nationalist government encourages a culture that holds human life as sacred. Thus, it would discourage all forms of killing, including abortions and killing of animals, with the natural exceptions of cases of self-defense, preservation of life, martial defense of the nation, law enforcement, and capital punishment. Regarding the latter, a Dharma nation will implement the death penalty for those convicted of crimes of murder, rape, child molestation, torture, kidnapping for ransom, bestiality, and treason.

Pornography and sexual exploitation will be severely punished, because these undermine individual, family and social health.  Of interest, according to JewishContributions.com, Jewish (Abrahamic) people have played central roles in the promotion of pornography, and according to Al Goldstein, these Jews have promoted pornography with the intent of "defiling Christian culture," i.e. specifically to create conflict with Christians. 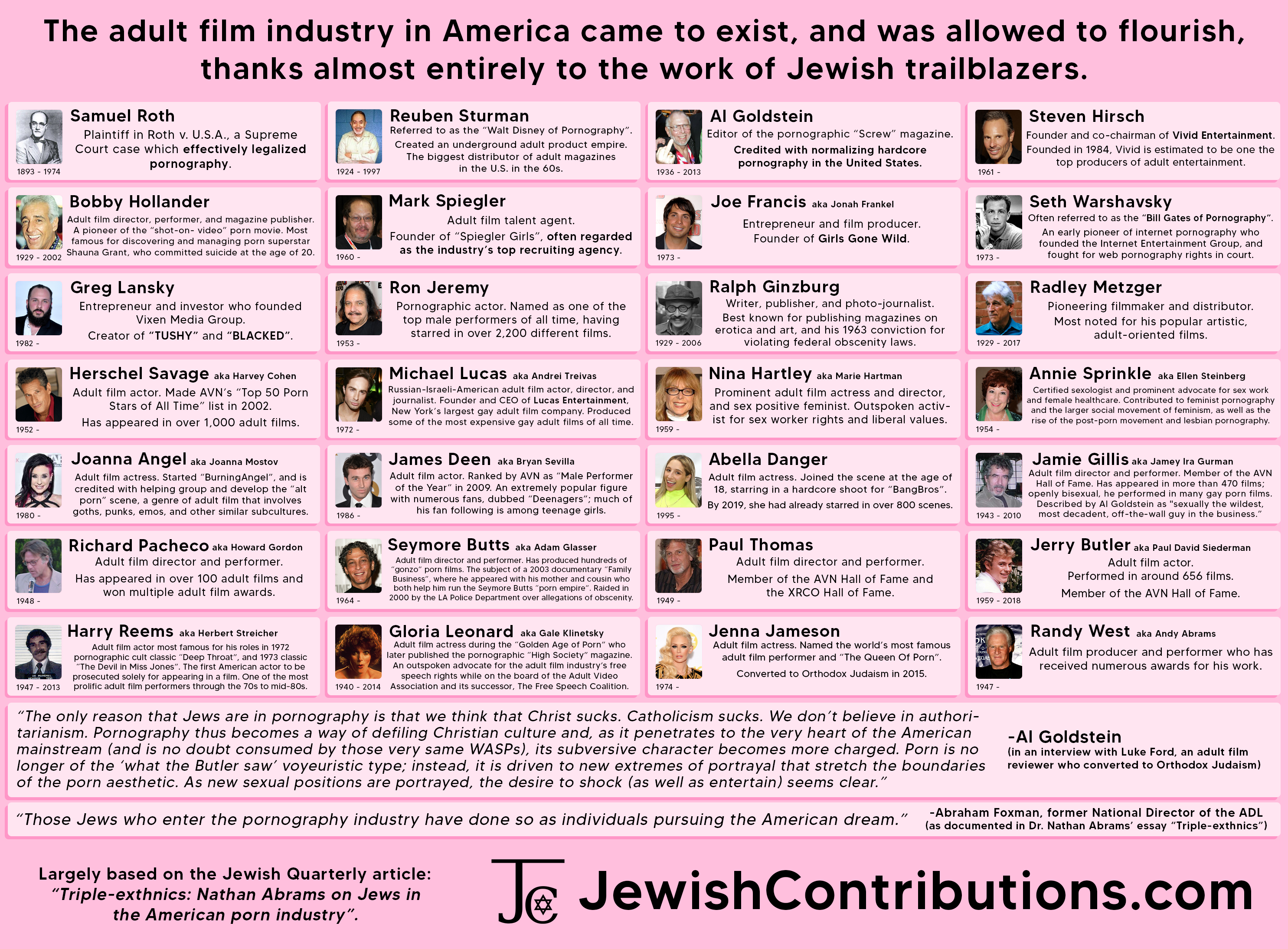 Usury (charging interest on loans) will be outlawed.  Of interest, the practice of usury has been forbidden in many society, and condemned by almost all religions, with the notable exception of Judaism, which appears to make usury a religious duty for Jews.  Indeed, according to Maimonides, who is hailed as "one of the foremost rabbinic decisors and philosophers in Jewish history," Jews are commanded to impose usury on non-Jews, specifically in order to not give non-Jews any rest and cause non-Jews financial losses:

This confirms that the fundamental Abrahamic ideology––Judaism––is a type of Conflict Theory that promotes social division and conflict by commanding believers to intentionally do harm to non-believers. Compare this with Vedic or Taoist ethics which adhere to the ethic of ahimsa (non-violence), requiring adherents to treat not only all people, but all beings (animal, vegetable, and the entire natural world) with respect and care.

It is noteworthy that Jews are noteworthy for their involvement in banking in general and especially in establishing central banks including the so-called "Federal Reserve" which is not Federal (its a private bank) and has no reserves, but is responsible for devaluing the dollar through money-printing.  Jewish financial elites or banks involved in usury and devaluation of currencies include the Rothschilds, J.P . Morgan, Goldman Sachs, Alan Greenspan, Milton Friedman, Ben Bernanke, Janet Yellen, and others:

Here are some relevant infographics from JewishContributions.com. 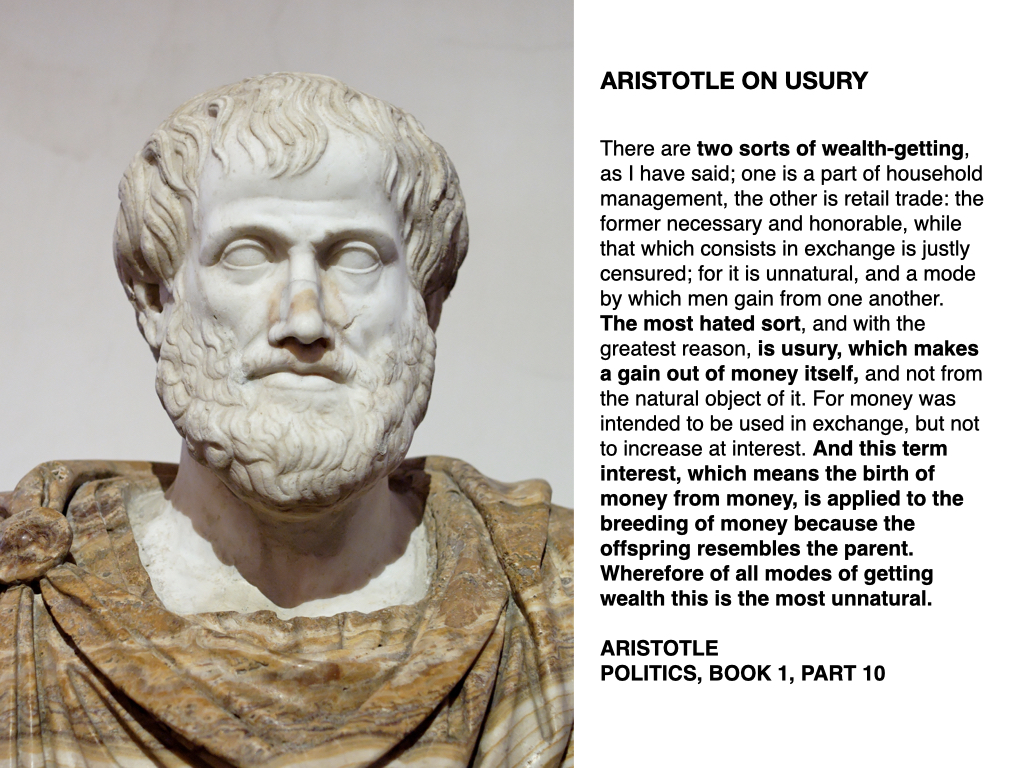 Space does not permit me to further expand this discussion of the specific policies of the Dharma Manifesto.  You will have to read the book yourself, as I highly recommend.

Sri Dharma Pravatarka extensively discusses specific strategies for advancing the Dharma cause.  The Dharma Nation movement is not a political party, nor does it endorse any extant political party.  Indeed, in regard to American politics, he recommends that if Dharma activists vote, they should generally speaking vote for whatever third party comes closest to the aims of the Dharma Manifesto (historically, this would have been The Natural Law Party, now defunct).  Instead, it is a metapolitical movement seeking to influence politics by education to change minds and hearts.

Further, a Dharma Nationalist can not embrace any form of Abrahamic ideology including Judaism, Christianity, Islam, or Marxism because these have proclaimed themselves the sworn enemies of Dharma nations.

Who Should Read the Dharma Manifesto?