The Hypercarnivore Diet provides evidence and logic supporting the radical notion that we are designed by Nature to obtain at least 70% of our nutrition from meat and fat, with very little or no plant foods.  With hundreds of references to basic science textbooks and studies of human anatomy, physiology, biochemistry and nutrition, it shows that we require an animal-based diet to maintain health and fitness and whole plant foods are unimportant and potentially hazardous to health.

The Hypercarnivore Diet Healed My Psoriasis And More

Over 40 years of experimenting with diet, I have eaten many variations of plant based diets, including lacto-ovo vegetarian, whole foods omnivore, macrobiotic, paleo, and strictly whole foods vegan.  In 2011 I adopted a whole foods plant-based vegan diet and continued that for more than 5.5 years, during which my health and vitality declined along with my serum cholesterol.  In late 2016, while still on that diet, I had a blood test which showed I had low globulin, a sign of protein deficiency, and low phosphorus, indicating dietary phosphorus and vitamin D deficiency.  I started adding small amounts of animal products back to my diet in March of 2017.  I continued eating a whole foods plant based diet, but with some animal products added, until May of 2017, when I adopted a hypercarnivore diet.

Almost all of my dietary experimentation was aimed at reducing, reversing and recovering from seasonal allergies, dermatitis and psoriasis, which I have had in some form for as long as I can remember.  So long as I ate plant based diets, the conditions did not improve or got worse, unless I used medication (either pharmaceutical or herbal).  During the last year or so of the 5+ years that I ate a whole foods plant based vegan diet my psoriasis and dermatitis got markedly worse and started spreading. In Spring of 2017 I read a post on ZeroCarbZen.com by Candi Leftwich, who reported obtaining almost complete relief from Crohn’s disease and psoriasis by eating only meat, fat and water for 3 months.  At that point I realized that I had tried to heal my condition by restricting animal foods and eating whole plant foods for nearly 40 years, but I had never tried severely restricting plant foods for any length of time.  So I decided I needed to try a highly carnivorous diet to heal my skin. 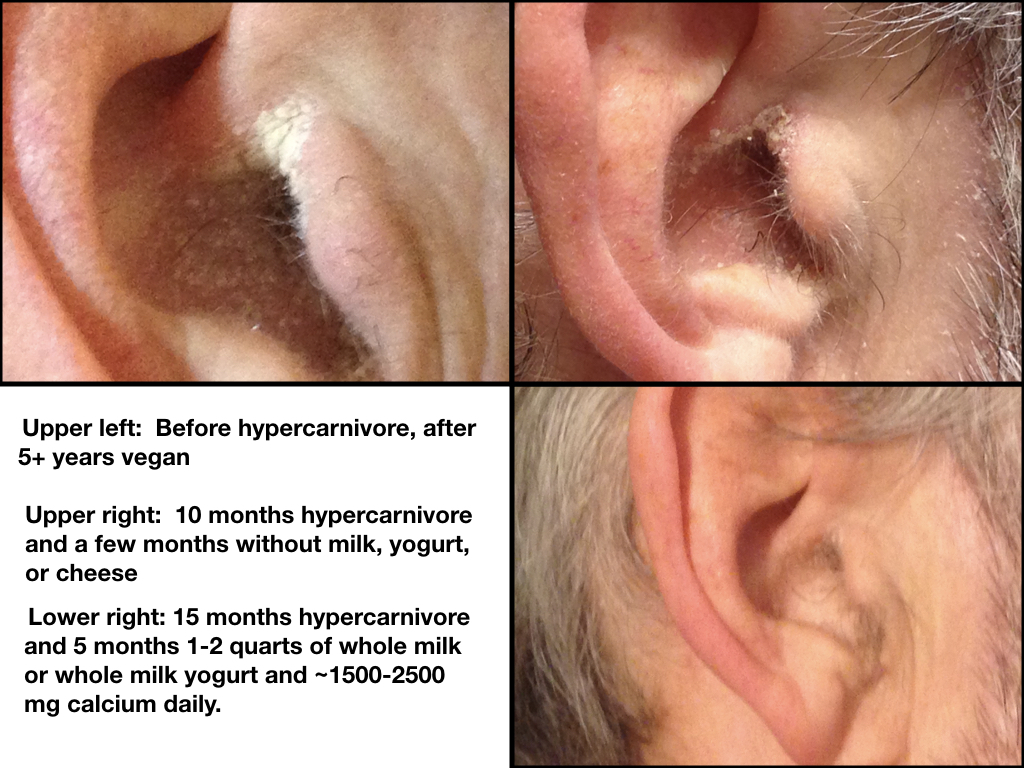 This is only one of the lesions that has improved dramatically.  Besides healing the skin gradually over the course of more than a year, The Hypercarnivore Diet has had other positive effects:

These results led me to research the medical and scientific literature to find out why it worked.  My results and literature research have convinced me that many people have a topsy turvy view of both animal and plant foods.

Regarding animal foods, many people believe they are more or less toxic and of low nutrient value compared to vegetables, whole grains and legumes, whereas in fact meat, eggs and milk have a low toxicity and the most bioavailable nutrition.

Regarding plants, many people believe that fruits are the worst of plant foods because they provide simple sugars, while vegetables, grains, legumes, nuts and seeds are health-promoting foods because they are "complex carbohydrates."  In the book I provide evidence and reasoning that fruits are the best plant foods and the others are more or less toxic and best limited or avoided.

I collected my story and the scientific basis for adopting a hypercarnivore diet – composed of meat, milk, eggs and fruits according to individual response – in this book

The Hypercarnivore Diet is 475 pages long, and includes 16 chapters:

The story of how I came to the hypercarnivore diet after more than 40 years eating and promoting diets rich in whole plant foods, including vegetarian and vegan whole foods diets.

Explains the evolution of health awareness, why blood tests are not necessary to identify health and can mislead us, and major signs of health.

An extensive review of the evidence indicating that humans are specially adapted to eating fruits, meat and fat.  This chapter is more than 70 pages in length and has more than 200 references to scientific books or articles.

An extensive review of the evidence indicating that fiber, carbohydrates, fats and phytochemicals in commonly consumed plants can in large enough doses damage the human teeth and digestive tract and have many other deleterious effects.  It also includes a section on possible hormetic effects of eating some plant foods.  This chapter is 40 pages long and includes more than 90 references to scientific books or articles.

Discusses the evidence, published in standard biochemistry textbooks and journals, indicating that fat is the preferred metabolic fuel not only for humans but all other mammals including chimps and gorillas, as well as birds.

Discusses the difference between animal and plant fats, and explains why saturated fats are not harmful, and can't be harmful, because Nature has selected them as one of the primary forms of energy storage in all mammals.

Explains why an animal-based diet is nutritionally superior to a plant-based diet, and documents that a diet consisting exclusively of animal source foods can meet all human micronutrient requirements including that for vitamin C.  Extensive discussion of all essential vitamins, referring to primary sources documenting that plants provide vitamins and minerals in forms that are of low bioavailability, and that eating plants rich in carbohydrates probably increases our requirements for many vitamins and minerals.  This chapter includes an extensive discussion of calcium requirements, including evidence that our actual requirement may be higher than admitted by authorities, and how to satisfy those requirements using animal products

A discussion of the foods included in and excluded from The Hypercarnivore Diet. Foods are divided into Essential & Primary, Optional Animal Foods, Optional Non-Animal Foods, and Avoid/Severely Restrict Foods.  This chapter includes extensive discussion of scientifically estimated maximum protein and fat intakes, potential benefits of including optional dairy products, why some people may want or even need to include some non-animal foods, ranking of optional non-animal foods, what plant foods to studiously avoid and why. Includes suggested starting quantities of meat, fat, and other foods to meet nutrient requirements eating minimal or no plant foods.

Extensive discussion of conventional grain-fed animal products in comparison to exclusively grass-fed products.  Discusses hormones, antibiotics, chemical and pesticide residues, vitamin and mineral contents, and essential fatty acid contents.  Provides evidence (scientific references) indicating that grain-finished conventional animal products are at least as safe to consume as grass-fed, with no hazardous residues, and one can obtain adequate intakes of all essential nutrients including omega-3 fatty acids from grain-finished beef and dairy products.

Explains why Nature (natural selection) has favored humans who prefer to cook most of their animal products, and discusses potential benefits of including a small amount of raw animal products in the diet.

An extensive discussion of ketosis and high protein intake.  Provides evidence and reasoning supporting consumption of a high protein diet according to appetite and satisfaction, as opposed to restricting protein in an attempt to increase ketosis.  Issues discussed include the impact of dietary protein on ketosis, protein and fat ratios in diets of wild carnivores (non-human and human), why Nature favor glucogenesis over ketogenesis, fasting blood sugar effects of high protein low carbohydrate diets (based on Inuit data), data casting doubt on the idea that the benefits of ketogenic diets are primarily due to ketosis, dissociation between ketosis and fat loss, how restricting protein can lead to metabolic and hormonal problems (e.g. hypothyroid) due to insufficient amino acid availability, and evidence that very high protein diets suppress cancer growth and favor autophagy.

An effort to provide an evolutionary explanation for the dietary divergence between humans and the other great apes, pulling together some data that is ignored by proponents of the idea that humans descended from a frugivorous ancestor significantly similar to modern chimpanzees.  This data indicates that the last common ancestor of chimps and humans was not likely similar to the modern chimp.

Answers to some questions I have received.

The Hypercarnivore Diet is not an intellectual diet, based on ideology about foods.  It is a diet based on human nature.  This chapter wraps up the book, asking readers to bypass eating ideology in favor of eating according to biology, using taste, hunger, satisfaction, and other naturally selected biological guides to optimal nutrition instead of concepts such as kcalorie balance, optimal macronutrient ratios, and so on.

Get The Hypercarnivore Diet!

Paperback and Kindle versions available on Amazon, where you can also browse the text:

HOME OF THE HYPERCARNIVORE DIET

My book on time-restricted feeding and intermittent fasting. Get  a hard copy from Amazon here.