To get or stay lean, use these five best simple fat loss diet practices:

The first of the best fat loss diet practices is to eat whole foods with a moderate to low energy density.

Energy density refers to the number of calories per gram of food.  The table below shows the energy density of some common foods. 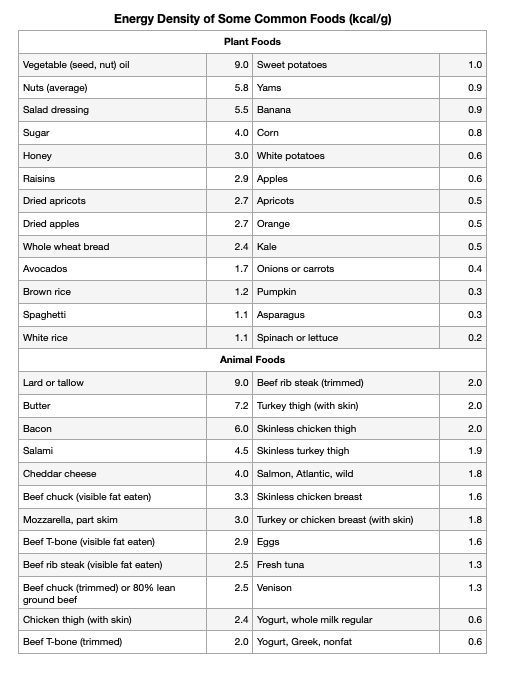 From the table above you can note that fat has the highest energy density (9 kcal/g) and drives up the caloric density of foods dramatically.

Therefore, moderation of fat intake is one of the best fat loss diet practices because it will help you reduce the energy density of your diet.  Fat-rich foods additionally appear to offer the lowest satiety relative to energy content. This may be at least in part due to the fact that fat is very compact, taking up very little space in the stomach relative to its caloric content.

Studies indicate that most people eat 3-4 pounds (roughly 1.5-2 kg) of food daily to obtain satiety.  Simply, you have to eat enough food by weight and volume to feel full.  The higher the energy density of the foods you eat, the more energy (calories) you will consume en route to feeling full.

Most people do not want to weigh and measure everything that they eat.  Nor do people want to leave the table feeling hungry.

Looking at the table, you can see that if you want to eat a lot of food but not overeat energy, your best choices are reduced fat dairy products, fresh fruits, tubers (potatoes, sweet potatoes), and grains cooked in water (brown or white rice, noodles, oatmeal, etc.).

Cutting salt out of your diet is one of the best fat loss diet practices.

Salt stimulates your appetite.  A human study found that adding salt to food increased subjects overall food and energy intakes by 11%, and increased energy intake of high-fat meals by 60%!

This is well known to chefs and restauranteurs. They give you salty foods as “appetizers” so you will order and eat more food, increasing their profits off of you.

Similarly, many people consider starches (potatoes, rice, bread) “bland” and unappetizing without the addition of salt.  Who would eat french fries or potato chips without salt?

Salt is used to make palatable the unpalatable! When you put salt on food you confuse your taste receptors so that they are not able to play their proper role in regulating your food intake.  Instead of tasting the food, you taste the salt.

Another of the best fat loss diet practices is eating adequate lean protein.

Protein-rich foods appear to be the most satiating, followed by carbohydrate-rich foods and fat-rich foods in that order [study].

However, the satiating effect of protein is limited.  Beyond some limit, which you need to determine for yourself, you will not get more satiation by pounding down more protein. Since some high protein foods are also high in fat, an overemphasis on protein-rich food can easily lead to excessive energy intake, particularly in smaller and largely sedentary individuals.

As a guideline, this review suggests that a protein intake of 1.2-1.6 g/kg bodyweight will likely provide as much protein-induced satiety as is possible to get from dietary protein.  That’s 50-100% more protein than the Recommended Dietary Allowance, but not as much as one might think. 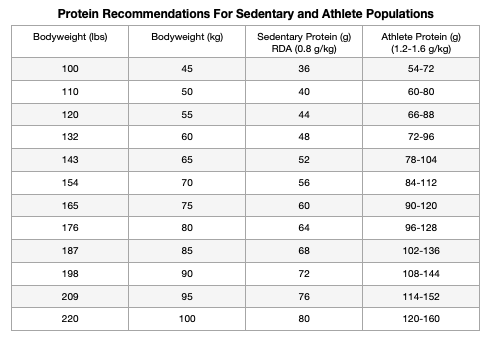 Another of the top fat loss diet practices is eating adequate carbohydrate.

As mentioned above, carbohydrate-rich foods are generally more satiating than fat-rich foods.  This occurs because eating carbohydrate–– like eating protein–– triggers insulin release, which is detected by the central nervous system as a signal for satiety.

Yes, one of the reasons you feel satiated after high protein meals is their release of insulin, which plays a role in stimulation of protein synthesis after ingestion of amino acids from protein.

Contrary to what you may have heard from some advocates of low carbohydrate diets, insulin produced in response to ingestion of either protein or carbohydrate does not stimulate appetite.  On the contrary, endogenously produced insulin reduces food intake.

Anyway, this means that eating carbohydrate-rich foods can be one of the best fat loss diet practices because it will contribute to satiety between meals.  Thus eating adequate carbohydrate from low-energy density sources––fruits, tubers, and grains cooked in water–– will help you stay satisfied with less total food energy intake.

As I have mentioned, most people do not want to have to weigh and measure every bite of food they consume in order to calculate energy balance.  Its just cumbersome and time-consuming.

The bottom line for losing fat is you have to eat and produce less fat than you burn.

To accomplish that, you just have to eat less!

If you eat 4-6 times daily, you will need to plan your meals to restrict fat, carbohydrate or calories.  When you combine frequent eating with some form of restriction, you end up with smaller meals.

This can lead to a problem.  Remember that the average person eats 1500-2000 g of food daily.  You need the volume of food to feel full in the stomach, which triggers satiety.  However, as you reduce the size of meals (by cutting out grams of fat, or grams of carbohydrate, or both), meals become less satisfying!

The result can be that you stop eating at meals before you feel satisfied––in order to restrict calories, carbohydrates or fat grams––then soon find yourself unable to stop thinking about the next meal!

An alternative way to eat less––without having to weigh and measure or count anything––is to reduce your feeding frequency.  That is, eat a fully satisfying amount and variety at meals, but eat fewer meals, less often.

Eating less often may be the best of all the best simple fat loss diet practices.

First, cut out all snacking.  Don’t eat between meals!

Second, reduce your meal frequency.  Most adults with primarily sedentary lifestyles do not need more than 2-3 meals daily.

In fact, if you go back in time, when people were more physically active (due to less mechanization), they actually ate less frequently than we do today.

Among traditional horticulturalists and agriculturalists, adults didn’t eat much if anything until after spending several hours in the morning and/or before noon doing farm or kitchen chores (including preparing the first meal from scratch). The English word “dinner” comes from the Old French disner which originally meant “breakfast,” that is, the meal that comes after the extended daily fast. In French and English “dinner” traditionally referred to the main meal of the day, which in pre-industrial times was taken sometime between late morning and midday (after morning work). The second, smaller meal was supper, usually taken well before sunset. The word “lunch” originally meant  “hunk of bread” and referred to an afternoon snack – not a full meal – had between the first (midday) meal and supper. Only the wealthy, overfed aristocrats ate more than two main meals daily, and they were most prone to obesity, gout, and other diseases.

If you eat only 2 meals daily (or even only one on some days), you will have a good appetite when it comes time to eat and will naturally prefer to eat nutrient-dense foods at those meals.  Moreover, if you eat whole foods it will be very difficult to eat more substantially food than you actually need in just 2 meals.

When you eat only 2 meals daily you also can arrange them so that you get at least 16 hours fasting each day.  This allows your body to exit the fed state and enter the fasted state, during which hormonal changes take place which favor the oxidation of body fat as well as excretion of excess fluids.

This approach, called time-restricted eating, has been shown to improve metabolic health markers without specifically restricting either fat or carbohydrate.

The more I learn about the benefits of time-restricted eating, the more I feel inclined to believe that many of the ills attributed to fat or sugar intake are actually due to eating too often and at the wrong times of the day.

As discussed in this 2021 paper, research and basic circadian biology indicate that time-restricted feeding produces the best metabolic effects when aligned with circadian rhythms.

To align with Nature simply eat all meals between sunrise and sunset.  Do not eat any food other than milk between sunset and sunrise.

To wrap up and review, the five best simple fat loss diet practices are: