Salt promotes atherosclerosis –– you may not have heard this before, but accumulating evidence indicates that salt injures the lining of the blood vessels, setting the stage for atherosclerosis.

Many people are stuck in the binary con regarding diet and disease (as I have been).  It seems the powers that be have succeeded again in dividing the people to fight amongst themselves in the diet-disease debate.

In one corner you have vegans and others advocating plant-based diets who believe that all diet-related diseases are caused by eating meat, milk and eggs (I've been there, done that).  Some of the vegans have swallowed so much poison that they are ready to kill or imprison people who honestly disagree with this perspective.

In the other corner you have exclusive carnivores and others advocating low carbohydrate –– that is, low plant food –– diets.  These people believe that all diseases including atherosclerosis are caused by sugar and other materials derived from plants (also been there, done that).

After having studied this problem for decades, I have come to believe that this debate like so many others is manufactured by the powers that be––"the establishment"––to keep people from understanding the truth so that they will continue to eat what really makes people sick, thereby keeping the "health care industry" and pharmaceutical profits rolling in.  This debate also keeps the people warring among themselves so that they don't turn against the elites who keep feeding them lies.

Both seek the cause for atherosclerosis among the macronutrients, based on epidemiological associations.  The plant-based crowd points to the weak epidemiological association between meat-eating and cardiovascular disease.  The animal-based crowd points to the prevalence of of cardiovascular disease among agriculturalists, including ancient Egyptians, and its absence among meat-eating hunter-gatherers.

The fact that either animal products or plant products may be linked epidemiologically with atherosclerosis and cardiovascular disease, except among selected pre-industrial hunter-gatherer (e.g. Blackfoot), pastoral (e.g. Masai) and horticultural (e.g. Kitava) populations suggests that the atherogenic factor is not one of the macronutrients, but some toxin added to both animal and plant foods in agricultural/civilized populations.

Those who seek for the cause among the non-toxic macronutrients overlook salt––as I once did.  Among modern and ancient agricultural populations, meat-eaters consume plenty of salt.  Meat, dairy and eggs are heavily seasoned and preserved with salt.  Similarly, most people eating high carbohydrate diets also use plenty of salt, often even more than meat-eaters.  Most people consider unsalted grains, rice, pasta, and potatoes bland and tasteless, so they “season” them with plenty of salt or have heavily salted foods (miso, tamari, soy sauce, sauces, pickles, etc) as condiments.  Bread is one of the main sources of salt in the modern diet.  Even candies and chocolates have salt added. 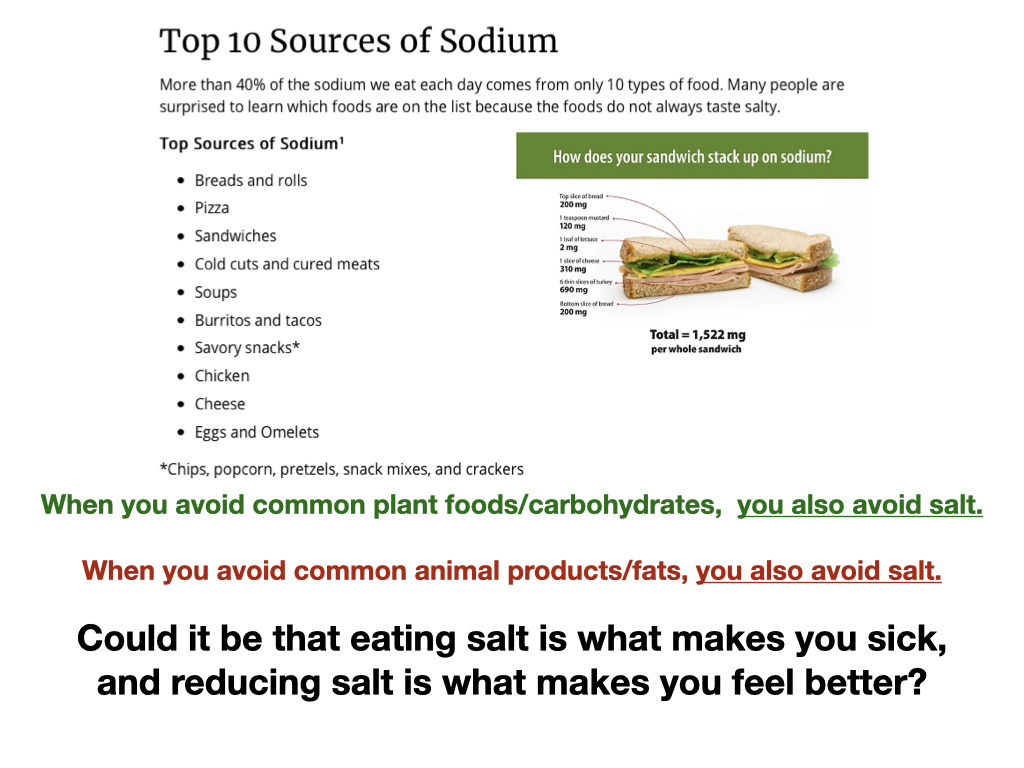 Crystalline salt is not an essential nutrient.  We can obtain plenty of sodium and chloride from foods.  Salt is not added to foods because we need the sodium chloride, but because salt kills bacteria and thus is a chemical preservative and flavoring.  Yes, it is natural, but natural does not mean safe.  Salt kills bacteria, it kills plants, it kills animals and now we have evidence salt promotes atherosclerosis to kill humans.

Accumulating evidence indicates that salt consumption is the primary driver of atherosclerosis.

A 2007 study reported that plasma sodium in the high normal range stiffens vascular endothelium and reduces nitric oxide release.  This leads to hypertension and inability of the vascular system to dilate appropriately to stress.  This would set the stage for an artery getting clogged by a clot during an emotionally stressful or physically demanding event.  It also would produce generally impaired circulation (due to constriction of arterioles) and particularly difficulty with sexual arousal and performance (which rely on nitric oxide release and genital blood engorgement). 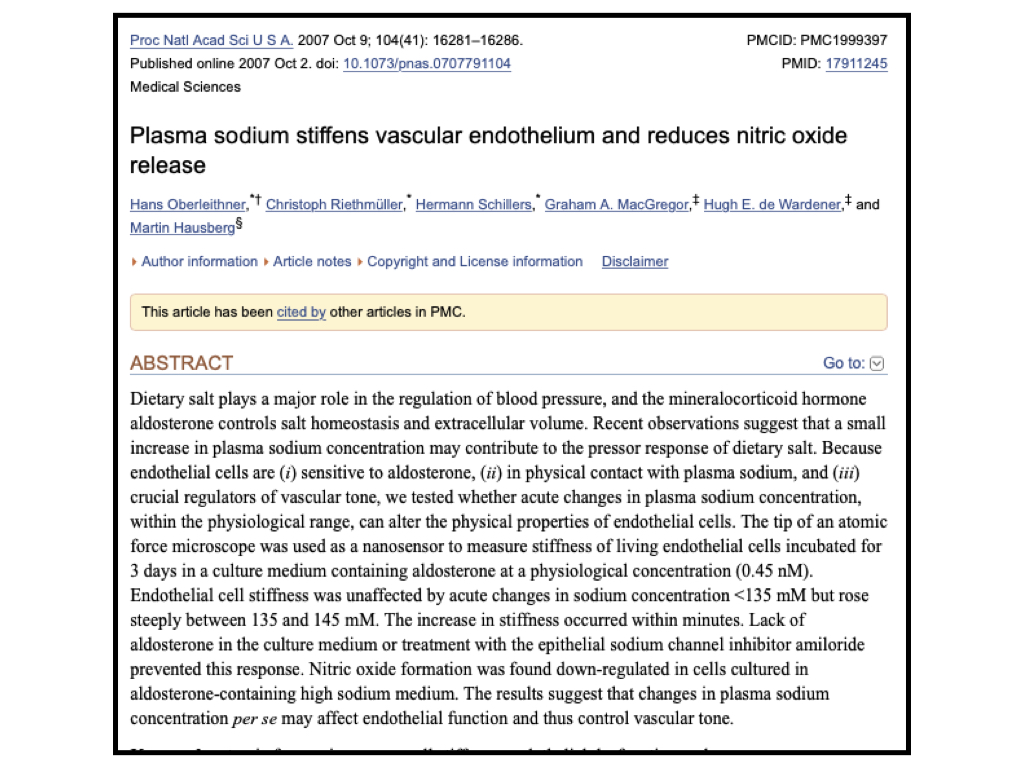 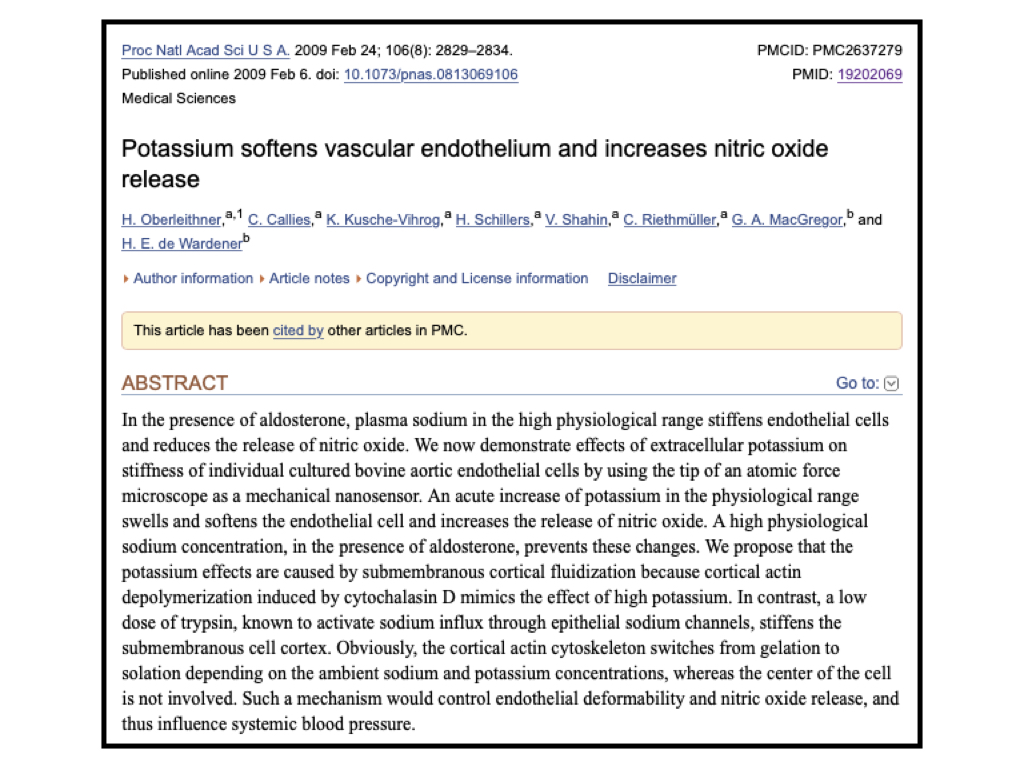 A 2014 study found that elevated sodium concentration stimulates endothelial production of the von Willebrand factor, a key initiator of the clotting cascade, leading to increased coagulation and thrombogenesis.  If you combine this with coronary or cerebral arterial constriction, hardening and inflammation, you have a heart attack or stroke. 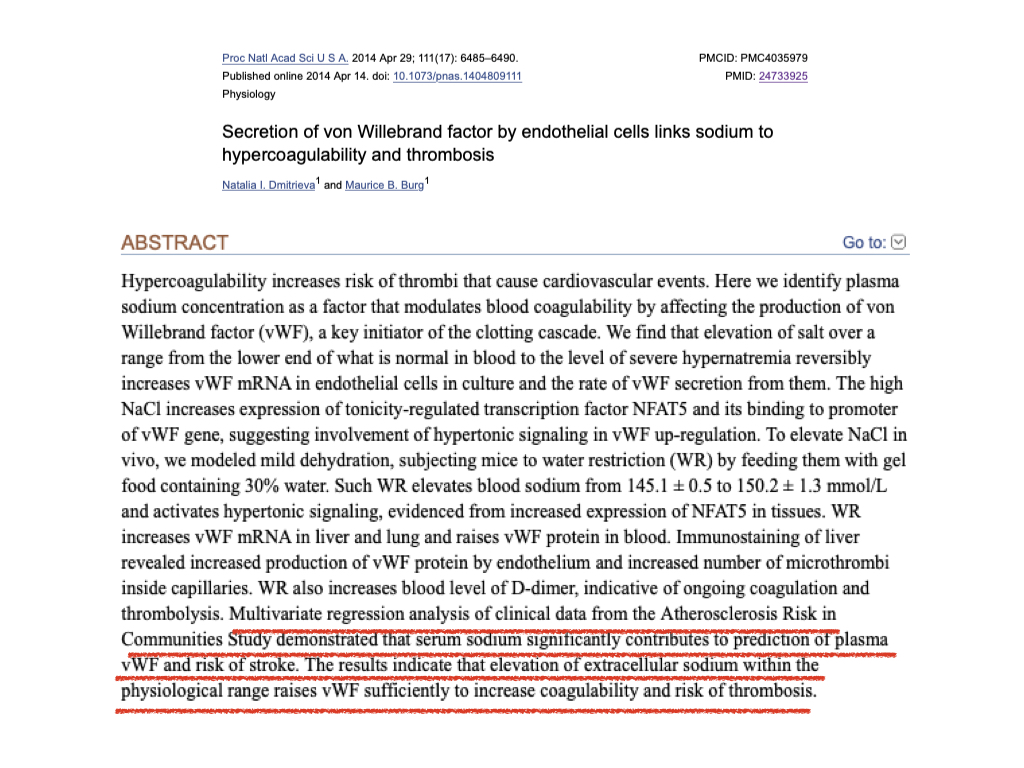 A 2015 study found that elevated extra cellular sodium (within the physiological range) and dehydration (which salt causes; salt is a dehydrating agent) increases endothelial stiffness and adhesion factors, and promotes inflammation and atherosclerosis. This team also analyzed data from the Atherosclerosis Risk in Communities Study (ARICS) and found that serum sodium is an independent predictor of 10 years risk of both coronary heart disease and stroke. 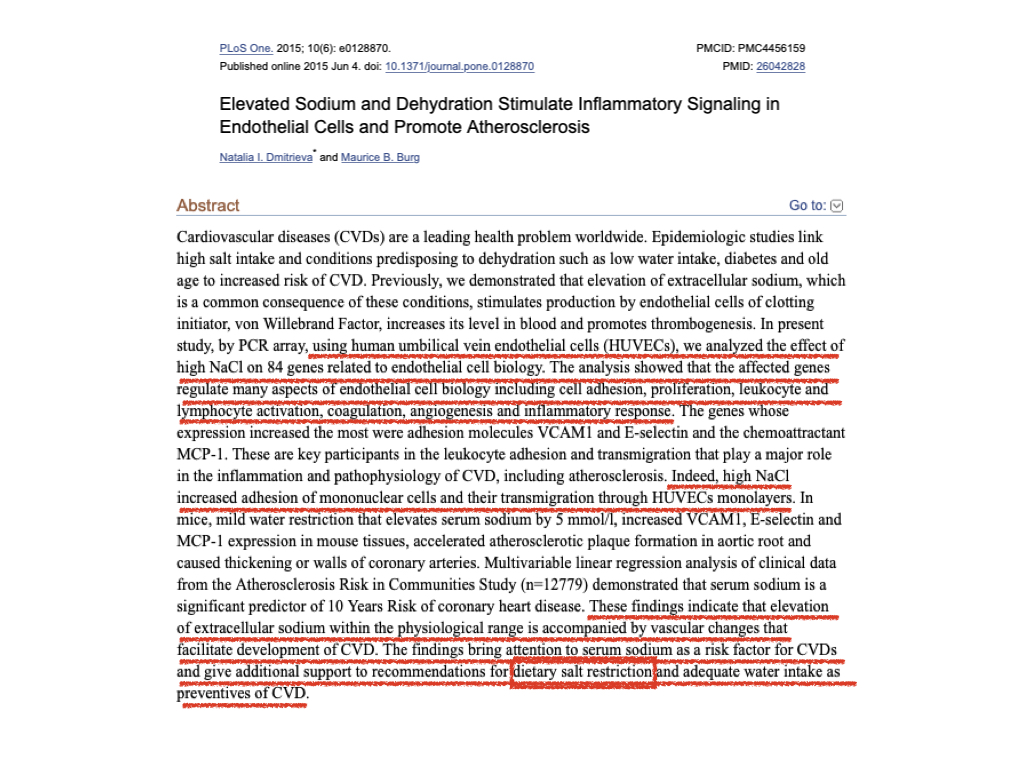 A 2021 study reported that, aside from younger age and a total cholesterol/HDL ratio <3.5 (i.e. high HDL), none of the traditional cardiovascular risk factors (such as low LDL) predicted/were associated with long-time absence of carotid artery atherosclerosis. Instead, serum calcium-phosphorus product, serum phosphate, and dietary sodium intake below 2300 mg/d were significantly associated with non-development of plaque. Of these mineral markers, low salt intake had the strongest association with long-term absence of plaque. The authors concluded that dietary and intrinsic minerals could be early contributors to arterial aging / atherosclerosis. In other words, this supports the idea that dietary salt promotes atherosclerosis (premature aging of arteries). 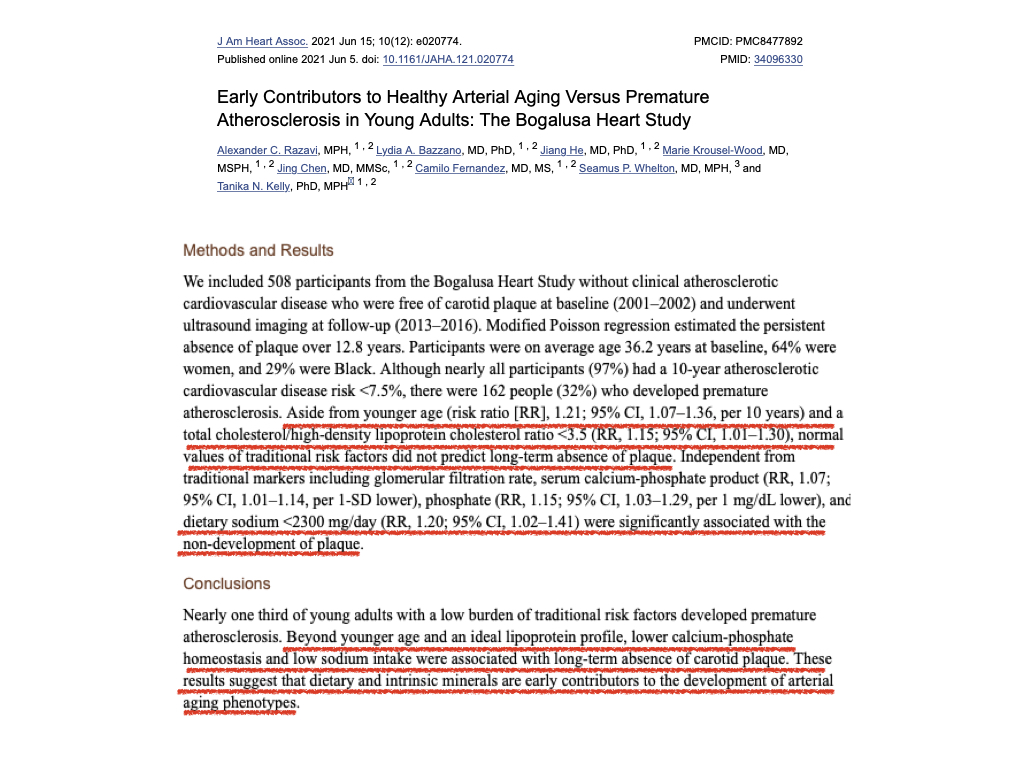 For some reason, the scientific community has acted as if sodium is the only active ingredient in salt and largely overlooked the fact that about 60% of salt consists of chloride.  This in spite of considerable evidence that chloride is responsible for known adverse effects of salt.     For example, non-halide salts of sodium, such as sodium citrate or bicarbonate, do not increase plasma volume, blood pressure, or urinary calcium loss.

The same is true when salt is added to living tissue.  In water, salt forms both sodium hydroxide and hydrochloric acid, both very corrosive agents.  This is why salt water burns the eyes, intensifies the pain of wounds, and corrodes concrete and metals.

All halogens, including chloride, are strong oxidizing agents.  This is why chlorine is used to kill bacteria and bleach fabrics.  The Merck veterinary manual states:

This oxidizing effect of chlorine and chloride is the reason we can use salt to kill bacteria and preserve foods.

A 2018 study  found that chloride activates the NLRP3 inflammasome that is associated with atherosclerosis, Alzheimer’s disease, type II diabetes, arthritis and other modern diseases.

Hence, evidence supports the conclusion that the chloride portion of salt promotes atherosclerosis.