Veganism Is Self-Contradictory and Immoral

But Ethical Vegetarianism is Not.

In this article I will prove that veganism (vegan ideology and ethics) is inherently self-contradictory and immoral.

Veganism – vegan ideology or ethics – maintains that we should have the same rules for treating animals as we have for treating other humans because, they claim, there exists no morally significant difference between humans and other species.  Humans and non-humans are "equal" because they suffer equally or because they are equally "subjects of experience."

But if there is no morally significant difference between humans and other species, if we are all moral equals, then there exists no basis for holding humans to a different standard than other species.

Alternatively, if all species are equal, you must hold all species to the same standard, and prohibit not only humans but also all other species from harming or killing other species to obtain food.  In this case you will be required to take extreme measures to control the behavior of non-human species.  You will be forced to maintain that it is morally wrong for mosquitos to feed on the blood of non-mosquitos, and take steps to prohibit mosquitos from sustaining their lives in this fashion.

In fact, it is Wolf Nature to favor wolves, Lion Nature to favor lions, and Human Nature to favor humans.  This was/is an absolute requirement for success as a biological entity.  Any species that valued other species more than itself would go extinct pronto.  You can’t change Nature by choice. 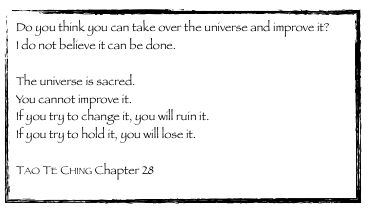 Moreover, if you maintain that we have no free will, i.e. no choice in the matter, then what is all this talk of altering our choices?  We may be as compelled to eat animals as the wolf.

In fact, attempting to convince humans to change their behavior by choice is an implicit admission of a belief that humans have free will and are not for example biologically compelled to eat meat.

To the point: this defense of veganism smuggles in a morally relevant difference between humans and non-humans.  In so many words, veganism (ideology and ethics) asserts that humans not only are different from, but morally superior to other species, because, the vegan claims, we can make choices to not harm other species, whereas other species can’t make a choice and are compelled to harm other species for survival.

But most importantly for my argument, if you require humans to adhere to a moral standard different from the standard applied to wolves, then you are ipso facto maintaining that humans have a moral status different from non-humans.

Now, it is obvious that veganism admits that this morally significant difference exists, because it as a matter of fact treats humans differently by holding us to a different moral standard than the standard applied to non-humans.

Further, veganism goes so far as to assert that vegan ideology is so superior to non-vegan morality that it should be mandatory for all people.  Therefore, veganism is inherently a tyrannical Statist ideology that maintains that vegans ("enlightened ones") not only have the right but the duty to use physical force (violence) to compel non-believers (infidels) to veganism.   The following post by a vegan doesn't even attempt to hide the threat to non-vegans: either embrace veganism or you will face prison or even death.  No power tripping here!

This vegan declares it is acceptable to kill humans to save animals: 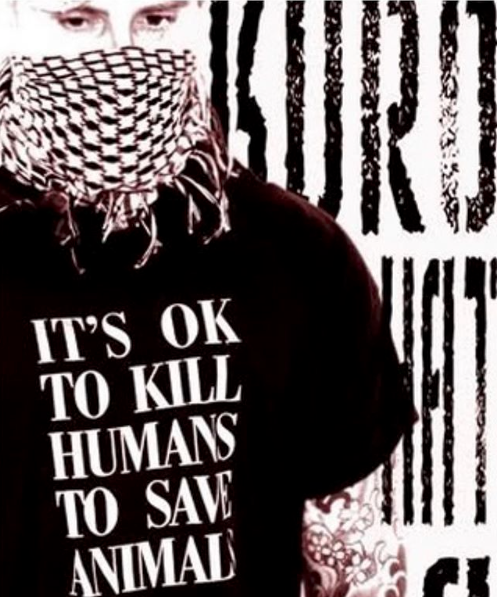 Thus veganism logically leads vegans to believe that they can use police forces armed with lethal weapons to enFORCE fines or taxes (i.e. robbery), ban meat-eating, imprison infidels in cages (jail), or even kill non-compliant individuals.  In short, veganism advocates a tyranny in which vegans have the power to coerce, enslave, torture or murder people who don't agree with their ideology ("laws").

And I submit that is why veganism is embraced by the "United Nations," an unelected gang that seeks totalitarian centralized control of the behavior of all people on Earth.   As typical for politicians, all of whom hold power by force and propaganda, they always try to market their power grab to the people through fear-mongering and pretending to seek increased power for themselves for the alleged benefit of the people from whom they wish to expropriate resources and power. 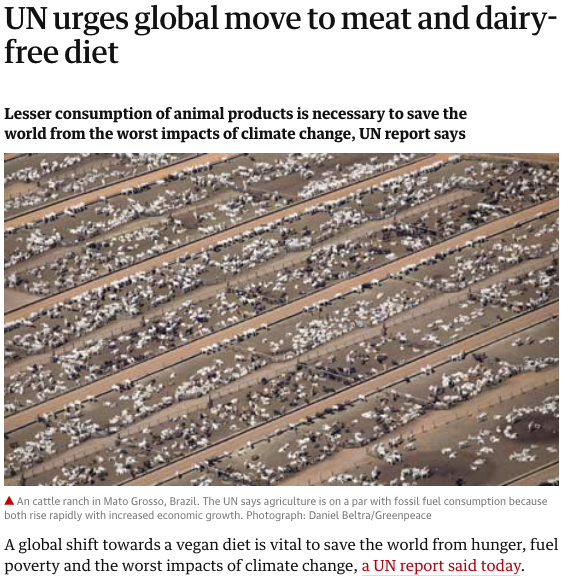 "The sky is falling! Give us more power and money and we will stop it from falling on you!"  If you think the "authorities" at the UN (or any other group of politicians) are beyond deception designed to make it appear that the sky is falling when it really isn't (known as false flags), in order to scare you enough to get you to consent to their demands, and relinquish resources and autonomy, then you are incredibly naive.  I suggest you read Machiavelli's The Prince for a start.  A brief summary from Wikipedia:

Thus, veganism is wrong in both meanings of that term:  false, because not aligned with Nature (Truth, Reality), and immoral because it maintains that some humans – allegedly vegan "authorities" – have a legitimate right to use violence or threat thereof to coerce or force other humans to behave in allegedly "preferable" ways.

Morality and ethics are applicable only to human society, to regulate human relationships and establish a harmonious human community.  Morality is inherently reciprocal; I agree not to initiate violence against others only so long as they agree to and actually do abstain from violence against me.  Violence includes theft, coercion, fraud, trespass (including sexual trespass, i.e. rape), assault and murder.  However, if someone violates me, s/he forfeits status as a moral equal,  and I claim my natural right to use whatever force necessary, up to and including lethal force, in self-defense, to stop the perpetrator from violating me.  Children and other dependents are protected as members of a living family or community.  For example, attacking a child is attacking the child's parents, grandparents, siblings and every other living person who cares for that child.  (A child is a biological re-presentation of his/her parents, which is why healthy parents love their children as much as they love themselves.)

Veganism is a form of pathological altruism aimed at destroying humanity – or a particular ethnic group – in subservience to non-humans.  Veganism asserts that some humans – vegans – are free of error and evil tendencies and therefore qualified to tell the rest of us what we should do.  As I have shown, veganism is neither free from error nor from evil tendencies.  Veganism is most dangerous because it convinces vegans that they are morally superior to other humans especially if they are willing to kill humans – even their own children – to "save animals." 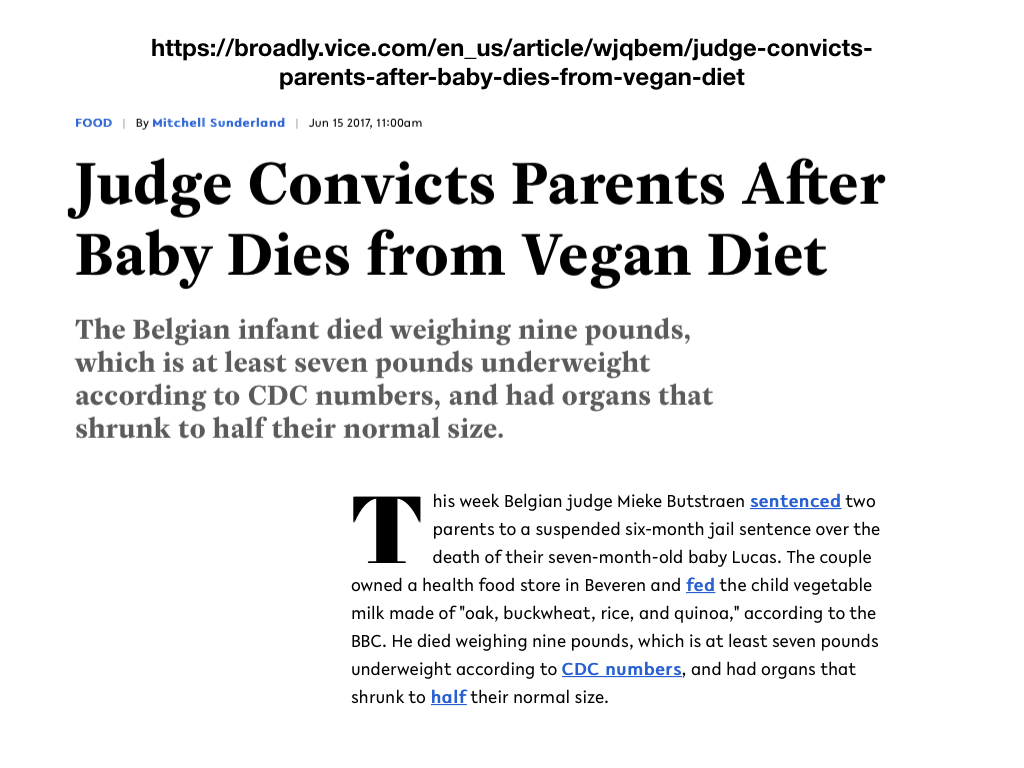 Since writing the above critique of veganism, I have encountered an argument for vegetarianism (not veganism)  by Sri Dharma Pravartaka Acharya, which I believe avoids the errors of vegan ideology.  He presents the arguments of Sanatana Dharma in favor of moral concern for animals in this video:

Here are the key elements of the argument :

1.  First, Sanatana Dharma fully recognizes that humans are superior to animals in many ways.

3. Sanatana Dharma resolves the contradiction evident in vegan ideology by pointing to the human ability to make a choice about whether to eat other animals or not as the very source of moral superiority.  That is, a man can eat other animals, but he becomes morally superior to meat-eating animals only if he does not eat meat.

This is a subtle but very important difference from what I took to be vegan ideology.  I argued above the vegan ideology maintains that man has a moral superiority to other animals simply because he has the ability to choose not to eat meat, regardless of whether he chooses to avoid eating meat or not.  In contrast, Sanatana Dharma maintains that a man has a moral character no different from an animal if he chooses to eat meat when it is unnecessary to do so, and becomes morally superior to other animals only if he chooses not to eat meat whenever possible to do so.

4.  Acharya maintains that all anti-vegetarian arguments make one central mistake, that being confusing moral agents with objects of moral concern.  I have to admit this is true of my argument above.  Essentially I argued that since animals do not have moral agency (can't act on moral principles) they do not qualify to be objects of moral concern.

Cows, chickens, pigs, lambs, goats and other animals raised for meat all lack moral agency but this does not mean they do not suffer.  On the contrary it is obvious that they do suffer.  This is due to their all having sense organs and consciousness.  Each animal is some-One. Therefore we owe every animal the same respect given to every baby, mentally disabled person, or elder suffering from dementia.  We don't eat any of those humans so what right do we have to eat any animal having greater cognitive capacity than a human fetus or infant?  None that I can see at this point.

Indeed, I myself have argued and proven that the awareness of every one is but a limited expression or aspect of One Infinite Self consisting of Awareness.  If one not only intellectually sees but also genuinely feels that everyone is an aspect of One Self, then how can one bear to harm anyone? 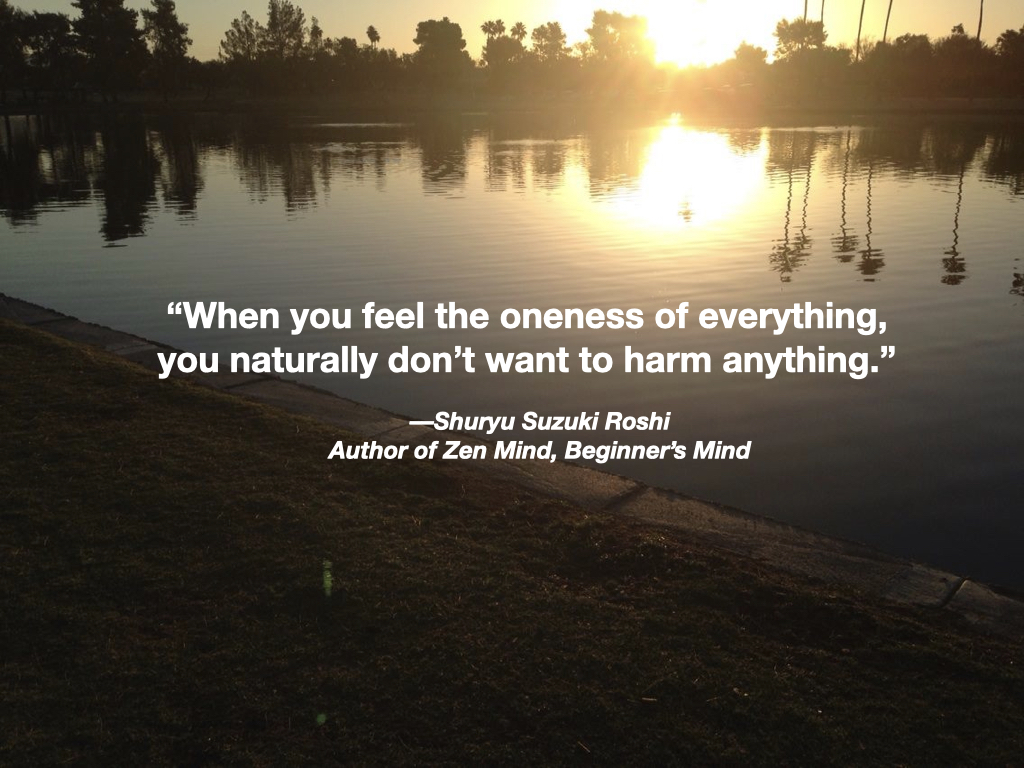 Sanatana Dharma differs significantly from vegan ideology in maintaining that using milk products is not a violation of the moral principle of avoiding unnecessary harm.  Since there is no harm inherent in taking the excess milk production of a cow or other female animal, Sanatana Dharma approves of using dairy products.